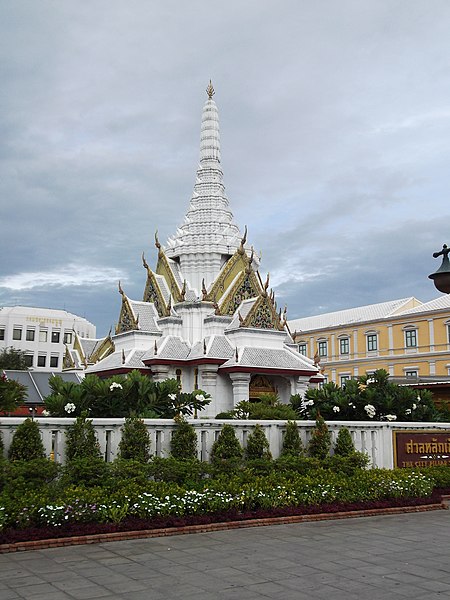 Bangkok and Thailand in astrogeography

Though the City of Bangkok was founded as the new capital of Thailand not before 1782 its astrogeographical resonance coordinates are to be considered as important resonating degrees of the Thai nation, national morphic field and territory since the beginning of history.

During the foundation of the first independent Thai kingdom in 1238 Neptune as indicator of spirituality and of territorial instability occupied 8°Gemini the exact astrogeographical position of the future capital Bangkok. This coincidence of the position of Neptune in conjunction transit with the resonance coordinate of Bangkok, Ayutthaya and the Chao Phraya River valley in the central region of Thailand explains territorial instability as a main factor during the foundation of Thailand.

Astrogeographical position of the City of Bangkok for morphogenetic field level 1 which describes the international, supra-regional resonance of the capital of Thailand concerning its government, politics and the center of the national morphic field (nation): the astrogeographical resonance coordinates of the Bangkok are 7°Gemini and 29°Aries.

The Foundation Chart for Bangkok

After the destruction of Ayutthaya King Taksin the Great relocated the capital to the City of Thonburi the origin of Bangkok located just 70 km south of Ayutthaya in 1767.

In 1782 King Rama I. moved the capital from the Thonburi area just a few kilometres north across the Chaophraya River to the current location of the royal palace, shrines and institutions which was given the name Bangkok.

The full title given to the new capital was: “City of devas, great city and residence of the Juwel of Indra the Emerald Buddha, unconquerable city of this god great capital of the world, garlanded with precious stones, rich of tremendous royal palaces, that resemble the heavenly abode of the reincarnated god Stadt, city given as a present by Indra and built by Vishvakarman.”

The City of Bangkok was founded through an important ceremony on 21 April 1782. King Rama I personally erected the first sacred city pillar in the Lak Mueang shrine, which is believed to house Chao Pho Lak Mueang (เจ้าพ่อหลักเมือง) the city spirit deity.

The pillar functions as a kind of an acupuncture needle that is used to ground and center the new royal area, city of Bangkok and the new kingdom. Compare my articles: The Dublin Spire and The astrogeography of the Leaning Tower of Pisa.

Astrogeographical resonance coordinates of the city pillar shrine and heart of Bangkok for morphogenetic field level 4 (exact position): the shrine is located in the combination of self-protective earth sign Virgo sign of reason, health, medicine, hospitals, storing goods, saving money, protection of nature with dynamic fire sign Sagittarius sign of arrow and bow, shamanism, priest-castes, healing, mental religion, initiation and indicator for the round and conic shape of the building and also of the arrow like pillars.

The magical city pillars of Bangkok inside the City pillar shrine (หลักเมือง, Lak Mueang) of Bangkok, Thailand is made of Chaiyapreuk (acacia) wood. The pillar functions as a kind of an acupuncture needle, totem pole and sanctum sanctorum that is used to ground and center the new city and kingdom and its ritual worship. The taller pillar is Rama I’s original, the shorter was added by King Mongkut (Rama IV).

In 1852 a 2nd shorter pillar was added by King Mongkut (Rama IV) himself a studied monk and astrologer with a new horoscope placed inside. The new pillar and horoscope were to guide and protect the nation in dealing with the encroaching colonial powers. (source).

From the early 9th century the territories of modern Thailand were ruled by the Khmer Empire with their capital at Yasodharapura (Angkor).

The Khmer Empire is assumed to have been founded by King Jayavarman II in 802 A.D. after breaking the rule of the Javanese Shailendra dynasty (Cham people) over the Siamese peninsula with their Siamese capital at Indrapura (today Đồng Dương in Vietnam).

Jayavarman II himself was supposedly of Javanese origin. Jayavarman II conducted a hinduistic consecration ritual on sacred Mount  Mahendraparvata (“Mountain of the Great Indra” – 33 km North-East of Angkor) to celebrate the foundation of the new Khmer Empire. Through that ceremony Prince Jayavarman II was proclaimed a universal monarch and God King.

Astrogeographical position of the City of Sukothai for morphogenetic field level 1 which describes the international, supra-regional resonance of the first capital in Thailand: one coordinate is located at 27° in earth sign Taurus and 12° in air sign Aquarius.

The first foundation of a larger independent Thai state was the Sukothai kingdom that existed in the area around the City of Sukhothai in north central Thailand from 1238 until its union with the Ayutthaya Kingdom in 1438. Before that Tai kingdoms existed in the northern highlands including the Ngoenyang (centered on Chiang Saen, predecessor of Lan Na) kingdom and the Heokam (centered on Chiang Hung, modern Jinghong in China) kingdom of Tai Lue people. The secession of Sukothai from the dominant Khmer Empire in Yasodharapura (Angkor) began around 1180.

Astrogeographical position of the City of Ayutthaya for morphogenetic field level 1 which describes the international, supra-regional resonance of the 2nd capital in Thailand: the resonance coordinates of Ayutthaya are 7°Gemini and 16°Aries.

The Ayutthaya Kingdom (also spelled “Ayudhya” relating to the birth city of Hindu god Rama in Northern India) was a Siamese kingdom that existed from 1350 to 1767 centered on the city of Ayutthaya. The city was founded by King Uthong (Ramathibodi I) on an island on the intersection of three rivers: Chao Phraya River, Lopburi River and Pa Sak River. Ayutthaya faced several Burmese invasions and 2 conquests: the first Fall of Ayutthaya in 1569 which made the City a vassal state and the 2nd Fall that ended the kingdom and destroyed the city in 1767.

The 1st Fall of Ayutthaya had occurred in the Burmese-Siamese War of 1568/69 without heavy tension through planetary transits from the outer planets. Contrary to the circumstances during the 2nd Fall of Ayutthaya the only intense planetary tension to the astrogeographical resonance coordinates of Ayutthaya (7°GEM/16°ARI) and Bangkok (8°GEM/29°ARI) through one of the 12 systemical planets was the exact square from Mercury at 6°Virgo. This aspect from Mercury the planetary indicator of the thieves, liars and spy castes reflects the historical account that the city gates of Ayutthaya were opened by a spy.

The transit situation during the 2nd Fall of Ayutthaya was far more problematic for Ayutthaya and Bangkok.

The Burmese–Siamese War (1765–1767) or “war of the second fall of Ayutthaya” was the second military conflict between the Konbaung dynasty of Burma  (Myanmar) and the Ban Phlu Luang Dynasty of Siam (Thailand) and the war that ended the four-century-old Ayutthaya kingdom of Siam. It ended on 7 April 1767 when the Burmese sacked the starving city for the second time in history.

The Siamese Revolution of 1688 was a major popular upheaval in the Siamese Ayutthaya Kingdom which led to the overthrow of the pro-French Siamese king Narai, the installation of an anti-European government, the Siege of the French Fortress in Bangkok and the eviction of French troops from Thailand and the long-term effect of preventing future colonization through the European global players.

The 1932 revolution was launched by a coalition of the Khana Ratsadon (“Peoples’ Party” founded on 5 February 1927), the first political party in Siam with a comparatively small group of military leaders. The 1932 revolution resulted in a nearly-bloodless transition of Siam from an absolute to a constitutional monarchy system of government, the introduction of democracy and the first constitution of Thailand and the creation of the National Assembly of Thailand,

The fact that the revolution was begun before Uranus – at 23°Aries – had reached the 29°Aries resonance coordinate and position of Bangkok points at the goodwill of the military to stage a smooth and peaceful Coup DEtat instead of waiting for a more problematic situation to come. This can be taken as an example of how early Uranus manifestations can help to solve issues quickly.