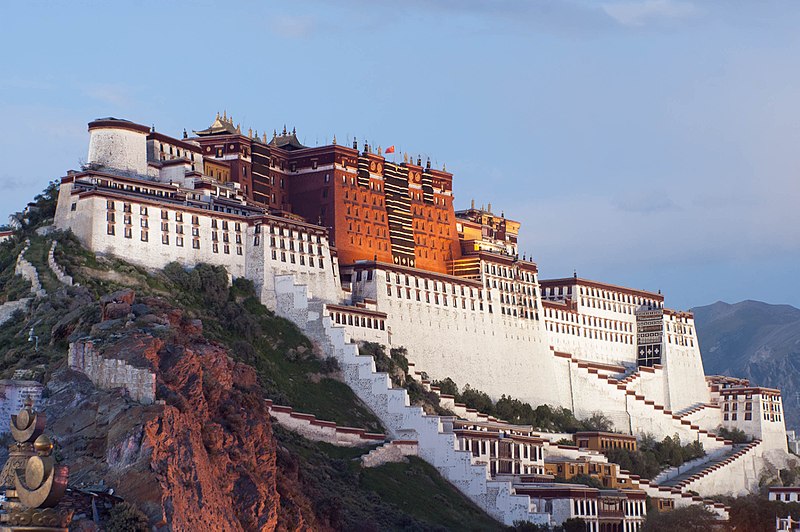 Related articles: The Mahabodhi Tree in Bodh Gaya, Samye Gompa the oldest monastery in Tibet, The White Horse Temple – The first Buddhist Temple in China, The Mahabodhi Temple Tower in Aries, A Monumental Buddha Maitreya Statue in Scorpio, Mount Kailash in Cancer with Capricorn, The mystical buddhist university of Nalanda in astrogeography,  The Longmen Grottoes at Luoyang,

The astrogeographical position of Lhasa

Astrogeographical resonance degrees of the City of Lhasa for morphogenetic field level 1 which describe the international, supra-regional topics of the capital of Tibet and center of the national morphic field: Lhasa is located at 14°Aquarius and 9°Aries. Especially the 14°Aquarius position of Lhasa is reflected in the important events of Tibetan history.

The parallel with the astrogeographical positions of Jerusalem at 2°Aries and 18°Aquarius is remarkable. Both capitals are absolute centers of their respective religions and both are nations that are subject to foreign territorial claims.

The palace is named after Mount Potalaka, the mythical abode of the bodhisattva  Avalokiteśvara which is believed to exist in the seas south of India. The 5th Dalai Lama started its construction in 1645. It has served as the winter palace of the  Dalai Lamas from 1649 to 1959 and has been a museum since then.

Astrogeographical position of Potala Palace building for morphogenetic field level 3 (surrounding area) which describes the atmosphere and energetical topics of the palace hill and its surrounding area:  The astrogeographical resonance coordinate in Leo the sign of the centralism, kings, palaces and magnificence stands for the ideal of the Dalai Lama as the king of Tibet and the Potala Palace as his central residence. The 2nd coordinate is in Cancer the sign of emotional self-experience, individuality, independence and authenticity as a major aspect of Buddhism often associated by Hindu astrologers with Gautama Buddha. Plus that Cancer as the sign of the ancestor lines relates to the topics of the conscious connectedness of the Dalai Lamas with the line of ancestors of the rebirth of the Buddha Avalokiteshvara.

In regard to the qualities of the Buddha Avalokiteshvara the resonance coordinates of his seat in Lhasa combine Leo the sign of the sun, light, heart, power plants, birth, self-expression and energetical centers with Cancer the sign of the moon, motherhood, fertility. pregnancy and the experience of emotional identity.

The Exile of the Dalai Lama in Mc Leod Ganj, India

Astrogeographical resonance degrees of the seat of Mc Leod Ganj, India for morphogenetic field level 1 which describes the international, supra-regional topics of the exile capital of Tibetans and the center of the national morphic field in exile: the place is located at 16° Leo and 7°Aquarius.

The foundation of the Tibetan Empire in 618

The Tibetan Empire existed from the 7th to 9th centuries AD when Tibet was unified and expanded as a large and powerful empire, and ruled an area considerably larger than the Tibetan Plateau, stretching to parts of East, Central and South Asia. Its foundation began with the reign of Songtsen Gampo the 33rd King of Tibet. Songtsen Gampo is traditionally credited with the introduction of Buddhism to Tibet influenced by his Indian Dynasty (Lichavvi ) – Nepali and Chinese queens as well as the creation of the Tibetan alphabet and therefore the establishment of Classical Tibetan.

The foundation of the Tibetan Empire in the year of 618 occurred during the transit of Uranus the planet of globalization in exact opposition to the 14°Aquarius position of the center of the future national morphic field in Lhasa.

The opposition transit of Uranus the ruling planet of the 14° Aquarius coordinate of Lhasa resonates with the fact that the globalization of Tibetan culture and politics was planned and decided for from inside the nation and country. This also means that it was not an effect of foreign occupation.

The Mongolian occupation of Tibet in 1240

The first confirmed campaign was the invasion of Tibet by the Mongol general Doorda Darkhan in 1240. In the late 1240s Mongolian prince Godan invited  Sakya Pandita and other leading Tibetan figures to submit to Mongol authority. This is considered to have marked the beginning of Mongol rule over Tibet, as well as the establishment of patron and priest relationship between Mongols and Tibetans.

These relations were continued by Kublai Khan, who founded the Mongol Yuan dynasty and granted authority over whole Tibet to Drogon Chogyal Phagpa, nephew of Sakya Pandita The Sakya-Mongol administrative system and the Yuan dynasty`s administrative rule over the region lasted until the mid -14th century,

Saturn the ruler of stability, governments, autonomy and self-responsibility at 13°Leo was exactly opposite the 14°Aquarius resonance coordinate of Lhasa during the winter solstice of 1240 explaining the Mongolian occupation of Tibet as as the beginning of an intense challenge to Tibet with an option for cooperation with a foreign invader.

The validity of the chart for the winter solstice of 1240 is supported by the stunning conjunction of Venus the planet of possession of territory, markets, food, wealth with the Moon indicator for the center of the national morphic field at 17°Sagittarius exactly conjunct Beijing. Assumed that the winter solstice of every year shows its aims, climax and realities effectively created the Mongol invasion seems to have caused a lasting transfer of Tibetan autonomy onto Beijing. The chart may therefore be taken as a fundamental chart for the Chinese rule over Tibet.

A natal chart for the Title of the Dalai Lama: the chart for the summer solstice of the year 1578 with Neptune the planet of spirituality and destabilization of territorial autonomy at 9°Cancer in exact square to the 9°Aries resonance coordinate of the Tibetan capital in Lhasa. This transit of slow moving Neptune was active for 3 years.

The chart for the summer solstice of the year 1578 shows a fascinating analogy regarding the Neptune transit exactly square to Lhasa and in relation to capitals during similar events in European history in which the head of the catholic church in Rome (the Pope) was accepted as the spiritual authority over the state religions of Germany and Poland. One event was the coronation of King Otto I as Roman Emperor in 962 A.D. with Neptune square to the future center of the national morphic field of Germany in Berlin. The 2nd was the birth of Catholic Poland under a Neptune-Uranus conjunction over Warsaw in 966.

Neptune the planetary indicator of spirituality at 8° Cancer was in exact square to the 9°Aries astrogeographical resonance coordinate of Lhasa during the summer solstice of 1578 explaining the step as a transfer of control over Tibetan spiritual authority and to some extent also of territorial autonomy on to the Mongolian occupators as the deal between the new Dalai Lama included his collaboration with the Mongolian authorities.

The Treaty of Lhasa of 1904 with Saturn conjunct the City

The Treaty of Lhasa was signed on September, 7 1904 between Tibet and the United Kingdom of Great Britain and Ireland, in Lhasa, the capital of Tibet, then under administrative rule of the Qing dynasty.

It was signed following the British invasion into Tibet of 1903-1904 whose purported mission was to establish diplomatic relations and resolve the dispute over the border between Tibet and the British occupied Sikkim.

The exact opposition of Mars to the 14°Aquarius coordinate of Lhasa from 14°Leo shows the acute military threat to Lhasa exerted by the far superior British troops in town. But at the same time the British presence seems to have supported and allowed a certain independence of Lhasa from the Qing dynasty in Beijing. This can be concluded from the simultaneous transit of Saturn over the 14°Aquarius resonance degree of Lhasa. Saturn represents a factor which when in conjunction with capitals points at events of stabilization of autonomy, laws and administration, and the independence from foreign control.

The chance for Tibetan independence came after the collapse of the Qing Empire in 1912 which led to the period of the Kingdom of Tibet between 1912 and 1951. Although Tibet became factually independent China never gave up the claims to colonial rule over the Tibetan nation and territories.

The official Tibetan declaration of independence was made with Venus the planet of possession of territory, roots and markets at 10°Aries exactly conjunct the 9°Aries resonance coordinate of Lhasa. This aspect points at the factual autonomy gained. At the same time Jupiter made an exact square to Venus over Lhasa from 9°Capricorn the sign of laws, effective factual reality and governments pointing at the fact that according to international law Tibet did not not gain legal independence from China through the declaration of independence.

The chart for the Communist Chinese annexation of Tibet

The political and military aggression of the Communist Chinese State can be understood through the Mars-Pluto conjunction between 15° and 17°Leo from the day of its foundation on October, 1 1950. This planetary constellation being in exact opposition to the center of the national morphic field of Tibet in Lhasa explains why one of the first attacks of Red China went against Tibet and why it was directed against the Tibetan national morphic field, its spiritual and cultural identity and autonomy.

The occupation and annexation of Tibet in the aftermath of the foundation of Communist China in 1949 came with Pluto the planet of dogma, ideology, trauma, pain, dominance, hierarchy, suppression of identity and individuality at 17°Leo in exact opposition to the 14°Aquarius resonance coordinate of Lhasa.

The Tibetan Uprising of 1959

The 1959 Tibetan uprising began on 10 March 1959, when a revolt erupted in Lhasa, the capital of the Tibet Autonomous Region, Armed conflict between Tibetan guerillas and the People’s Liberation Army (PLA) had started in 1956 in the Kham and Amdo regions, which had been subjected to socialist  reform.

The Tibetan Uprising of 1959 is another outstanding example for the intense resonance of transits of the outer planets in exact opposition to the 14°Aquarius resonance coordinate of Lhasa. This time Uranus the planet of globalization in conflict with the center of the national morphic field of Tibet points at the central issue of the introduction of socialist reforms by the Chinese Communist Party aimed at the destruction of the traditional Tibetan society, cultural inheritance, priest caste, spirituality and national identity.