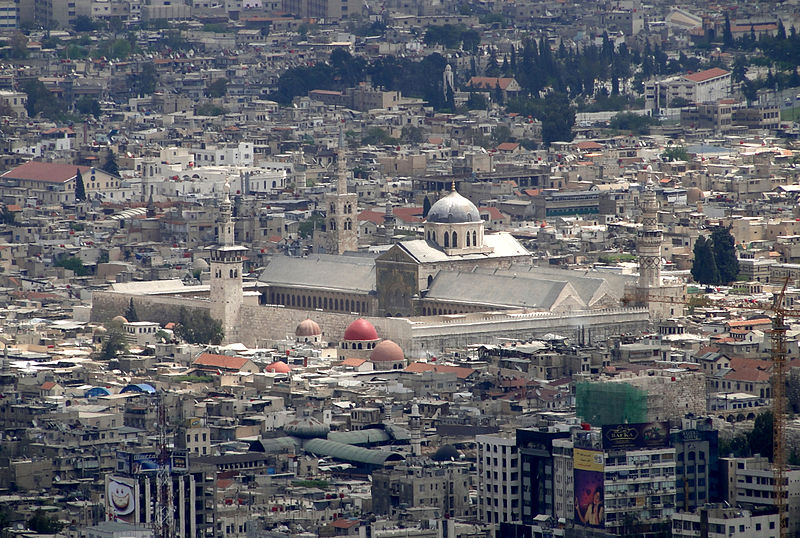 The Syrian Civil War caused an estimated 400.000-600.000 deaths and over 5 Million refugees. The military, financial, logistic and propagandist support of the violent uprisings against the Assad regime from abroad is to be considered as the main reason for this deadly Civil War. The USA and their allies Saudi Arab and other Sunni countries, leading EU countries and Israel who all supported the war against the Syrian government are to be seen as fully responsible for supporting a war that brought nothing to solve humanities problems but only destruction, hate, negativity and the rise of fascism. The hate between the ethnic groups inside the country had been known and the dimension of violence was calculable right from the beginning.

Astrogeographical position of Damascus for morphogenetic field level 1 which defines the supraregional, international role of the Syrian
capital and important resonating aspects of Syrian governments:
Damascus is located with one coordinate at 5°in earth sign Capricorn and the second at 16° in fire sign Aries.

The demonstrations that began the Syrian Civil War started from 15 March 2011 only 5 days after Uranus´ ingress into Aries which triggered the energetical and political topics of a square position of Uranus to the astrogeographical coordinate of the Syrian capital Damascus at 5°Capricorn. At the same time Pluto at 6° Capricorn was conjunct that position of Damascus. The climax of Pluto`s transit in a square position to Damascus lasted from January 2010 (4°Cap) and December 2012 (8° Cap).

The astrological chart for the start of the civil war in Syria shows Pluto at 7° Capricorn conjunct the 6°Capricorn astrological position of Damascus. Saturn – the sign ruler of Capricorn at 15°Libra was exactly opposite the 16°Aries astrogeographical coordinate of Damascus. Uranus seen here conjunct the dark moon Lilith indicator for the “karmic invoices of hate” among the Syrian population had just ingresses into Aries triggering the upcoming Uranus-Pluto square – the “mother constellation” for the Syrian Civil War.

Stage 1: The simultaneous Pluto conjunction and Uranus square to Damascus` 5°Capricorn position between December 2010 and March 2013

The Syrian civil war began during the transit of Pluto in exact conjunction to the 5° Capricorn coordinate of the Syrian capital Damascus (Dec 2010 – Nov 2012). 3 months after this Pluto transit Uranus´s ingress into Aries in March 2011 triggered the full impact of the coming Uranus – Pluto square. Another 3 months later Uranus started his transit of the exact square position to the 5°Capricorn position of Damascus between June 2011 – March 2013. This pressure from Uranus reached its first climax between June and August 2011 with Uranus stationary at 4°Aries.

The role of the US government and other global players

The astrogeographical position of Damascus at 5° Capricorn falls in an exact opposition to the US capital Washington located at 6° Cancer. Therefore the effects of simultaneous and extremely heavy astrogeographical transits of Pluto over 5° Capricorn and Uranus over 5° Aries between 2010 and 2013 put both capitals and governments under strongest pressure at the same time even though partly in contrary directions.

The Pluto opposition to Washington could mean that the US initiative to promote Civil War in Syria in order to further destabilize the Middle East, Africa and Europe was a projection of the  USA`s profile neurosis. Foreign Minister Hillary Clinton supposedly born with sun and ascendant in Scorpio the leader in US foreign politics at the time seems to have played a strong role in the Pluto opposition to the US capital and government. But not alone of course. Other elements that worked to destabilize the Obama Presidency and were determined to continue the deadly US foreign politics started with the Iraq War must have been the neofascist lobbyism (Tea Party Movement) that had taken over control over the influential Republican Party under the Pluto opposition to Washington since 2010.

The 2nd extremely dramatic stage in the tight transits of the Uranus and Pluto square in relation to Damascus came between April 2015 and November 2018:

The climax of the tension from the Uranus transit in conjunction (Apr 2014 – Mar 2016) and from Pluto in a square (Dec 2014 – Nov 2018) to the 16°Aries astrogeographical longitude coordinates of Damascus and other important cities in Western Syria located between 15° and 20°Aries (astrogeographic positions) lasted from April 2014 until November 2018.

The intervention of the Islamic State (ISIL) in Syria in the summer of 2014 with the Siege of Kobani seemed the climax of the threats to the government in Damascus. The attacks of ISIL came under the transit of Uranus in conjunction to Damascus.

The fact that this was Uranus` transit first return to Aries since the era of establisment of Hitler fascism between 1927-34 clearly explains the correspondence between the intervention of the extremely brutal, fascistoid and fast moving ISIL fighters and Uranus` transit over Damascus.

But the invasion of pseudo-islamic fascism in Syria had side effects which in the long run terminated with US and European support for the Syrian rebels paving the way for the Russian intervention which came as late as September 2015 but decided the Syrian war once for all.

Though not openly welcomed by the USA and their European alliance the Russian Intervention in the Syrian Civil War came with Venus at 24°Leo conjunct the astrogeographical position of Washington. This transit could actually seem like an unofficial support for the Russian intervention from the US government. This and the fact that the USA was simply unwilling and unable to send troops to Syria brought the chance for the US to retreat after their mission of destruction of Syria, the spreading of terrorism all over Africa and Europe, the destabilization of the EU through the Syrian refugee crisis and the spreading of neo-fascism all over the planet seemed to have been fulfilled.

The fact that the climax of tension to Damascus from the Uranus and Pluto transits will be over in November 2018 could in fact mean that the era of the Syrian Civil War will be over for the moment.

Astrogeographic coordinates of Idlib for morphogenetic field level 1 which describes the supra-regional, international level of resonance of the town:  one coordinate is at 19°Aries the other at 8°Scorpio.

Idlib was captured by Syrian Rebel armies in the 2nd battle of Idlib between 24 and 28 March 2015 with Uranus on 15°Aries only two months before Uranus` exact transit over the 19° Aries coordinate of the town.

The attack on the last rebel stronghold in Syria through the Syrian Army supported by Russian airstrikes was started on 4 September 2018 during Pluto´s last transit over the exact square position to the 19°Aries coordinate of  Idlib.

Pluto had been transiting over the 19°Capricorn position in exact square to the 19°Aries coordinate of Idlib since January 2017 (17°Cap). The last exact transit of the degree will occur in November 2018.