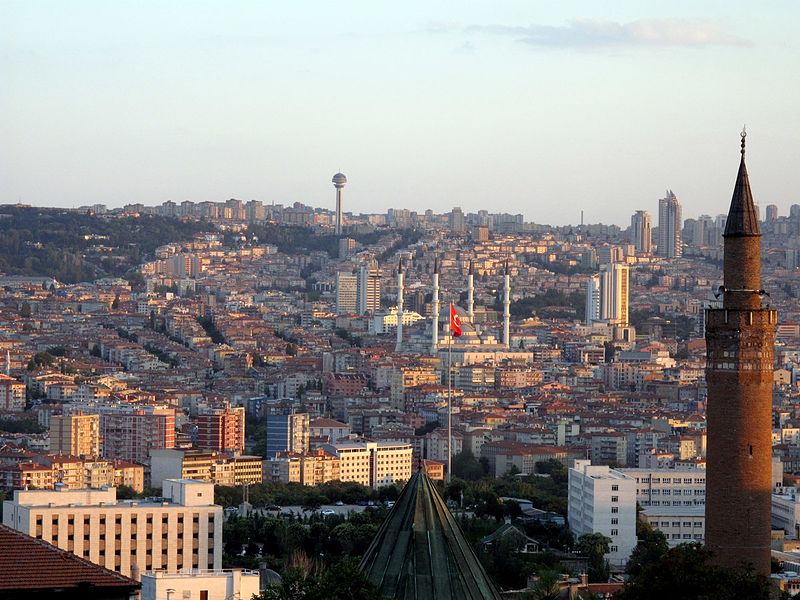 The astrogeographical position of Ankara and the transits of the outer planets in relation to the central government of Turkey.

The astrogeographical position of Ankara

The foundation of settlements at todays Ankara goes back to Hittite and Phrygian eras. In 278 BC, the city, along with the rest of central Anatolia, was occupied by a Celtic group, the Galatians, who were the first to make Ankara one of their main tribal centers, the headquarters of the Tectosages tribe.

Astrogeographical position of Ankara for morphogenetical field level 1 which describes the international, supraregional resonance of the turkish central government: The Turkish capital Ankara is located at 3° of spiritual water sign Pisces sign of imagination, mystification, hiding, temples, fairy tales, legends, the dream world, mystification, spirituality and particularly in politics an indicator for corruption. The 2nd coordinate is located 2° of highly centralist, royal fire sign Leo the sign of the super-centralist mega states, absolutism, kings and king-presidents, sun, light, heart, self-esteem, power stations, gold, magnificence, profile neurosis and an indicator for the appeal to the rule of the central government over federal issues.

The 2° Leo resonance coordinate of Ankara makes the capital, government, nation and national morphic field of Turkey part of a global constellation of tension, confrontations and challenges through:

Natal and foundation charts for Turkey

Saturn conjunct Ankara during the summer solstice: The foundation of the Ottoman Empire in 1299

The foundation and rise of the Ottoman Empire is a period of history that started with the emergence of the Ottoman principality in central Anatolia in c. 1299, and ended in 1924.

Saturn the planetary indicator of stabilization of autonomy, government structures and the ruling dynasty, castes or groups moved conjunct the 2°Leo astrogeographical resonance coordinate of Ankara during the foundation process of the Ottoman Empire in 1299.

The Turkish Republic of Kemal Atatürk

On October 29, 1923, the National Assembly declared Turkey to be a republic and Mustafa Kemal Atatürk was elected as its first president. The caliphate was abolished on March 3, 1924, and all members of the Ottoman dynasty were expelled from Turkey. A full republican constitution was adopted on April 20, 1924. The constitution retained Islam as the official state religion until in April 1928 also this clause was removed, and Turkey became a fully secular republic.

The transit of Saturn over 3° Sagittarius in a square to the 3° Pisces astrogeographical position of Ankara in February and October 2015 was used by the turkish President Erdogan for further attacks on the turkish democracy, constitution and the political and national inheritance of Kemal Atatürk.

At the same time the turkish government got under intense pressure through the terrorist attacks by the Islamic State – a terrorist organisation developed in Iraq and Syria with the help of the American, Turkish and Saudi-Arabian governments with intention to destabilize Iraq and Syria.

For a deeper investigation of the impact of the Ankara positions in turkish history there is a long line of events before and during the Erdogan era to be recalled. The shootdown of a Russian Jet over Syrian territory by  a Turkish Airforce Fighter on 24 November 2016 during the Sun, Mercury, Saturn conjunction between 2° and 6° Sagittarius in a square to Ankara is one of them.  This attack on friendly Russia – a major business partner was apparently simply done for Erdogan´s propaganda purposes but did cause an eight-months ice-age between the two countries.  The fact that this attack was carried out during Saturn´s square to Ankara is an indication that the pressure on the turkish capital, independent parliament, democratic constitution and national inheritance of the Atatürk political system is actually carried out through the country`s president himself..

The ingress of Neptune as the sign ruler into Pisces in March 2011 brought im a victory in the elections of 12 June 2011.  On 29 August 2014 Erdogan was even made President of Turkey with Neptune transiting in exact conjunction with the Sun position in his birth chart..

Erdogan had come to power one day after Uranus` ingress into Pisces and into conunction with Ankara. Now that Uranus has ingressed into Taurus activating a square to the 3°Leo position of the turkish capital Erdogan faces what could become the biggest crisis of his rulership over Turkey since 2003. A recent example for the intensity of Uranus` transit in a square to capitalsand governements is the example of the Brexit vote of 2016 during Uranus` transit in exact square to the british government in London.

The Trump announcement that the USA will impose new custom duties on steel and alumium imports from turkey on 10 August caused a strong and immediate devaluation of the Turkish currency Lira. Another heavy blow for the turkish economy after the near termination of EU tourism through the effects turkish pressure on EU citizens travelling in Turkey since 2016. Erdogan answered that with heavy threats against the american government.

The climax of Uranus`square to Ankara will be effective from may 2018 until July 2020.

Let´s get back to the Coup d`Ètat in Turkey on 12 September 1980 when the turkish military served as a protector of the untity of the country by taking over power for a period of 3 years.

During the Coup d`Etat in Turkey Venus the planet of occupation of resources, wealth, territory and central markets at 5° Leo was conjunct the astrogeographical position of Ankara. This constellation describes very well a coup in favor of the stabilization of the current situation and from the center of society rather than one dedicated to overturning government institutions and economical basis of society. It therefore symbolyzes the strongly stabilizing and lasting effects of the changes brought about during the short period of military rule.

The Coup d`Etat of 15/16 July 2016 was apparently a fake organized to justify the final steps in the suppression and at least partial abolition of the democratic institutions and the independence of justice. In a stunning parallel to the September 1980 Coup Venus the planet of markets, income, food, possession of territory was again conjunct the 2!Leo resonance coordinate of Ankara pointing at a Coup organized from Ankara and in favor of the territorial and economical centralism and economical stability. This time Venus was accompanied by Mercury the planet of intelligence and indicator of cleverly planned action in favor of the central government.

Just like in the case of the 1980 Coup d`Etat these transits clearly show a coup carried out by the ruling groups in Ankara and in favor of the stability of the central government with the only difference that this time it was not the military that took over control to safeguard the democratic institutions and Kemalist political system but the central government itself that took over control over the military in oder to abolish the secular Kemalist republic and establish the full hegemony of the corrupt Erdogan clans.

The absence of of planetary transits of tension in relation to Ankara is a hint at the improbability of a Coup dedicated at the destabilization of the state or government. There is no trait for that and actually quite the opposite was the case: the position of the Moon moving in exact trine to the 2°Leo coordinate of Ankara an in Sagittarius the sign of expansion points at events well directed at the expansion of the current ruling government.

Jupiter at 19° Virgo was on the same zodiac degree as on the day of the previous Coup d`Etat in Turkey of 12 September 1980 as well as of the Reichstag Fire on 27 February 1933 in Berlin an almost archetypal example for how a fake assault was used for destroying democracy to create a bloody dictatorship.

The Reichstags Fire was an arson attack by the german Nazi Party on the german parliament building done to create an alibi for suspending civil rights and make way for Hitler`s fatal dictatorship over Germany.

The Nine Eleven attack on the WTC Twin Towers in New York which was used as an alibi for corrupting the democratic system in the USA, creating a line of wars, destabilizing a number of countries in the Middle East and Africa and creating free space and enough hate for founding large groups of terrorist organisations saw the Sun at 19° Virgo in the same position too..