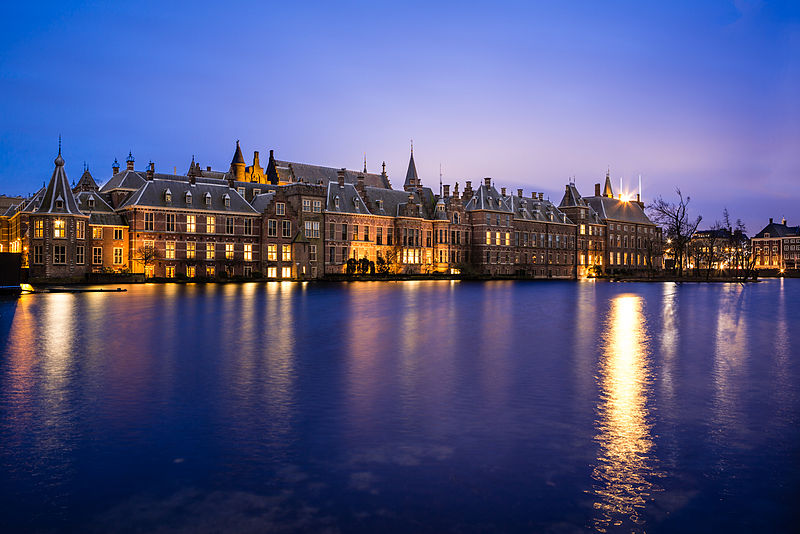 The astrogeographical position of The Hague and transits transits of the outer planets in relation to the capital and political center of the Netherlands. Mundane astrology, astrogeography and politics.

The astrogeographical position of The Hague

Astrogeographical resonance degrees of the seat of the Dutch government and parliament in The Hague/Den Haag for morphogenetic field level 1 which describes the international, supra-regional topics of the dutch government: one coordinate lies at 22° Pisces and 10°Libra. The positions for Amsterdam which functions as the  representative capital of the Netherlands are 29°Pisces and 3°Libra.

Future Transits of the outer planets in relation to The Hague

Neptune`s transit over the 22°Pisces astrogeographical position of The Hague in his own sign Pisces between May 2020 and March 2023 could indicate stabilizing effect for the dutch nation on a spiritual level but not necessarily for the land itself and for the political system. Of course Neptune is a clear factor that supports globalization, liberties and dissolution of hate and tension. It also stands for the reconnection with the country`s true identity. The sensitivity against the EU and all threats exerted by foreign politics are a natural topic of this transit. It`s most positive perspective could lie in the stimulation of a spiritual self-finding process which helps bring a reorientation in regard to the country`s true identity. Apart from that Neptune as the ruler of the ocean and an influence of stabilization may bring the intensification of the effects of global warming on the dutch flatlands. Neptune so indicates the need for intensification of efforts to protect the land from being swept away,  developing systems of floating houses and new technologies for  stabilization of the coasts. Neptune´s transits demand opening up to the importance of lastingness.

Pluto vs. Neptune:
How the dutch defense system of super-large storm surge barriers and dams built to control the threat of drowning was programmed in the Netherlands` birth charts:

And both the Dutch Republic (1579) as well as the Kingdom of the Netherlands (1811) were founded with Neptune the planetary ruler of the sea square to the astrogeographical resonance degree of dutch capitals The Hague/Amsterdam indicating that protection of territory through the super-large storm surge barriers and dam systems was programmed.

The Union of Utrecht is regarded as the foundation of the Dutch Republic or Republic of the Seven United Provinces. It was signed on 23 January 1579 unifying the northern provinces of the Netherlands, until then under the control of Habsburg Spain.

The Union of Utrecht was signed with Pluto the planet of transformation, self-defense and fortresses at 0°02 Aries conjunct the 29°Pisces astrogeographical resonance degree of the representative capital Amsterdam. 3 days before that Pluto had ingressed into Aries the sign of warfare, mobilization, ignition and new starts. Venus the planet of wealth, income, markets and possession of territories at 22°Pisces the sign of the sea was in exact trine to the 22°Scorpio resonance degree of The Hague. This transit position points at the wealth and expansion of dutch trade as the stimulative factor that brought dutch independence.

The pressure on the political status quo through the Union of Utrecht is best explained by the Neptune at 10° Cancer exactly square to the 10°Libra coordinate of The Hague. This position explains the dissolution (Neptune) of the status quo as an adaptation of the formal situation (Spanish possession of the Netherlands) to factual reality (rise of dutch trade, wealth and power). Such squares from the planetary ruler of the sea – the biggest threat to the Netherlands seem to be characteristic for the foundation charts in dutch history:

The birth or foundation chart for the Netherlands of 1815 with Sun, Mercury & Pluto over The Hague and Neptune square

The birth chart for the foundation of the country as a United Kingdom of the Netherlands during the Congress of Vienna saw Pluto at 22° Pisces exactly conjunct the position of the capital The Hague and in conjunction with Mercury at 23° and the Sun at 25° Pisces. Pluto`s role as the ruler of Scorpio explains the extremely alert, self-defensive motivation of Pluto in regard to the traumatic issues from the attacks of global players and neighbor countries. For the period of the Congress of Vienna this accounts particularly for Great Britain, Spain, Austria and France and in the first half of the 20th century for Germany.

Saturn on 8°50 Aquarius was in a progressive and harmonious trine to the astrogeographical position of The Hague at 10° Libra. The Moon position on 27° Taurus the degree of fulfillment of all topics Taurus the sign of agriculture and market places is symptomatic of the new state`s enormous potential for wealth and economical success.

The position of Neptune (the ocean, destabilization) at 20°Sagittarius occupying the square to Pluto (planet of defense) and the astrogeographical resonance degree of The Hague indicated the threat to the territorial stability of the country through the Belgian tendency for secession which was in fact realized as soon as 1830. Another important indication of the Neptune square has to be identified in the intense threat to the coastal country exerted by the ocean. Pluto – Neptune square here appears as an almost archetypal constellation for the high standards and technological superiority of the dutch science and faculty of building drainage systems and dams. Pluto appears as the indicator for containers, construction work, pipes and canal systems here.

For data on opinion polling for the Dutch general election see the wikipedia article.

The  2017 general elections on 15 March 2017 will be held a day before the 202nd birthday of the Kingdom of the Netherlands with Jupiter conjunct the Moon in Libra. The date close to the country`s birthday also means that the Sun-Chiron conjunction of the day will take place only 3° away from the exact conjunction with the astrogeographically resonating degree of The Hague of 22°Pisces. The support from the Sun for its natal position and for the astrogeographical position of the government is an indication that the elections have to deal with the topics of the country`s sovereignty, self-esteem and self-image.

The opening of the polling stations will take place wile Venus at 10° Aries and exactly opposite the 10°Libra astrogeographical position of The Hague will be conjunct the ascendant. This position of Venus represents an intense challenge for the current government.

As the ruler of houses 2 (economical concerns, possessing one`s own territory) and 7 (relationships and perception) this position of Venus has the following indication here::

The indicator for the globalized neo-fascist movements and the stimulus for the war and hate propaganda that is currently sweeping across the planet is Uranus who is transiting the degrees of Hitler`s inauguration in Germany in 1933. Compare: Political Development and Prediction through Uranus

But during the elections a Moon-Jupiter conjunction in Libra and in opposition to Uranus points at a strong movement against the instrumentalization of the Uranus topics for fascist populism at the same time. This is a clear hint that a major topic of this election is to recover the Uranus topics of self-liberation, emancipation and reconnection with the country`s fuller potentials from foreign rule. This of course applies to the Netherland`s independent stand against the neo-fascist american/russian/turkish/british populist propaganda just in the same way as against the European Union`s institutions.

Saturn the ruler of Mid-Heaven and indicator for the deciding factors of the election in Sagittarius and in house 9 stands for a certain paralysis and inability to bring further the progress and decisions needed to stimulate positive development. Predictions for the outcome of the elections that would use Saturn`s position have to consider that Jupiter the ruler of Sagittarius located in house 7 and conjunct the Moon strongly emphasizes the need to negotiate government decisions among coalitions of 3, 4 or more parties. Jupiter`s role indicates that this characteristic feature of the dutch political system will be of highest importance for the outcome of the elections. Radical perspectives are clearly weakened by this factor.

The astrological chart for the closing of the polling stations reveals the situation after the vote. Therefore it can be directly used as a chart for the outcome of the elections. Jupiter in Libra on the ascendant and in opposition to Uranus stands for negotiations about how to organize the self-defense of the country against all kinds of threats from abroad as represented by Uranus on the descendant ruled by Mars in Taurus. The attacks from the fascistoid turkish propaganda war which is part of the coming turkish constitutional referendum on 16 April that came only 5 days before the date of the elections are the clearest symptom of this situation as reflected in the chart. Since the danger of manipulations of the coming elections in EU founding members Netherlands, France and Germany in 2017 had been widely discussed since the Brexit decision – the attack from the turkish side appears as a move in a larger strategy of the neo-fascist global players to provoke a splitting of the European Union.

The position of the Moon on 2° in highly defensive water sign Scorpio in highly alert house 1 and exactly opposite Mars strongly emphasizes the intense emotionality triggered and the acute threat exerted on the country by the global neo-fascist movement. As far as interior politics are concerned this position stands for the transformation of belief systems in relation to the country`s and society`s self-image (house 1).

The confrontation of the open-mindedness of Jupiter in Libra with the need for action for self-defense as indicated by the Moon in Scorpio clearly indicates the practical need for the transformation of the traditional ideal of an open multicultural society into a merely practical and comparatively disillusioned outlook.

One thought on “The astrogeographical position of The Hague”