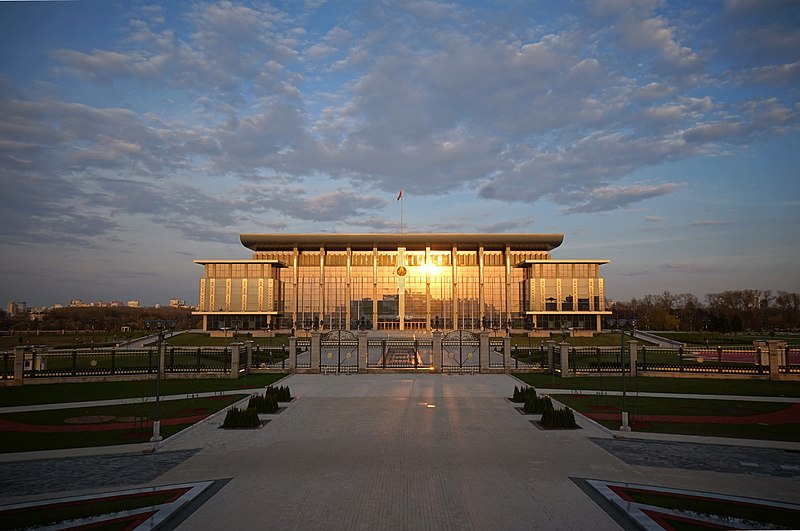 Political Astrology of Minsk and Belarus. The astrogeographical position of Minsk and the historical charts of Belarus.

Political Astrology of Minsk and Belarus

Astrogeographical position of the City of Minsk for morphogenetic field level 1 which describes the international, supra-regional resonance of the capital of Belarus concerning its government, politics and the center of the national morphic field (nation): Minsk has one coordinate at 27°Leo the sign of centralism and major indicator for centralist rule and the 2nd coordinate at 1° Capricorn the sign of governments, Both resonance coordinates are particularly important resonators for centralist governments, kingdom, absolutism, autocracy and centralization of politics. The strong and direct parallel of the 27°Leo resonance coordinate of Minsk with exactly the same position of Washington could explain the intense threat felt by Moscow of a closer relationship of Minsk with Russias strongest geo-political opponent and enemy.

Another important historical capital for Belarus is the Lithuanian capital of Vilnius (Wilna) located some 160 km north-west of Minsk at 4°Sagittarius and 7°Leo. The long-time central capital Moscow is located at 2°Taurus and 12°Cancer.

Birth and Foundation Charts of Belarus

Foundation of the Belarusian People’s Republic in 1918

The Retreat of the German armies at the end of World War I allowed the Bolshevist Russian armies to re-enter into Belarus. As a result Belorussian forces constitute the Socialist Soviet Republic of Byelorussia on January 1 1919. This western winter offensive was not limited to Belarus as Soviet forces similarly moved into Lithuania to proclaim the Lithuanian Socialist Soviet Republic (LSSR) in Vilnius. These operations brought the Soviets into confrontation with the newly formed 2nd Polish Republic and the remains of German forces in East Prussia. By August 8 1919 Polish forces occupied Minsk. It took the Bolshevist forces over a year to reconquer Minsk in July 1920.

The process that led to the factual independence of Belarus on August 25, 1991 was started by the Declaration of State Sovereignty of the Byelorussian Soviet Socialist Republic passed by the Supreme Soviet of Belarus on July 27, 1990.

The Russian Annexation of Belarus in 1793 with Uranus conjunct, Pluto opposite and Jupiter square to Minsk

The Russian Annexation of the territories of modern Belarus was a result of the 3 Partitions of Poland which ended the existence of the Polish–Lithuanian Commonwealth between 1772 and 1795. It occurred in the aftermath of the Polish–Russian War of 1792 and was approved by its territorial beneficiaries, the Russian Empire, the Kingdom of Prussia and the House of Habsburg.

The Battle of Białystok–Minsk began with the Nazi German attack on Soviet Russia on June 22 1941 and ended on July 9 1941.

Alexander Lukashenko as the personification of Pluto over Minsk

Lukashenko supported the 1991 Soviet coup d’état attempt directed against Russian president Mikhail Gorbachev and against the dissolution of the USSR. Though opposed to the independence of Belarus from the USSR and from Russia Alexander Lukashenko has personally dominated Belarus as its first President ever since the creation of the office on 20 July 1994. This explains his role as a supporter of Russian political control over Belarus.

Though explicitely opposed to the independence of Belarus from the USSR and from Russia Alexander Lukashenko has personally dominated Belarus as its first President ever since the creation of the office on 20 July 1994.

The first Lukashenko Presidency with Pluto square to Minsk

The first Presidential elections in Belarus held on 23 June 1994 with a second round on 10 July 1994 are widely considered as the only free elections ever held in Belarus until today. Lukashenko received 80.6% of the vote in the second round.

Astrogeographical Transits for Belarus in the 21 century

The 2020–2021 Belarusian protests are ongoing political demonstrations and protests against the government and presidency of Alexander Lukashenko who has served as president of Belarus ever since the first establishment of the office in 1994. The movement represents the largest anti-governmental protests in the short history of independence of Belarus. The demonstrations began in the lead-up to the 2020 presidential election in which Lukashenko sought his sixth term in office.