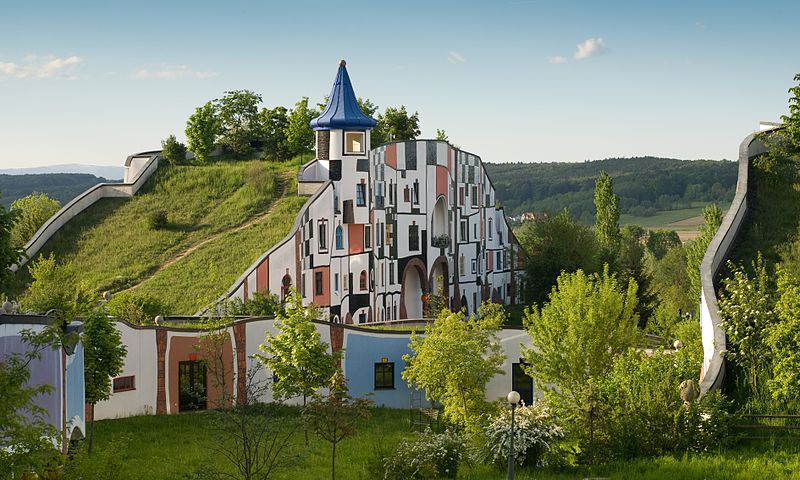 Astrology & Architecture articles: The astrogeography of Wellness Resorts, Spas. Yoga, Meditation and Healing Centers, Shaft, bow and balls in Sagittarius, Gaudi`s Sagrada Familia in astrogeography, Shapes of Scorpio, Steiner`s Goetheanum,  Scorpio as the sign of sculpting,  The Lucky Coin Structure in Sagittarius,  Art Nouveau in Sagittarius and Cancer, Cincinatti Union Station as a perfect example for Sagittarius with Libra, The Egg on top of Dali´s House – Shapes of Cancer, Cancer as the Sign of Seashells in Architecture, The Hagia Sophia as a Temple of the Earth Mother, Box-like forms in Virgo, Max Ernst`s sculpture Capricorn.

The Hundertwasser architecture in astrology

Friedensreich (peace-rich) Hundertwasser (100-waters) Regentag (rainy-Day) Dunkelbunt (dark-colorful) is the artistic name of Austrian artist Friedrich Stowasser. Hundertwasser is best known for his visionary approach to architectural design as explained in his “Mouldiness Manifesto against Rationalism in Architecture”. Heres a link list to “Hundertwasser – Houses”.

Hundertwasser stood out as an opponent of “a straight line” and of the ruling habitual standardization of design during his life-times. That does of course not mean that his vision of building design has not developed its own standard. Whether or not or in how far the Hundertwasser design concepts can be understood as influenced by the Antoni Gaudi architecture or the Rudolf Steiner related ideals may be examined.

The Hundertwasser House in Vienna

The famous and important Hundertwasser House in Vienna was built as the first of his design projects between 16 August 1983 and 17 February 1986. Its importance lay in the design concept that intended to create a more sane, healthy, protected and inspiring atmosphere through attempting to overcome the deficiencies and mistakes of industrialized house construction in the 19th and 20th centuries.

Hundertwasser`s demand for planting trees on top of the houses was ground-breaking for the introduction of new regulating laws for urban architecture in Austria and Germany. By 2020 it has become clear that plants on roof tops will take over a more and more important role in the architecture of the 21st century.

Astrogeographical position for morphogenetic field level 3 (surrounding area) of the Hundertwasser house in Vienna which describes how the building and surrounding streets are embedded in the townscape of Vienna: the area has one coordinate in dynamical fire sign Sagittarius the sign of style, design, fashion, composition, thinking, watching, observing, philosophy, arches, bows and arrows, time measurement and awareness of cyclic processes, shamanism, healing, preaching, hunting, aiming and success orientation. It is important here that Sagittarius reflected the position of the intense Sun-Mercury-Saturn conjunction in Hundertwassers birth chart.

Waldspirale (meaning forest spiral) is a residential building complex in Darmstadt, Germany, that was designed by Austrian artist Friedensreich Hundertwasser. The U- or horseshoe-shaped building has a unique facade which does not follow a regular grid organization and windows whose shape and placement appears to disobey and/or contradict the habitual patterns of a regular, symmetrical, square order. It was built between 1998 and 2000.

Astrogeographical position for morphogenetic field level 3 (surrounding area) which describes how the whole of the appr. 100 m long building and surrounding buildings are embedded in the landscape: the construction site has one coordinate in solid, fixed, female earth sign Taurus the sign of the earth and earth mother, grounding, growing roots, nest-building, architecture, settling down, occupation and possession of territory, markets and local energetical centers. The round shape of the building and the onion tower domes should be examined in regard to the resonance of earth sign in Taurus. One of the most important examples for this preference of Taurus from the history of architecture is the “mother of all domes” building the Hagia Sofia in Istanbul.

The 2nd coordinate is in service orientated air sign Libra the sign of harmony, balance, beauty, decoration, naive painting, love, relationship and openness. Libra stands for the reflexes aimed at the decoration and beautification of the building.

The round forms and onion domes cannot be related to Libra which has a clear tendency for rectangular and comparatively strict symmetrical alignment. Compare my long list of examples for these reflexes in Libra. This means that the Libra resonance of the site appears to be overwritten by the tendency for the preference of less filigree less airy and more compact, stout and earthy round forms in Taurus.

The Hundertwasser designed house in the Gruga Park in Essen, Germany was built in 2005 as one of the last Hundertwasser design concepts that was realized. It is run by the German branch of the MacDonald Children Charities, The facades of warm colors and the playful towers seem to suggest the association of a fairy tale playground castle.

Astrogeographical position for morphogenetic field level 3 (surrounding area) which describes how the whole of the appr. 45 m diameter building and surrounding buildings are embedded in the landscape: one coordinate is in emotional water sign Cancer the sign of emotional identity and individuality, motherhood, fertility, pregnancy, the uterus, eggs, sea-shells, childhood, families, islands, feeling at home and indicator for the round shape of the building that allow the creation of a protected island inside the inner circle of the structure.

The “Rogner Thermal Baths” at Bad Blumau is one of the most famous of thermal baths and holiday resorts in the Thermal and Volcanic Lands of Styria in south-eastern Austria. The 100°Celsius healing waters are pumped up from volcanic sources 3000 m below the ground.

The overall design concept was created by Friedensreich Hundertwasser starting from 15 January 1992. It is based on organic architecture with grass roofs and trees on top, colorful facades, fairy tale towers relating to medieval castles with the typically Austrian-Bavarian-Russian type of onion dome and minaret tops, widespread basins, 330 columns in different colors and 2400 windows of which not two are identical. The hotel has its own geothermal power plant.

Astrogeograohical position of the town of Bad Blumau for morphogenetic field level 1 (region, global resonance) which explains the global level of resonance of things that happen here: Bad Blumau has one coordinate at 9°Aquarius and one at 13°Leo.

Astrogeographical position of the Thermal Baths and Resort

Astrogeographical position for morphogenetic field level 3 (surrounding area) which describes how the whole of the 360 m long and equally wide park area are embedded in the landscape: the site has one coordinate in solid, fixed water sign Scorpio the sign of the fire of water, alchemy of the mixing of elements, tanks, basins, water pipes, magma chambers, volcanic activity, the underworld, underground culture, sculpting, imaging and art production as such. The affinity of Scorpio with the underworld, closed containers, strongholds and underground culture relates the image of the underground houses to fortresses and bunkers. An element that relates to Scorpios appeal for a dominant ideal, concept or dogma may be studied here in regard to the appeal for the constancy of the exceptional features of the design concept.

The 2nd coordinate is in fire sign Aries sign of action, speed, motivation for new projects and beginnings, warfare, fighting, mobilization, muscular training and sports and competition for survival. Aries is to be investigated here as resonating sign of the dedication to physiotherapy and cures of the muscles. The stimulus through Aries can be particularly helpful after accidents or in case of rheumatic diseases. As the resonating sign of the first and initializing organ (Ascendant and House 1) fire sign Aries stands for the “Reset Function” of the physical system of living beings. As a representative of the fire element Aries can be expected to have a strong affinity to the volcanic activity below the ground.