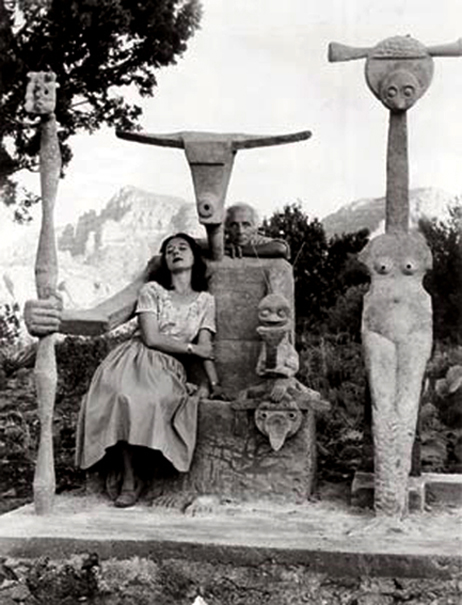 Max Ernst`s sculpture Capricorn. Astrology, astrogeography and art: Max Ernst in Sedona, Arizona and the creation of the sculpture at the end of a road to self-finding

Related articles: The Sedona Vortex System in astrogeography, Scorpio as the sign of sculpting, Checkerboard Mesa in Scorpio with Gemini, Bernini and the Rape of Proserpina,

Max Ernst`s sculpture Capricorn was created in 1948 during the artist`s and his wife the wonderful Dorothea Tanning`s time in the magical rocky landscapes of Sedona, Arizona,

It can be interpreted as a depiction, study and caricature of the habitual reflexes of perception under which the framework of gender related patterns, role conduct and hierarchy between man and wife function. There are allusions to various symbolisms and elements of form of different origin integrated in the sculpture. Among it allusions to the Hopi Kachina figurines, Venus of Willendorf figurine, the spanisch “Toro” motif and others.

Max Ernst was born on April, 4 1891 with Sun in Aries, Ascendant in Capricorn`s anti-dote Cancer and the Moon at 14° Capricorn just below the horizon or descendant in the constellation of the lost (sunken) home and emotional identity. That Moon position may be seen as an indication of his natural interest in reflecting the subconscious through methods of surrealism in art as the event horizon of perception appears naturally projected onto a descending stage (descendant) where the glowing of the light from emotions attached to reflecting (moon) and digesting (house 6) impressions and experiences (house 7) that have just vanished from visibility (from house 7) a moment ago.

Saturn the sign ruler of Capricorn was at 12° Virgo in a friendly, supportive aspect demanding and/or supporting the Moon`s integrity in a constellation of emotional emancipation, separation and cutting umbilical cords from foreign rule over intellectuality, intelligence, learned education, apparent cleverness and the assumption of reasonable calculation of materialistic advantages (Virgo) determined by fears of individuation at the end of house 3.

The differentiation between the two halves of the sculpture describes the male-gender-role half in the form of a right arm and hand holding a large wand in what must be a tribal chief and patriarchal dominator`s (Capricorn descendant) super-fist and the outsourced inner child (Cancer ascendant) making his left hand. The child being part of the male manual activity either partly serves as a means of self-expression or caricatures the appeal for going without a mother for his kids. Astrologically this can be directly explained as a – conscious or not – confrontation of the antagonisms between the Cancer ascendant ruled by the Capricorn descendant moon position in the artists natal chart. The round and open mouth seems ready for consuming by serving as a plug-in for sensual pleasures or else stands for being absorbed in loudness. That may even have lead to the lack of a mouth on the female counterpart as no space for self-expression and even for sensual desires of her own is left to her in the alchemy of their conversation. The polarity created through that must have led to the wife being absorbed in visual perception, impressionism and sensitivity.

The depiction of the wife sees it escaping into a long slim female identity depicted as a standing and necessarily less grounded being with small iconicized hermaphroditic breasts crowned with marked nipples made to attract lovers not babies in the first place. This reduction of female hormons, breast and attributes of motherhood suggests giving up motherhood to the left hand child birth of the patriarch. Possibly in a simultaneous attempt to overshadow and/or get out of the way of the narrowness of the broad ass foundation (Mars in Taurus) of the spouse. The proportions reflect the fact that Dorothea was taller than Ernst.

The female being is depicted with vivid human eyes apparently reflecting herself while glancing at the usurper whose eyes are covered by a robotic rectangular plank or “Brett vor dem Kopf” (board before the head) as such a thing is called in German language, although with a potential appeal to relying on the combined vision of the right and left eyes in a more broad third eye construct.

Altogether the potential sensitivity of the female counterpart appears to be somewhat nailed to a totem pole though not without what either seems an emblematic trophy in the form of thigh bones from her former lovers serving as hair pins or else is designed as prolongated ear trumpets.

The sculpture seems to reflect an experience of redemption in Max Ernst`s life after a phase in which his Cancer ascendant may have gone through an experience of redemption from his own past and the anyway destroyed European homelands under the impression of a self-reliant and self-fulfilling life in simplicity without electricity and running water and under the spiritual impact of his contacts with Hopi shamans and the magical hardware (Capricorn) of the Arizonian dry and rocky mountains (Capricorn). His Sedona experience seems to have allowed a pacification, self-healing (house 6) and birth by cutting the umbilical chords (Saturn) from the inheritance symbolized by his own Moon position in Capricorn.

In the trailer to Peter Schamoni´s wonderful film about Ernst`s life Max says “…. so again I had to flee westwards – always westwards – only in the West could I find something new”. These words reflect the Moon position in Capricorn at the western end (descendant) of his birth chart and never to be found as below the horizon and driven, stimulated and tempted by the exact trine aspect from Mars at 16° Taurus the sign of the earth, grounding, roots and of income of course in house 11 the house of fleeing, flying, seeking liberation and self- finding.

In the story told at 1:35 in the trailer to the film in which Ernst describes how the omen of a rattle snake (Pluto) by the side of the road revealed to him that he had finally found the end of his road the snake relates to Pluto at the very end of house 11 in his natal chart and conjunct Rahu – the North Node of the Moon as the indicator of the final aim of an individual`s karmic journey in life and conjunct also Neptune the planetary indicator for the true spiritual identity and certainly also for the mystification of the story told.

Sedona in Cancer plus Taurus

According to my astrological worldmap calculation the resonance coordinates for the town area of larger Sedona and for morphic field level 2 (city) are located in the combination of water sign Cancer with earth sign Taurus.

It can therefore be concluded that Sedona stimulated house 1 (individual personality) and house 11 (self-finding) in Max Ernst`s birth chart and life explaining his individual experience in the area as process of mutation, self-liberation and attempting to create a new world and reality of his own independent will and decisions.

The resonance with natal Mars in Taurus in house 11 is also strongly reflected in the realization of the project of building house and world of his own here.