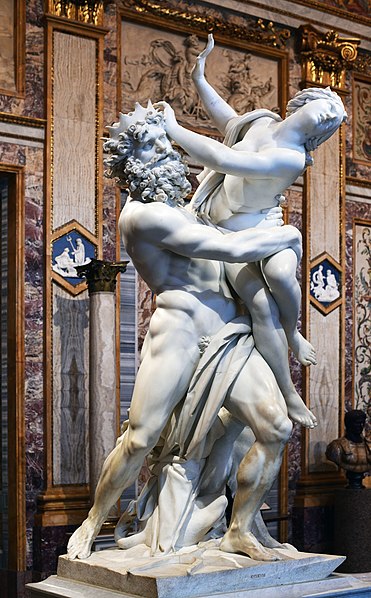 Gian Lorenzo Bernini and the Rape of Proserpina. Astrology, art and sculpting in astrologcial psychology. Bernini´s birth chart compared to his sculpture

The Rape of Proserpina is a large Baroque marble sculpture by Italian scupltor Gian Lorenzo Bernini created in the years 1621 and 1622. Bernini was only twenty-three years old at its completion. It depicts the Abduction of the goddess Proserpina (Persephone) which is seized and taken to the underworld by the god Pluto (Hades) the god of the underworld.

Gian Lorenzo Bernini was born with a grand trine in the three fire signs each consisting of two or more planets in conjuncion. In Bernini´s birth chart Pluto the depicted rapist is located in dynamic, phallic, male fire sign Aries the sign of action, ignition, speed, fighting and male energy indicating the strife for a self image of male dominance.

Gian Lorenzo Bernini was born on 7 December 1598. during a Pluto – Uranus conjunction (castration, violation, sadism/masochism) in Aries the sign of erection which was placed in exact trine with a Sun – Mars conjunction (constellation of unfullfilled and unexpressed sexuality) in Sagittarius the sign of hunting..The grand fire trine (fulfillment of action) in Bernini´s birth chart was completed by a Moon-Neptune conjunction (constellation of sexual submission and erotical dreams) in Leo the sign of sexual self-expression and self esteem. Neptune the planet of the unconscious ture identity was overshadowed through a conjunction by the neglected black moon Lilth representing the hidden traumatic part of the unconscious. This overall constellation can be evaluated to include nearly all the systemically relevant planetary factors that could describe the intensity of sexual desire and stimulation through the imagination (projection) of the forbidden and unreachable, of abduction and raping and the mechanisms of sadism, masochism, trauma and pain.

Detail from the Rape of Proserpina sculpture depicting the intensity of sexual desire for the female flesh and the sexual aggression and violence. The describes astrological constellation seem to really qualify Bernini for depiciting the emotionality projected onto the topic of the mythological raping of the goddess Proserpina in such a way that it is transferred into the spheres of human behaviour and psychology.

The Rape of the Proserpina sculpture along with other important and fascinating works of  Bernini can be found at Galleria Borghese in Rome.

The Galleria Borghese is an art gallery in Rome, Italy, housed in the former Villa Borghese Pinciana surrounded by its famous gardens. The Galleria Borghese houses a substantial part of the Borghese collection of paintings,  sculpture and antiquities, begun by Cardinal Scipione Borghese, the nephew of Pope Paul V (reign 1605–1621). The Villa was built by the architect Flaminio Ponzio, developing sketches by Scipione Borghese himself, who used it as a villa suburbana, a country villa at the edge of Rome.

Astrogeographic position of Galleria Borghese for morphogenetic field level 4 which describes the atmosphere and energetical topics of the building itself:  the south west part of the west wing and also the south facade of Galleria Borghese are located in aristocratic air sign Libra sign of harmony, balance, beauty, relationship, love, justice and symmetry. The north east part of the building lies in solid, fixed water sign Scorpio sign of sculpting, photography, copying, imaging, mentally stimulated passion and of visualization. The 2nd coordinate lies in self-protective earth sign Virgo sign of reason, conservation and storing goods.

On Bernini´s Ecstasy of St. Teresa

We should of course not limit Pluto`s role to working out the details of the depicted motif. That part of the creative process has to be investigated as a coproduction of Pluto at least with Jupiter (composition, caricature, understanding of single features as part of the whole image) and definitely Venus (presentation) for the level of the artists mental reflection when creating his masterpiece.  And also of course through interpretation of Saturn (rules followed).  Pluto`s  position also stands for the limitations of the artist`s perception through trauma.

And what I`m suggesting here is to examine the Pluto-Uranus conjunction as a symptom of the artist`s individal psychological topics as well as those of his time – an era in which the Pluto-Uranus conjunction in Aries deeply questioned male sexuality and role behaviour. That is the point. in the Rape of Proserpina I want to make clearer here..And to some extent I think that reonates in the “Ecstasy of Saint Teresa” too who is known to have been tortured and raped by cardinals. Her quest to offer her body (breasts) to Jesus for example has to be evaluated in relation to the Pluto-Uranus topics here too. And yes in astrology we have to apply interpretations of the birth chart to every single peace of an artist`s work. And yes it is correct that in astrological psychology (like in every other field of astrology) we have to recapitulate that interpretation is speculative.. What I was trying to imagine in this article was what Bernini may have gone through when creating this sculpture and as a young man of 23. I´m really fascinated by the way an artist`s early masterpiece can often reflect some of the most personal topics – and also those of the psychology of the era that she/he breathed.