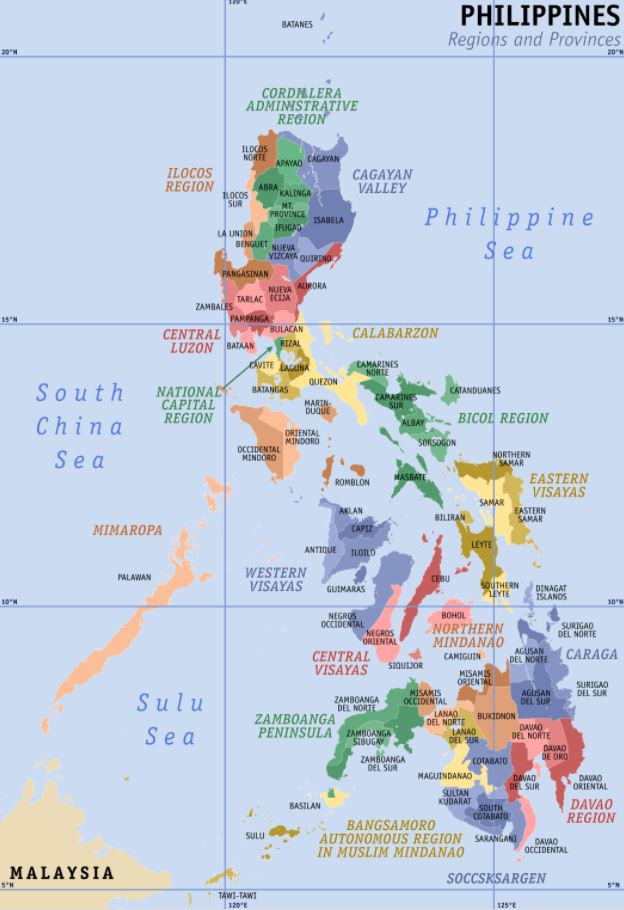 Manila and the Philippines in astrology

The Philippines consist of about 7,640 islands, that are broadly categorized under three main geographical divisions from north to south: Luzon (north), Visayas (central), and Mindanao (south).

The Metropolitan region of Manila in the 45 km wide Manila Bay is an ideal site for a large harbor. The City is located on a a narrow isthmus (11 km wide) between Manila Bay and the backwaters of Laguna de Bay which is not connected to the sea. The position on a long and narrow isthmus is symptomatic of the astrogeographical position in the combination of Aquarius with Aries. License: GNU-FDL.

Astrogeographical resonance coordinates for the City of Manila for morphogenetic field level 1 which define the supraregional, international situation and role of the capital and government of the Philippines: Manila is located at 12° in creative, innovative air sign Aquarius the sign of the sky, heaven, paradise, innovation, emancipation, revolution, contrasts and at 11° in highly dynamic fire sign Aries the sign of action, speed, warfare, fighting and mobilization.

History and Foundation charts for the Philippines

Like many other nations the Philippines were first factually united under foreign colonial control. This means that the nations as such did not exist before their colonial history.

But in astrological geography I suggest to examine in how far and in what way the morphic surface fields of territories united under the control of single governments – colonial or autonomous – existed before the foundation of the nation.

The Process of the Foundation of Manila

The City of Tondo first mentioned in the Copperplate Inscription from the year 900 CE was an important capital on the territory of the modern Manila Metropolitan region long before Manila was founded. Tondo was the capital of the Kingdom of Tondo.

In regard to the assumed year of the establishment of Maynila as a Muslim principality by Rajah Ahmad Rajah or Sultan Bolkiah in or around the year 1500 AD the astrogeographical transits of the year 1496 can serve as am overwhelmingly strong explanation for the process that led to the changes in the Maynila area.

After reaching the harbor of Manila by 8 May 1570 the Spanish expedition conquered and destroyed the Kingdom of Maynila founded by invaders from Brunei in 1500. They burnt down the existing Muslim fortress and city on 6 June 1570 and re-built a Spanish style fortress.

The foundation of the Spanish Philippines in 1571

The geo-strategical conflicts between the fast expanding USA and the declining Spanish Empire led to the Spanish–American War between April 21 – August 13, 1898. The start of the Philippine Revolution is usually seen as on 23 August 1896 when Spanish authorities discovered the secret anti-colonial Katipunan organization.

The Battle of Manila Bay on 1 May 1898 in which the American Asiatic Squadron destroyed the Spanish Pacific Squadron effectively seizing control of Manila was the first major incident in the Spanish-American War. On 12 June Baldomero Aguinaldo of the revolutionary, anti-colonial Katipunan issued a Philippine Declaration of Independence which was neither recognized by Spain nor by the USA.

The Treaty of Paris signed on 10 December 1898 ended the Spanish Colonial possession of the Philippines. That did not bring independence as the Philippines were passed over to the United States who regarded it as part of their geo-strategical sphere of interest.

Philippine Independence of 1946 with Pluto and Neptune opposite Manila

The Hare–Hawes–Cutting Act of 1933 and the Tydings–McDuffie Act of 1934 decided the road map to the Independence of the Philippines from the USA.. The elections for the Philippine Constitutional Convention were held on July 10, 1934 and the 1935 Constitution worked out.

Later that the day the Treaty of Manila was signed.