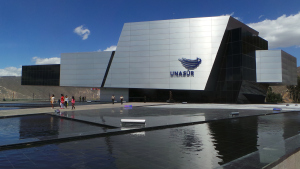 UNASUR – Union of South American Nations in astrogeography. Political astrology and astrogeography of the south-american self help organisation

The Union of South American Nations is the South American intergovernmental   self-help organization of 12 South American countries dedicated at political and economic cooperation and at emancipation and self-defense from the global capitalist players mainly the USA. which has been dominating and manipulating South America for the last 80 years. UNASUR includes Argentina, Bolivia, Brazil, Chile, Columbia, Ecuador, Guayana, Paraguay, Peru, Surinam, Uruguay, Venezuela.

Astrogeographical Indicating degrees for UNASUR and important past and future transits

On 11 March 2011 the day that the UNASUR Constitutive Treaty entered into force Uranus was in exact conjunction with the astrogeographical position at 0°Aries (see chart below). Uranus was just about to make his final ingress into Aries that started the new 84 years cycle. That coincidence is a really powerful demonstration of the strong resonance between the astrogeographical position and the planetary transits. In regard of future transits of Uranus this indicate that the profitability of UNASUR will be activated as soon as Uranus will make the next step in his 84 year cycle by moving into Taurus the sign of profits on 15 May 2018, 10:24 Ecuador Time (ECT).

Saturn´s ingress into Capricorn and across the square position to the UNASUR headquarters from 20 December 2017 stands for intense pressure on the organisation from abroad, revision of corruption and the need to achieve more independence of South America from the global economical players.

Neptune over 19°Pisces and in exact square transit in relation to UNASUR indicates the weakest and most challenging period that the organisation has gone through so far. That period will last from February 2020 and February 2022. The period stands for depression and a self-cleaning process of the organisation.

As is also the case with capitals of the founding members of the EU the astrogeographical positions of the governments of several UNASUR Member States are located in a Grand Cross which in the case of South America is located between 17° and 20° of the cardinal signs. These capitals are Buenos Aires & Montevideo at 20°Cancer, Caracas on 17° Cancer, Lima on 19° Capricorn, Brasilia on 19° Aries and Georgetown on 17° Libra.

The Grand Cross between the member states is a sign that the full circle of contradictory points of views is included in the South American self-help organisation. The parallel with the Grand Cross of the EU governments (Rome 29°GEM, Paris 27°SAG, Amsterdam 29°PIS, Berlin, 29°VIR) is a clear indication that such controversial aspects are simply natural and even needed to include the full circle of options in such gatherings of countries.

The signing of the treaty that marked the foundation of UNASUR Venus the ruler of earth sign Taurus the sign of the earth, grounding, food, agriculture, material autonomy, wealth, growing roots and possessing territory was on the economically extremely auspicious, profitable and grounding and highly profitable degree of 28° Taurus in her own sign apparently trying to pave it`s way away from the square position with the Neptune, North Node, Chiron conjunction in Aquarius. As the faster moving Venus had already passed the exact square position between 21° and 24° Aquarius it can be assumed that UNASUR ,as all options to help in grounding economical progress for the whole continent.

A second really impressive major planetary aspect of the signing chart was the trine of Saturn at 2° in earth sign Virgo the sign of reason, optimal use of resources, saving money, functionality, health, herbal medicine, lastingness, ecology, protection of nature, employed labor and slavery.with Pluto at 0° in earth sign Capricorn the sign of control over government control, efiiciency, rules and regulations, function checks, exorcism and supervision of laws. As both planets were moving at the very beginning of the signs the event represented the beginning of a new era for the political stability, cooperation of the South American Countries especially of course in regard to their emancipation from their greatest problem the USA – the dominator of all the Americas – and to some extent also the former colonial powers Spain, Portugal, Britain, Netherlands and France.

The Constitutive Treaty entered into force on 11 March 2011, UNASUR became a legal entity during a meeting of the Foreign Ministers of the UNASUR countries in Mitad del Mundo, Ecuador, where they laid the foundation stone for the Secretariat Headquarters on the same day.

On the day of the laying of the foundation stone for the UNASUR headquarters  near the Mitad del Mundo monument near the Ecuadorian capital of Quito Uranus started a new 84 year cycle moving over 0° Aries and exactly conjunct the supra-regional position of the building. The resonance with the constellations of the day of the signing of the treaty on 23 May 2008 may not be found to have been really perfect except for the Moon which was exactly on the economically extremely auspicious Venus position at  29° Taurus – a clear indication of high profitability and because of Taurus impact as the sign of possession of territory a clear indication for a step ahead in the effective liberation from the manipulation, interference and economical and political pressure exerted by the USA.

The astrogeographic position and design of the UNASUR headquarters

The new Headquarter of UNASUR designed by Diego Guayasamin constructed in 2014 is located near the equator at Mitad del Mundo monument north of Quito, Ecuador. Just like the highly useful astrogeographical position of the European Commission Building in Brussels the position of the UNASUR Headquarters can be assumed to provide exact data for interpretation and prognosis for all things that have to deal with the organisation.

Astrogeographic position of the UNASUR headquarters for morphogenetic field level 3 which describes the atmosphere of the construction site, topics of architectural design, function of the building itself and the energetical situation of the headquarter office:  located in self-protective earth sign Virgo sign of reason, optimal use of resources, saving money, functionality, health, lastingness, ecology, protection of nature, employed labor, slavery. The 2nd coordinate lies in highly alert dynamic, male fire sign Aries sign of action, warfare, new beginnings, Especially Aries but also Virgo stands for the sharp edges and cold impact of the design. Aries is the indicator for the commando bridge like structure that stands out from the building.