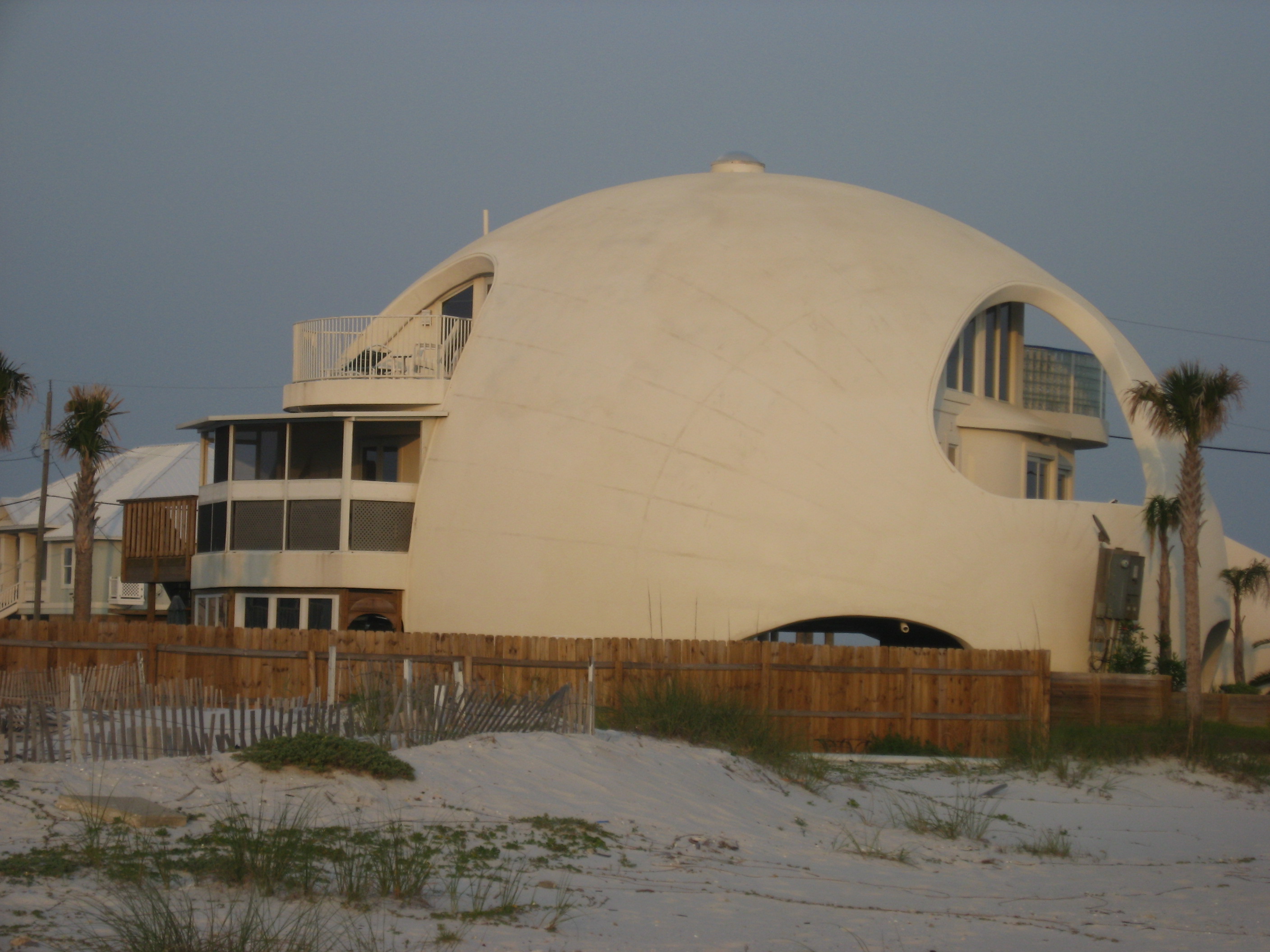 Some thoughts on an astrogeographical typology of monolithic domes. A study on the different aspects of domes and which atmosphere and function of such buildings is supported by the position in different zodiac signs.

A positive understanding of the wording of “Monolithic Domes”  could understand this branding as a wordplay with the dome shaped houses in megalithic aka prehistorical architecture and the aim to construct buildings in such a way that they grow from out of the ground where they stand as singular – shaped formations. The term “monolithic” relates to the male signs esp.  Aries the sign of unicellular organisms and the first occurrence of single identities. Domes on the other hand – because they are round are to be treated as female elements of form.

Aspects of “monolithic domes” are:   homogeneous structures, unicellullar beings, crab-shells, bunkers, hide-aways, containers, abstract solutions, space-stations, earth dwellings, zulu-huts, igloos, bush-houses and much more. Their astrogeographic position explains which aspect and function is supported by the energetical impact and atmosphere of the construction site on which they are placed.

Related articles:  Aries as the Sign of Unicellular Structures: Astrodome & Co,  Astrology and Architecture: Shapes of Scorpio,  Cancer as the Sign of Seashells in architecture, Pisces and Scorpio – Rudolf Steiner`s Goetheanum,

I was asked a question; which astrological signs relates to the monolithic domes patented by David B. South? This article gives a summary or astrogeographical perspectives on that question from my astrogeographical field studies.

Before we get to the astrological typology of the monolithic dome lets have a look at the site of David South´s company at: 177 Dome Park Place, Italy, Texas 76651.

Astrogeographic position of David B. South´s monolithic dome company in Italy, Texas for morphogenetic field level 3 which describes the atmosphere and energetical topics of the company itself: the company`s grounds have both astrogeographical coordinates in creative, innovative, futuristic earth sign Aquarius the sign of the sky, space ships, inventions, visionaries, abstraction, alternative thinking, reconnection with the fuller potentials and indicator for a holistic approach to technology.

That position perfectly describes the directions of innovation behind the monolithic dome concept. But as the sign of skyscrapers and of open-air structures Aquarius does not relate to the ideal of closed-up, protective container type of dome nor the clinging to the ground of monolithic buildings. In the polarity between the domes of Romanic architecture and the tall gothic churches that reach for the sky Aquarius relates to the latter kind of architecture. For more information on the contrast between Aquarius and the reflexes of the signs that are most strongly related to domes (Cancer, Taurus, Scorpio) compare my articles  on Amarna (Akhetaten),Chartres Cathedral and the Leaning Tower of Pisa

A  Domes in architecture – examples from astrogeographical field study

A 1   Taurus:  domes rising above places

Taurus has a strong resonance with domes. This can be frequently observed  in astrogeographical field study. Taurus is the sign of the earth and of the ground itself and grounding and growing roots are its natural aims. Whether we talk about plants or people Taurus  indicates expansion from the ground where the roots and foundation is laid to the surrounding areas. Similar as in Sagittarius staying too close to the ground is not the actual limit and fulfilment of  Taurus`  dreams.

Taurus relates to the dome while Virgo the sign of precautions stands for the purpose of using intelligent technology for self-protection.

Cancer is the sign of motherhood, pregnancy, the uterus, shells, the moon, feeling at home and aspects that concentrate attention onto the inside of a building. Major historical examples for domes located in Cancer are the Pantheon in Rome (Cancer-Sagittarius) and Hagia Sofia in Istanbul (Cancer-Taurus)  as the “mother buildings”  of all larger domes. Compare:  Cancer as the Sign of Seashells in architecture,

The National School of Arts in Havanna shows a group of smaller dome buildings located in Cancer.

The cave liike mound housing of the Hobbiton village in Matamata, NZ is an example for a megadome under Cancer`s tendency to feel at home and live inside of such sheltered places.  The combination with earth sign Virgo the sign of self-protection, ecology and optimal use of the ressources provided by construction site supports the association of an understanding of housing as a situation of being and feeling embedded in the landscape.

Scorpio is also a top level astrogeographical resonator of domes  not the first sign when it comes to domes Scorpio´s architecture has a defensive tendency  which is expresses itself in attempts to create homogenuous strucutures. Domes in Scorpio resemble helmets, bunkers and structures built as closed-up containers. Compare my article Shapes of Scorpio,

The Dome (Scorpio) and Tower (Aquarius) Ensemble of Oscar Niemeyer International Cultural Centre (opened 2011) provides a fascinating example for the polarity of Scorpio with Aquarius.

Built around 1250 BC it´s 14,5 diameter dome is assumed to have represented the largest dome on the planet for over a 1000 years. Scorpio stands for the acievements of stability of the construction, the tomb and bunker. Aquarius resonates with the aim sof innovation and individuality (extravagance).

Geodesic domes are the ideal shape for visual projections of the sky onto the ceiling of buildings. therefore domes have played a major role in the construction of larger planetariums since the first dome was built for that purpose at Jena, Germany between 1924-26. The dome was designed as an attempt to establish a first Ptolemaeic planetarium. The astrogeographical position in Scorpio reflects the important resonance of this sign with domes.

Steiner´s first Goetheanum built between 1913 and 1920 in Dornach, Switzerland was also located in Scorpio. The dome wasn`t meant to represent a helmet – but rather a resonance with the celestial and with the the ideal of a cosmic vision.

B 1  Aries – unicellular organisms in architecture

Aries is the first sign of the zodiac reflecting the first and most basic experience of physical existence and the competition for survival. It therefore relates to the tendency to seek a homogeneous one dimensional and compact understanding of a building. This unicellular aspect can express itself in rocket-like phallic towers and also in dome like structures. Compare my two articles on the expression Aries in architecture:  Characteristic features of  phallic shape in Aries  and  Aries as the Sign of Unicellular Structures: Astrodome & Co..

B 1  Aries – unicellular organisms in architecture

Temppeliaukio Kirkko in Helsinki, Finland, is a thrilling work of modern architecture and another fascinating example for the reflex of Aries to concentrate on a single, indivdualized center.. Sagittarius is a major resonator for round and semicircled forms in architecture and for the decorative, ornamental function of cuppulae on top of buildings.

B 2  Scorpio – the sign of sculpting in situ, of mushroom and of the underworld

Scorpio is the sign of sculpting and of working buildings and statues out from the ground through stone masonry. It therefore literally relates to monolithic architecture as its first and foremost representative. In addition to that as the sign of the underworld Scorpio also relates to concentrating on the inside of hermetically closed-up buildings and on the stability of their foundations. Compare the examples of sculptures created in situ from the Scorpio as the sign of Sculpting list.

Weather or not the round structures of Göbekli Tepe were built as domes with wood roofs is unknown. But they are assumed to have had roofs made from wood and or grass at some stage.

Inaugurated in 981 A.D. the the 18 m tall temple statue of a deity named Sri Gomateshvara on the mountain of Shravanabelagola (“The Monks on the Mountain”) in the Indian state of Karnataka is the largest free standing statue worldwide that was carved from the rock in situ. The astrogeographical position of the Shravanabelagola statue is another clearest proof of the resonance of Scorpio with monolithic architecture.