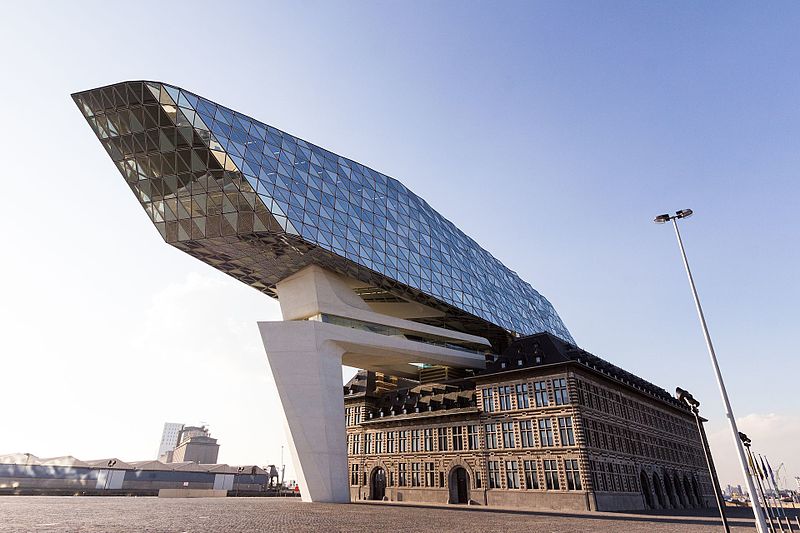 Astrology and architecture: characteristic features of Aries. Some thoughts on an astrogeographical typology of design elements in Aries.

Related articles:  Aries as the Sign of Unicellular Structures: Astrodome & Co,  Hallgríms Church in Reykjavík, Libra as the sign of symmetry,

In my experience from astrogeographical field study so far I have found three major different strategies of design that are definitely symptomatic of fire sign Aries.

First is the sharp-edged design as in the Monument for the Conquerers of Space or Sidney Opera House. Such sharp elements relate to the aggressive quality od Aries.  Second is the preference of building towers as related to Aries` role as the sign of  the phallus and of erection as the  phallic shape of Aries. Third are what I call the design of unicellular structures which relates the role of Aries as the resonating sign of the first organ in the human system and the first and most basic one of the 12  signs of the zodiac.

Crystal Cathedral in Garden Grove, Orange, California, designed by American Institute of Architects’ gold-medal winner, Philip Johnson with his partner, John Burgee was built between 1977 and 1980.

Astrogeographic position: Crystal Cathedral is an example for particularly sharp and aggressive shapes. A symptomatic element of buildings located in the dynamic, male, phallic fire sign Aries and its aspect as the sign of aggression. The 2nd coordinate here is in between the water sign Scorpio and in the mental fire sign Sagittarius the most important sign of design, style and fashion. Valid for morphogenetic field level 4.

The Monument for the Conquerers of Space in Aries with Gemini

The Monument to the Conquerors of Space in Moscow built in 1964 is 110 m tall and covered with Titanium.

Astrogeographic position: it is Located in the dynamic, male aggressive fire sign Aries the sign of speed and of warfare which stands for the sharp clawlike form of the tower. As a fire sign Aries is the indicator for the rockets. In its aspect as the first sign of the zodiac it stands for the pioneers in space. And as the sign of warfare it is the indicator for the urge to “conquer” space here. The 2nd coordinate is located in the technology orientated, expansive air sign Gemini the sign of learning which stands for the role of scientific research and technology. In Its aspect as an air sign Gemini stands This is for radius/field level 4 which describes the building itself

Sidney Opera House was built in the constellation of creative, innovative air sign Aquarius sign of inventions, mutations, self-finding and inspiration with dynamic, male fire sign Aries sign of ignition, action, speed, strength, warfare, sports. This combination is valid for astrogeographical radius/field level 3, which shows how the construction site on a small peninsula is embedded in the surrounding area in the harbour of Sidney. This highly dynamic astrogeographical combination stands for mutation, innovation and attempts to materialize ideals and inspiration. It stands for starting something new and for the focus on direct action and revolution.  In regard to the function as an opera house it indicates that experimental art and architecture have more importance here than the mere listening and reception of sound or music itself. In this sense the site does not indicate a concert hall in the sense of a place for listening or feeling the music in the first place but rather a site for inspiration. The constellation may rather support rythm and particularly the atmosphere of fire sign Aries could be to some extent in conflict with melody. No wonder that despite its name the building is a center for performances of all different kinds of arts. The building hosts 2 concert halls, 3 theatres and a couple of restaurants and bars. Before the beginning of construction work on the new opera house the construction site hosted a tram repair center.

The position in Aquarius is aymptomatic for peninsulae especially when they are long and narrow.  Examples: Cape of Good Hope,  Gibraltar.

The roof consists of white elements that can be seen as pieces of oyster (pointed form) or egg (white colour) like shells and possibly also a ship´s sails or even its nose. Because their form unlike shells or sails is pointed into the air in a curved way so that their shape is a bit bent and thus kind of overstyled, there could even be the association of beaks or claws. This male or as it is seen in feng shui agressive element of form where energy and awareness are concentrated towards the tips is to be considered as a typical feature of fire sign Aries. Among other aspects Aquarius stands for the prominent and “far out” position of the site on the tip of a peninsula that reaches out into the harbour. The association of the shape of the building with sails or tents would have to be seen as related to air sign Aquarius the sign of the wind and most important astogeographical indicator for sails as well as for tent

Hallgrims Church in Aries with Aquarius

Hallgrímskirkja is a Lutheran church in Reykjavik, Iceland built from 1945 until 1986 and designed by architect Guðjón Samúelsson. It is named after the Icelandic poet and clergyman Hallgrímur Pétursson (1614-1674). Its tower stands out 74,5 m  over the town of Reykjavik due to its position on a hill.

The building is a really intense example for the astrogeographical constellation of the air sign Aquarius with fire sign Aries. This constellation is valid for morphogenetic radius/field level 4 here, which describes the building itself. Both astrogeographical aspects of the place, Aries as well as Aquarius put an emphasis on the tower. Aries because of its relation to phallic forms and Aquarius as the sign of the connection of the earth with the sky.

The combination of Aries with Aquarius, like no other stands for the momentum of the change (mutation) of form. The mutation of the common types of church buildings here is represented by the organ pipe like structures attached to the tower and descending on the right and left side. These structures are said to represent basalt lava wand formations that are so typical for Iceland. They are important for the overall appearance of the building even though they were not built for the stability of the tower building. This means that they are almost pure ornaments especially considering the congruence of the two wings.

The classical forms of church towers are put in question by this element of the building and the tower is sort of woven into the landscape and through that its energetical groundation is spread and stabilised to some extent.

The decision for the concept designed by Samúelsson was made in 1937, a time when rocket launchers had been designed already. The association of a rocket launcher for a church suggests the potential of religion to make a “physical” ascension to heaven or into the cosmos possible.

The physical aspect and speed to make this possible is reflected astrologically by the sign of Aries, which in case of a rocket stands for the ignition and fuel combustion. Aquarius the sign of the sky and of heaven reflects the topic of re-connection with the full extent of the true potentials of physical beings. The topic of re-connection with the cosmos and sky is represented by the fact that the tower is pointing at the sky, by its height and by the way it is sharpening while ascending. Bringing a new element into the history of the architecture of churches may be seen as a stylistic incongruity here, but is also an element of re-connection by reminding people of the full extent of possible choices.

The tower of the Cathedral de Pedra of our Lady of Lourdes at Canela, Brasil stands 65 m tall, The visual focus on the central spire and onto the top of the tower is the prominent idea of its design.

Astrogeographic position for morphogenetic field level 3: the church is located in dynamic, male fire sign Aries the sign of towers and indicator for the rocket-like shape of the front facade. A similar rocket-like design can also be studied at Halgrimskirkja in Iceland.
The 2nd coordinate here is located in the solid, conservative, hierarchical earth sign Capricorn the sign of mid-heaven and an indicator for the strife for a prominent role,

Spires are male elements of architecture. In Feng Shui their form is seen as a questionable element of style as the are considered to represent the aggressive intention with a potentially aggressive effect.
But from the point of view of astrogeographical field studies the question arises wether their presence in morphoogenetic fields located in Aries could possibly effect a harmonious stimulation of the flow of energies in a landscape. St. Peters Church in Lewes, Delaware is located in the combination of Aries the sign of rockets with Pisces the sign of spirituality and temples.

St. Vinzenz Pilgrimage Church at Heiligenblut (meaning sacred blood), Kärnten, Austria. The town is named after a small bottle that was supposed to contain sacred blood of Jesus brought here by a danish prince named Briccius in 914 CE on his way back from Constantinople. The long spire rises above the church in front of the panorama of Großglockner one of the sacred mountains of Austria and with 3798 m the countriest highest.

Eiffel Tower and Field of Mars in Aries with Pisces

The Eiffel Tower was built in 1887-1889 on the occasion of the centenary of the French Revolution for the World Exhibition in Paris in 1889.

Astrogeographic position: Eiffel Tower is situated on the Field of Mars in the constellation of the male dynamic fire sign Aries whose ruler is Mars with the highly imaginative, spiritual water sign Pisces. This applies to the morphogenetic field level 3, which shows how the tower is embedded in the surrounding area. The principle of Aries is in many ways symbolic of the Eiffel Tower. First of all as it is constructed from iron, the element which is the main symbol of Aries. Secondly because the image of a single placed phallic form is a basic motif of Aries the first male aspect in astrology. Thirdly beacuse the Eiffel tower is a pioneer construction. The sign Pisces stands for the character of the site as an urban open space that is energetically independent from the character of the environment.

Sails on the horizon: San José María Escrivá Church in Aries with Libra

Astrogeographical position for morphogenetic field level 4 (exact position) which describes the topics of the building itself: one coordinate in fire sign Aries indicator for the visual and energetical focus on the pointed ends of the two sails. 2nd coordinate is in air sign Libra sign of harmony, balance, beauty, decoration and as an air sign a natural indicator for the presentation of the two concrete walls as sails on the horizon.

The red colour of Chalice Well as a symbol for Aries

Chalice Well is a magic spring in mystic town of Glastonbury, England.

Astrogeographic position: Chalice Well the “Red Spring” is located half way between Glastonbury Abbey (Pisces-Pisces) the supposed burial place of King Arthur and the entrance to Avalon and Glastonbury Tor (Aries-Aries) but in the morphogenetic field of Glastonbury Tor with both coordinates in dynamic, male fire sign Aries. The red color of the water of Chalice Well is due to iron oxide deposits. Iron is a symbol for Aries & its ruler Mars. This constellation is valid for morphogenetic field level 3 which describes how these two places are embedded in the town of Glastonbury Abbey. Read more about the astrogeographic polarity between Glastonbury Abbey and Tor here.

Chalice well has the position of a bridge in between Glastonbury Abbey and Glastonbury Tor. For morphogenetic field level 4 which describes the place itself its position has both coordinates in the air sign Gemini the sign of pathways and bridges.