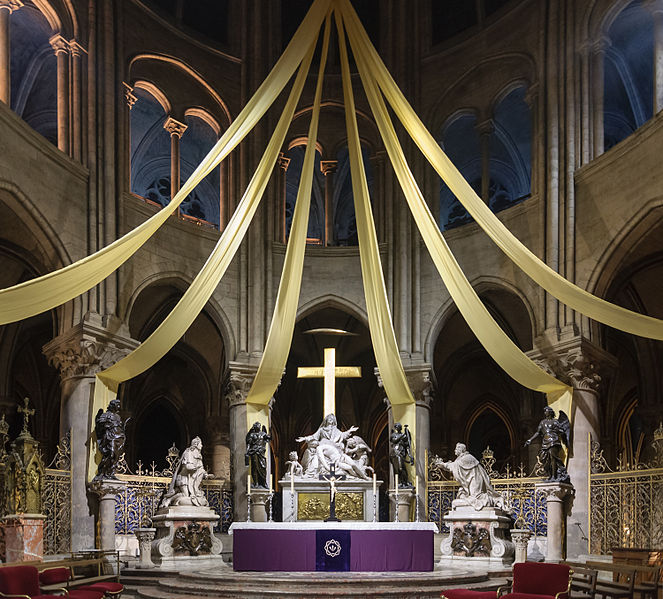 27°Aquarius and 28°Sagittarius – the astrogeograophical resonance degrees of Paris

Paris is located at 27° in creative, innovative, rebellious, holisticair sign Aquarius the sign of the sky, abstraction, paradise, revolution, self-finding and reconnection with the fuller amount of human potential and individuality and 28° of fire sign Sagittarius sign of style, design, fashion, thinking, voyeurism, initiation, luxury and success.

Leo and Taurus – Aspects of a sun and earth temple

Astrogeographical position of Notre-Dame for morphogenetic field level 4 (exact position) which describes the energetical topics of the church building itself: one coordinate is located in highly energetic, magnetic, royal fire sign Leo the sign of the sun, light, heart, power stations, royalism, absolutism, luxury, magnificence, sexuality and the self-centeredness of humans. And Leo is particularly important here also as the most important resonance sign of french culture. The second coordinate is located in solid, fixed earth sign Taurus the sign of the earth, ground, roots, gravity, local energetical centers. agriculture, food, market places, possessiion of territory, the banking system and of town centers. In the combination of emotional fire sign Leo with material earth sign Taurus the two most important systemical astrological factors for creating centers (sgns of centralism) the so-called centripetal forces are amalgamated – or say welded together. Read my article on centripetal and centrifugal signs in astrogeography here.

The conclusion to be drawn from this astrogeographical resonance here is that the main topic of the church is not spirituality a such nor the reconnection with the spiritual plane in the first place. The topics of Notre – Dame appear to be directed at the physical, touchable, possessable (Taurus) and the liveable (Leo) aspects of spirituality. Commentators that call Notre-Dame the “Heart of France” therefore seem to celebrate the supercentralistic role of Paris in relation to France in the first place. That role had found its climax expression in the era of the Sun King Louis XIV and of absolutism .

The laying of the foundation stone for Notre-Dame

There is apparently no certain information on the date of the laying of the foundation stone for the cathedral of Notre Dame de Paris. The french wiki article tells us that the chronist  Jean de Saint-Victor in his “Memoriale Historiarum, veut (“wants”) qu’entre le 24 mars et le 25 avril 1163, le pape Alexandre III alors réfugié à Sens, pose lui-même la première pierre en présence du roi Louis VII.“. The following Notre- Dame “natal chart” is calculated for the spring equinox of 1163 – given here as the Julian date of March, 14 1163.

From an astrogeographical persepective the most important transit of one of the 12 systemically important planetary fators was the position of Neptune the planet of spirituality at 26°Sagittarius conjunct the 28°Sagittarius resonance coordinate of Paris. Now Neptune can be interpreted in two different direction ways: intoxication, paralysis, illusion, self-destruction, weakness and also as a momentum dediated at the spiritual reconnection, self-healing and baptism.

What can be taken as realistic is that the Neptune transit over Paris during the start of construction of Notre Dame is a hint that the catholic roman church sought to manifest and stabilize its control over France through a central national church building. A similar development was attempted through the start of construction of Cologne Cathedral on 15 August 1248 with Neptune at 5° Cancer approach in the 10°Cancer astrogeographical resonance degree of Berlin.

The chart for the first consecration of Notre -Dame de Paris

But there is one date that the french wiki article on the history of the construction of Notre-Dame does provide. It s for the first consecration of the high altar on May 19 1182 julian date by cardinal Henri de Château-Marçay.

The construction of the large gothic churches was often a process of centuries. In order to be able to use them for service they were built in such a way that the central high altar was erected first and the construction of other parts of the building carried out later. That was also the case with Notre-Dame de Paris.

For evaluation of this data we need to of course recapitulate that the date does not describe the history of the physical construction process in the first place. And it is of course not the first chart for us to recapitulate the building structure itself. But it can serve as a valid chart for the catholic priest magic implanted in Notre-Dame and the spiritual relation to the christian mother goddess, the catholic church itself, its history and problems, the relationship between the church and the local Parisian population and even the relationship of Notre Dame with the overall morphic field of Paris, France and Europe through comparison with the astrogeographical data.

Looking deeper – one of the first question I personally have is to examine in how far the astrological chart reflects the authenticity of the assumed connection created during the consecration of the high altar between the building and the spiritual entitiy named here as Notre -Dame. Which aspect of Mary does the chart reflect? Is it the earth mother (Taurus), fertility (Cancer), the aphrodite aspect of the madonna without child (Libra-Pisces) a.s.o..

Looking at the midday chart – we can assume that the Moon was on the last degrees in Scorpio the sign of the craftmens guilds and in direct tension through the square to the the 27°Aquarius resonance coordinate of Paris – which stands for the uncontrollability, revolutionary aspects of the low and slavery classes. This could mean that the meant idol of the Holy Mother during the consecration was an ideological, sculpted image dedicated to reinforcing the given economical structures with Parisian society. The same is explained by the position of Jupiter the planet of shamanism, initiation, cardinals, priestly authority, healing at 25°Taurus the sign of market places and the degrees of ultimate wealth. Jupiter in resonance with the profiteers from the City of Paris was exactly square to the City of Paris too. – just like the moon but from a different angle. That means the craftmens and the traders guilds – though opposed to each other from Scorpio to Taurus appeared as the financiers of the new Notre-Dame project.

The 2nd tower tower at the crossroads of the transept with the main nave collapsed in the middle of 18th century, so that the church had no intact central inner tower between 1786 and 1859 until the newly constructed one was inaugurated.

Inauguration of the new spire was celebrated on 15 August 1859 during a Mars (14°) – Saturn (16°) conjunction of warfare, soldier castes and strongest efforts in the very center of Leo the astrogeographical significators of the centeralistic role of Notre-Dame and the sign of french culture indicating the magical purpose of installing a spire (needle) of national military alertness.

The square aspect of Venus the planet of copper with Pluto the planet of lead should be observed as a potential factor to describes the instability of the new spire. This is because Venus as the ruler of the physical heavy weight Taurus (fixed sign) the sign of gravity and one of the two resonating signs of the church building itself (fl4) was in Leo (another fixed heavyweight sign) but a sign of tension (square) with some – not all – aspects of Taurus.

Neptune the systemical indicator of spirituality was at 26° in Pisces and exactly square to the 28°Sagittarius coordinate of Paris. This transit of tension for Paris might explain the new fashion of the mystification of Notre-Dame as a central church for the strength of Paris and France in warfare (Mars-Saturn cj.) as an illusion. If not even a threat – as it may have revoked the Napoleonic “virtues” or those from the French Revolution wich lay in the independence from such symbolic projections and concentrated on factual mobilisation.