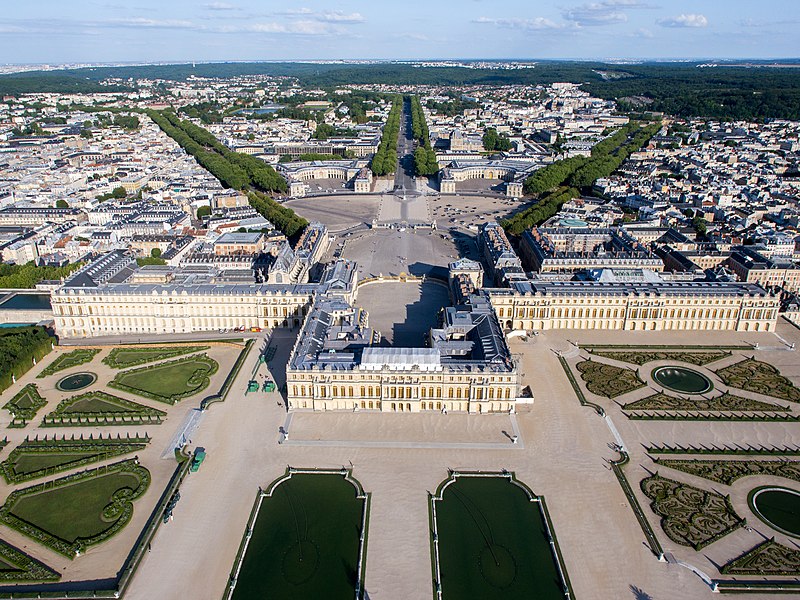 The Palace of Versailles in Astrology and Astrogeography and Louis XIV`s personal astrogeographical aspects at Versailles.

Compare: Great Pramid of Giza,  Rundāle Palace the “Baltic Versailles” in Virgo, Examples for Virgo`s combination with the 12 signs in astrogeography, Gemini and Virgo: Samye Gompa the oldest monastery in Tibet, Virgo and Gemini: The Greenpeace Headquarters in Amsterdam, Valley of the Kings

The Palace of Versailles (Château de Versailles) was developed from a simple hunting lodge built by Louis XIII in 1623 to one of the largest, most costly and most glamorous royal palaces of Europe in several phases between 1631 and 1715 by Louis XIII and Louis XIV.

Astrogeographical positions of the Palace of Versailles and Park Area for morphogenetic radius/field level 3 (surrounding area) which describes how the palace and park area are embedded in the landscape: the astrogeographical latitude coordinate of the palace and the whole park area lies in self-protective earth sign Virgo sign of protected places, conservation, reason, health, strategical planning, gardening, plants, protection of nature and most important astrogeographical indicator for parks. Virgo stands for the preference of the luxury of a palace and seat of government outside of the capital and away from the pollution.

The longitude coordinate of the palace of Versailles itself lies in the first decade of air sign Gemini sign of signposts, symbols, communication, gathering and passing on of information, language, learning, spying, technology, schools, testing and indicator for an interface or communication center.

The 3 km long park area to the west of the castle covers the full lengths of fire sign Aries sign of action, speed, fighting, sports and warfare at the west half and of solid, stable earth sign Taurus sign of the earth, grounding and possession of territory at the east half of the park.

Similar to the site of the Great Pramid of Giza which is located in the same sign combination (Virgo + Gemini) the position in Gemini describes Versailles as a school of architecture, construction work, gardening, politics, secretaries, too.

Astrogeographic position for morphogenetic radius/field level 2 (city) which describes how the the city of Versailles is embedded in the Paris Metropolitain Region: one coordinate lies in highly relaxed, spiritual water sign Pisces sign of sleeping, holidays, letting go, entertainment, illusions, the dream world and indicator for an area that is comparatively protected from energetical impact of the surrounding morphic fields.

The 2nd coordinate lies in creative, innovative air sign Aquarius sign of the sky, heaven, paradise, self-finding, reconnection, self-liberation and one of the two astrogeographical resonators of the region of Paris.

Louis XIV of France who reigned as the “Sun King” from 1643 until 1715 moved the royal court from the Louvre Palace in the City of Paris to Versailles making the Palace of Versailles the residence and home of the French kings, the seat of government and political center until the French Revolution in 1789. The court was officially established in Versailles on 6 May 1682.

The astrogeographical position in Gemini falls in the seventh house of Louis`s birth chart right on the position of Pluto the ruler of his ascending sign Scorpio. The seventh house position supports the motivation for relationships and stands for opening up to the expectations of other people. It generally indicates a situation like the one of an actor on a stage. It is a major and maybe the best aspect for personal success and fame. It also stands for a situation where an individual is not in its own territory and home but in an exposed place and either a public or somebody else`s territory. The seventh house aspect is so frequent in the relationship of highly successful royals to their residences that it has to be seen as symptomatic. Compare: Catherine II at Winter Palace Elizabeth II at Buckingham Palace

Louis XIV chose the Sun as his emblem and was named the “Sun King” for creating a centralist and absolutist reign around himself. This could lead astrologers to relating him to Leo the astrological sign of the Sun. But a closer look at his birth chart reveals that he had only his female aspects, the Moon and Venus in Leo. The planets that represent his personality, the Ascendant in Scorpio, the Sun in Virgo and Mars in Sagitarius in the second house are in signs that put the Sun (and the sign of Leo) in question. In the case of the autumnal signs Scorpio and Sagittarius this is because they represent the stations in the yearly cycle of the Sun, when the Sun is in decay. Virgo because Leo the sign of the Sun is in the twelfth house from Virgo, which means that the aspects of Leo for Virgo are like banned from existence.

This indicates that the Sun is used as a symbol and in a propagandistic way to relate the king to the centre of light and the Sun God himself. Scorpio as the sign of dogs naturally stands for hierarchical situations and for the domination of a “strong” over a “weaker” individual. The motif in Scorpio of using the Sun or the sign of Leo, the ruler and king among the animals as an emblem or symbol can be observed at places in Scorpio in many cases. The fortress of Sigiriya is a good example for this.

Because Pluto the ruling planet of Louis` Ascendent in Scorpio is situated on the exact position of one of the astrogeographical coordinates of the site, Louis` role in Versailles is to be judged by the position of Pluto. This may lead to the conclusion that the Sun King should for a better understanding of this symbolism be observed as a Scorpio or Pluto King. Compare: Aquarius and Leo – The Capital of the Sun God Aton

If Leo was considered to be the astrological sign of French culture, the symbolism of a Sun King would be considered to represent a symptomatic feature of the aspect of Leo in French culture. But in fact Leo rather stands for the subjective autonomy of all individuals and the right of the individual to be its own king and this was the main impulse for abolishing absolutism during the french revolution.

Virgo supports the tenth house in Louis` birth chart indicating a situation of living in the astrological house of his job, duty and public responsibility. This aspect puts even more emphasis on the fact that Versailles was no private home but rather a place that brought Louis in a situation of living in public territory and being exposed to public surveillance in any moment of his life here.

The constellation of the seventh house with the tenth house can be evaluated as symptomatic of situations where a head of state stands fully exposed to surveillance, espionage and intrigues at the court.

Whereas this constellation puts a lot of stress on an individual`s privacy sphere it can be considered as stimulative for one`s career because it has a lot of potential to support the motivation for work and service and so stands for personal success and fame. Working and living here at the same time would not necessarily have to be recommended by an astrogeographical analyst, particularly not for celebrities, because it leaves them exposed to the threats from opponents thus providing reasons for rivalry, stress and paranoia.