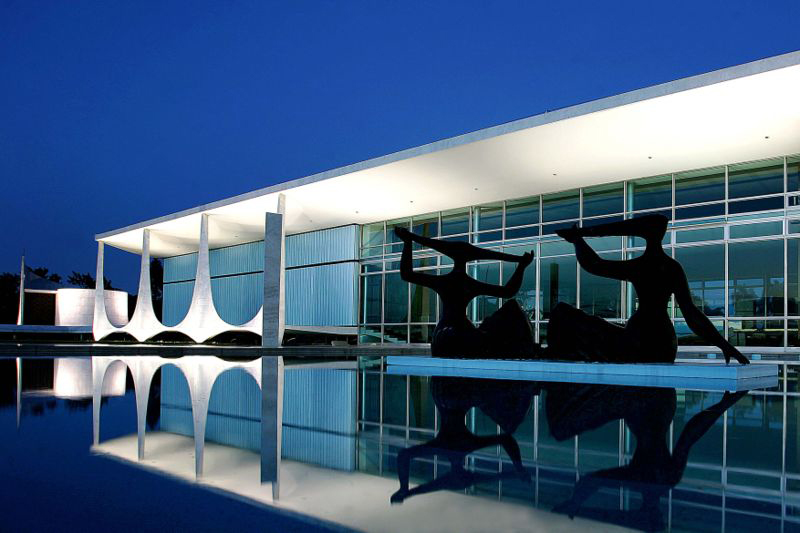 The astrogeographical position of Brasilia and transits of the outer planets in relation to the Brazilian government. Political & mundane astrology and history: data and analyses

The astrogeographical position of Brasilia

The city of Brasilia was founded by President Juscelino Kubitschek on April 21, 1960 to serve as the new national capital of Brazil. It is located at the top of the Brazilian highlands in the country’s center-western region of the country.

The 2nd coordinate is at 25° in air sign Gemini the sign of road crossings, interfaces, communication, sign-posts, letters, language, symbols, information, bridges and of bringing opposites together. The position that stretches in the last 5 degrees of Gemini stands for ta capital dedicated to democracy, civil rights, personal liberty of self-expression and opinion and emancipation from social hierarchy, caste systems, slavery and racism. Gemini stands for a tendency of anti-centralism and support of the federal organisation of a nation and its institutions. Compare the double Gemini correspondence of the “Germany-Field” and the 1200 years tradition of going without a capital.

The choice of the symbolism of a cross, bird or aeroplane like formation with a central road crossing between N-S and E-W directions for the central axis of the government area should be investigated in relation to the astrogeographical resonance with air sign Gemini

The combination of Aries with Gemini for a capital can be investigated as a sign combination that points at the qualities of a military headquarter (19° Aries as a zodiac degree of officers and military leaders) and an operational and communicational interface (Gemini).

The lack of a stabilizing, highly centralist resonance coordinate (Leo (China, USA, India, Saudi-Arabia), Taurus (Russia, India) Cancer (USA, Russia) like in the case of other super-large nations may be examined here as an indication of tendencies of a certain lack of control and stability of central governments and their administration.

Other Capitals of Brazil

Astrogeographical position of the capital of Salvador de Bahia which describes the nation-wide, international, supra-regional resonance of Salvador`s role as the political and national center of Brazil: Salvador has one coordinate at 12° in creative, innovative air sign Aquarius the sign of the sky, heaven, paradise, innovation, emancipation and revolution and the 2nd coordinate at 19°in air aristocratic air sign Libra the sign of harmony, balance, symmetry, justice and courts.

Astrogeographical position of the capital of Rio de Janeiro which describes the international, supra-regional resonance of the topics the role of Rio role as the political and national center of Brazil: the city has one coordinate at 11°in air aristocratic air sign Libra the sign of harmony, balance, symmetry, justice and courts. The 2nd coordinate is at 22°in highly magnetic, centralist royal fire sign Leo the sign of the sun, heart, power stations and kings.

The foundation chart of Brasilia

The Presidential Palace building in astrogeography

Astrogeographical position of the Presidential Palace at Brasilia for morphogenetic field level 4 which describes the energetical topics and atmosphere of the building itself: the astrogeographical longitude coordinate is located in self-protective earth sign Virgo sign of reason, health, strategical planning, adaptation, optimal use of resources, protection of nature, gardening, parks. For a presidential residence Virgo supports careful calculation and planning.

The astrogeographical latitude coordinate has 80 % of the building in self-centering emotional water sign Cancer sign of the moon, motherhood, pregnancy, fertility, feeling at home, emotional individuality and inheritance. As the sign of crabs Cancer resonates with the location of the construction site on the beach of Paranoa Lake. For a presidential seat Cancer supports dealing with the topics of the motherland, emotional inheritance, social issues and the topic of the homeland. The south end of the building is in highly magnetic, centralist, royal fire sign Leo sign of the sun, light, self-esteem, glamour, gold and emotional self-expression. Altogether the relative figures of energetical qualities are 80% social care and emotional authenticity (Cancer) and 20 % for glamour and fascination (Leo).

The inauguration of the new capital Brasilia in 1960

This constellation could simply mean that the new capital was closely checked, examined and tested on that day in the first place.

Brazilian Natal chart I: the Declaration of Independence of 1822

The transit of Uranus over the exact astrogeographical position of Brasilia at 19°Aries was effective between March 2015 and April 2016. Uranus did of course stand for the need to reconnect with the country`s fuller potentials. But Uranus` transit occurred under the influence of the globalized neo-fascist movement that has been organized in the course of Uranus` first return to Aries since the period of the rise of fascism between 1927 and 1934. The effects of the Uranus transit seem to have destabilized the belief of the population in the ruling class of politicians and led to the suspension of President Dilma Rousseff with Uranus at 22°Aries conjunct and Pluto at 17°Capricorn square the 19°Aries astrogeographical position of the capital Brasilia on 12 may 2016.

The 2018 general elections in Brazil take place during the transit of the heaviest threat onto the Nrazilian governments from Pluto at 19°Capricorn in exact square to Brasilia. Pluto stands for ideology, dogma, foreign control, hierarchy, trauma, pain and the need for transformation. The pressure on the government of Brazil from this transit has been effective since March 2016 and is now in late 2018 about to reach its final climax in November 2018 when Pluto will move away from the exact square position.  The effects of this Pluto transit cannot be reduced to the danger of the neo-fascist dictatorship-orientated candidate Bolsonaro taking over power alone. In fact there is and has been a long chain of events before that – with the imprisonment of former President Lula in April 2018 as the climax of self-destruction of Brazilian democracy.

It seems like the rule of criminal organisations over large parts of the country may have caused larger parts of the population to resignate and opt for an authoritarian government instead.

From an astrogeographical point of view the next option for liberalization could come under the transit of Neptune over the 25°Pisces square position to Brasilia`s 25°Gemini coordinate between April 2022 and March 2024. But Neptune in a square to the capital is also a clearest danger of foreign occupation of the democratic institutions -of Brazil – because this is what the capital Brasilia stands for and/or their suppression through the anti – democratic globally organized neo-fascist alliance which is  propagated by  the current US government.

Jair Bolsonaro the representative of the neo-fascist globalization movement in the Brazilian elections was born with a Jupiter-Uranus conjunction and his ascendant on the astrogeographical position of the presidential palace in Cancer and with its second coordinate in house 2 the house of possession of property and occupation of land.

The combination of houses 1 and 2  at the place reflects the danger of him seeing himself as the owner, personal ruler and representative of the institution – its master and not its servant. This constellation absolutely suggests the highest danger of the appeal for autocratic rule and dictatorship.