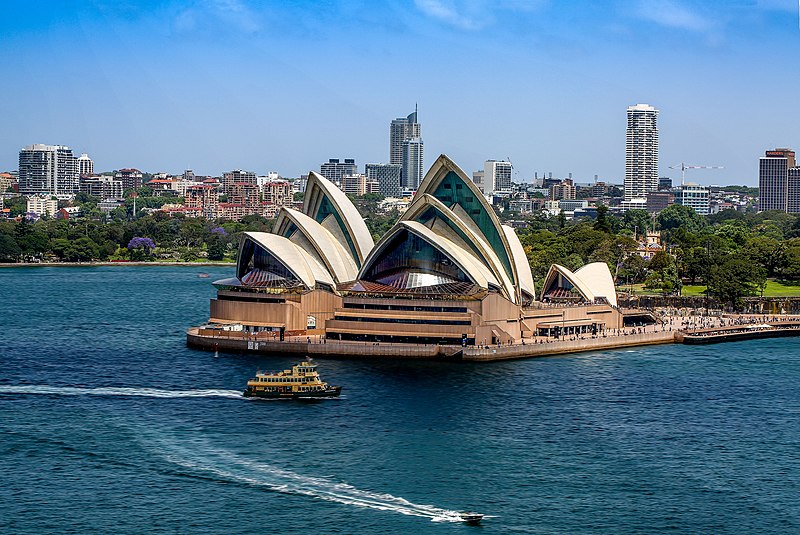 Related Articles: Lying or Flying – The Controversy between Taurus and Aquarius at the leaning tower of in Pisa, Pisces as the sign of music and of opera houses, Distortion as an element of style in Aquarius, Aries as the Sign of Unicellular Structures, Characteristic features of Aries, Hallgríms Church in Reykjavík, Aquarius with Pisces: The Ship on the Hill, Die neue Elbphilharmonie aus astrogeographischer Sicht.

Sydney Opera House has been called the flagship of modern Australia due to its innovative architectural design. The performing arts center is located in the harbor of the City of Sidney, Australia. The building is 184 m long and 118 m wide, comprising multiple performance venues, which together host over 1,500 performances annually, attended by more than 1.2 million people. Construction was started on March 1 1959 and the new opera house was officially inaugurated Queen Elizabeth II on October 20, 1973.

Astrogeographical resonance coordfinates of the City of Sydney for morphogenetic field level 1 which describe the nation-wide, international, global resonance topics of the city: Sydney is located at 15°Sagittarius and 3°Cancer.

Astrogeographical position for morphogenetic field level 3, which describes the energetical topics of the construction site on a small peninsula and how it is embedded in the surrounding area in the harbor of Sidney: the famous Sidney Opera House has one coordinate in creative, innovative, spiritual air sign Aquarius sign of the water bearer, the sky, heaven, paradise, flying, escaping, leaving the past behind, abstraction, innovation, inventions, mutation, revolution, self-finding and of inspiration.

The 2nd coordinate is located in dynamic, male fire sign Aries sign of ignition, action, speed, strength, warfare, sports. mobilization. As the astrological resonator of the level of existence that relates us humans to our origins as unicellular entities Aries may particularly support the presence, self expression, feeling, sound qualities and reception of solo performances.

Which aspects of music and art do Aquarius and Aries relate to?

The stimulation through the highly dynamical astrogeographical combination of Aquarius with Aries stands for mutation, innovation and attempts to materialize ideals and inspiration. It stands for starting something new and for the focus on direct action and revolution.  In regard to the function as an opera house it could indicate a tendency that inspiration through experimental art and architecture have more importance here than the mere listening and reception of sound or music itself. In this sense the site does not indicate a concert hall in the sense of a place for listening or feeling the music in the first place but rather a site for inspiration and receiving stimulation and motivation for the future.

The constellation should support rhythm, tempo, intellectual independence, courage for experiments and abstract art. There is a question in how far the stimulation from fire sign Aries could be to some extent in conflict with melancholy and melody. It can be assumed that Vincent van Gogh born with the Sun in Aries and Ascendant in Cancer the sign of melody and melancholy can be assumed to have dealt with that tension.

Aquarius resonates with sensations of flying and taking off on music as through the music of Mozart (born with Sun in Aquarius). In regard to music aspects of particular intensity of expression and experience of fire sign Aries can lie in straightforward expression and also in dealing with tempo (Eric Clapton – Sun in Aries) and speed (Ritchie Blackmore – Sun in Aries)

Architectural elements of style and design of Aries and Aquarius

Sidney Opera House was built on the site of a former tram repair center. This associates the concept of an opera house with the concept of placing art into the working field of artistic inspiration and production and away from any assumed concept of a perfectly sterile pseudo-classicism.

The position in Aquarius is aymptomatic for peninsulae especially when they are long and narrow.  Examples: Cape of Good Hope,  Gibraltar.

The roof consists of white elements that can be seen as pieces of sea or egg shells (white colour) with oyster – like forms (pointed) or pieces eggs like shells and sail boats above the sea water. The bent shape of these roof elements may be seen as over-styled or be interpreted as associated to beaks or claws. Such pointed shapes are to be evaluated as male elements of form and with a tendency of aggression or alertness as the focus of energy and awareness are concentrated towards their tips. Therefore they represent elements of form that resonate with fire sign Aries.

The association of the shape of the building with sails or tents resonates with Aquarius` aspect as the sign of the wind, airs, flying, sailing and also sails and tents as such.

Among other aspects Aquarius also stands for the choice of a location at the tip of a peninsula that reaches out into the harbor exposing the opera house to the elements (wind, water and sun) and being located outside of the narrowness of the nearby town center. This aspect of the construction site can be understood to evokes and stimulate the reflexes of Aquarius that attempt to escape the narrowness, dependence, slavery and foreign control through mainstream culture and opinions an the human race for a prominent position in the hierarchy at the center of society. For a deeper research on the centrifugal reflexes in Aquarius read my article: Lying of Flying the controversy between Aquarius and Taurus, bohème and bourgeoisie, spirituality and material needs at the leaning tower of Pisa.

The choice of the location in Aquarius and the extravagance of the design are statements that aim at defining modernity of art and architecture through the contrast with traditionalism and reconnecting with the abstract issues at the bottom of all concerns of art, self-reflection and existence itself.

The new Elbphilharmonie in Hamburg located in Aries and Pisces

The new Elbphilharmonie building in Hamburg inaugurated in 2016 represents important parallels with the construction site of Sidney Opera House: its location in fire sign Aries and in the harbor.