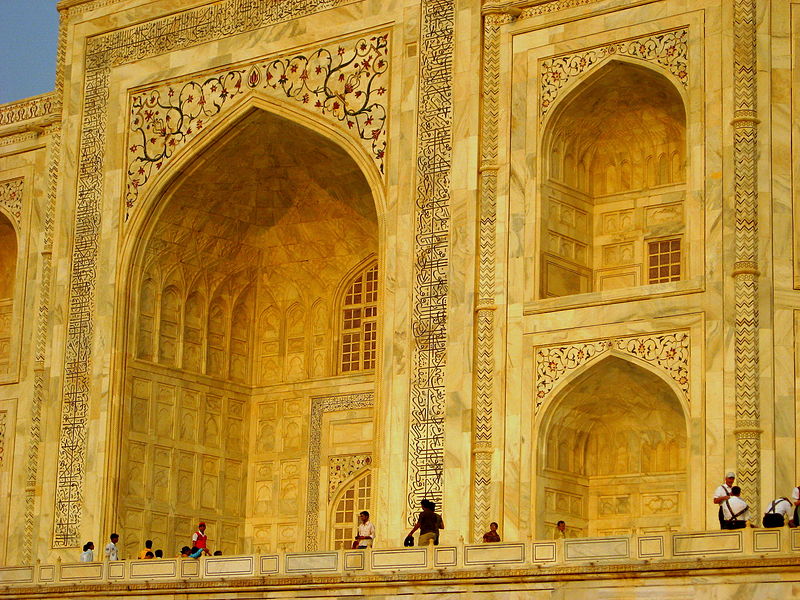 Related articles: Astrology and Architecture: Shapes of Scorpio, The Hagia Sophia as a Temple of the Earth Mother, Steiner`s Goetheanum, Scorpio as the sign of sculpting, Beijing Opera House,

Taurus and Scorpio – The Taj Mahal in Agra

The Taj Mahal the “Crown of Palaces” was built by the Mughal emperor Shah Jahan (born on January, 5 1592) as a mausoleum for himself and his wife, Mumtaz Mahal (born on April, 27 1593) during the years 1631-1648. The reign of Shah Jahan is considered the golden age Mughal architecture.

The Taj Mahal is regarded by many as the best example of Mughal architecture and has a recognition of being the largest, most elaborate and expensive building ever built for the ideal of love. The total cost of the Taj has been estimated to be about 32 million Indian rupees at the time which is around 52.8 billion Indian rupees or $ 827 million US based on 2015 values. The Tomb of Emperor Humayun in Delhi built between 1562-70 is an earlier example for a representative moghul mausoleum.

Astrogeographic position of the Taj Mahal for morphogenetic field level 3 which describes the atmosphere and energetical topics of the whole area of the Taj buildings and gardens:  Taj Mahal is located in defensive water sign Scorpio the sign of sculpting, sculptures, imaging, stone masonry, death and tombs. The function of the building as a burial place is to be associated with the correspondence of the site with water sign Scorpio. The reflex in Scorpio to create the perfection of an image should be considered as a central motif behind the whole project. Compare my article: Scorpio as the sign  of sculpting.

The second coordinate lies in solid fixed earth sign Taurus the sign of the earth, grounding, growing roots, agricultural land, market places and local energetic centers. The dome as a female form in architecture is a highly typical element to be related with the apects of the female in earth sign Taurus (compare: Hagia Sophia as a temple for the eart mother). Highly fertile Taurus  indicates an expensive ground reflecting the high importance and costs of the project. And Taurus is also the indicator for the enormous profits that the Taj Mahal attracts to the City of Agra and its inhabitants until today.

Mumtaz had been born with the sun right in the center of Taurus. This resonance between Mumtaz and the construction site puts her and not Shah Jahan in the center of focus at the Taj Mahal .

When contemplating the design of the building and its white colour it is fascinating to consider that in astrology the combination of Taurus with Scorpio is associated with the image of meadow mushrooms.

Lilith in Scorpio and the transformation of pain

Taj Mahal is described as a monument for the love of Shah Jahan for Mumtaz. In the emperor`s birth chart the coordinate of the Taj in Scorpio is represented by Lilith in Scorpio. This resonance between the Taj  and Sha Jahan is a plausible indication for a place dedicated to the pain and loss he felt after the death of his wife.  “Transformation of pain” or building a “monument for the lost love” would be plausible formulas for the coincidence of the position of Lilith in Scorpio with the site of the Taj.  The coordinate in Taurus the sign of architecure coincides with Chiron`s position in his birth chart indicating a  well planned, calculated qnd organized reasonable approach to the construction of the Mausoleum Palace.

The Mausoleum of Humayun

The Tomb or Mausoleum of Humayun was built between 1562 and 1570 for the second Mughal Emperor Humayun born on 6 March 1508 in Kabul, Afghanistan.

Astrogeographic position of the Mausoleum of Humayun for morphogenetic field level 3 which describes the atmosphere and energetical topics of the whole area of buildings and gardens: the coordinate for the astrogeographical latitude is located in air sign Libra the sign of harmony, balance, symmetry, beauty, decoration and the ideal of a higher courtly culture. The coordinate for the astrogeographical longitude lies in solid, strict, exclusive, conservative earth sign Capricorn the sign of control, government institutions, laws, rules & regulations and an indication for the function of the palace tomb to demonstrate the appeal to power of the ruling dynasty.

For the resonance of Libra with strictly symmetrical design compare my article: Libra as the sign of symmetry.

The Mausoleum of Sher Shah Suri

The red sandstone Mausoleum of Sher Shah Suri in Sasaram, Bihar, India was built for Emperor Sher Shah Suri, a Pathan who defeated the Mughal Empire and founded the Suri Empire in northern India, Sher Shah Suri died in an accidental gunpowder explosion in the fort of Kalinjar on 13 May 1545 AD. The 46 m tall mausoleum was built in 1549.

Astrogeographic position of the Mausoleum of Sher Sha Suri for morphogenetic field level 3 which describes the atmosphere and energetical topics of the whole of the pond an park area: one coordinate is located in air sign Libra sign of sign-posts, information, communication and learning indicating the function of the monument as a key to historical information. The 2nd coordinate is located between earth sign Virgo sign of protected places and resonator for the position in the center of an artificial pond that protects the tomb and aristocratic air sign Libra sign of harmony, balance, decoration and symmetry. Libra is so typical for the aim of a symmetrical design – although this was apparently not fully achieved here.

Another important example for the position inside of a central building on a small island inside of a tank is the Golden Temple in Amritsar.