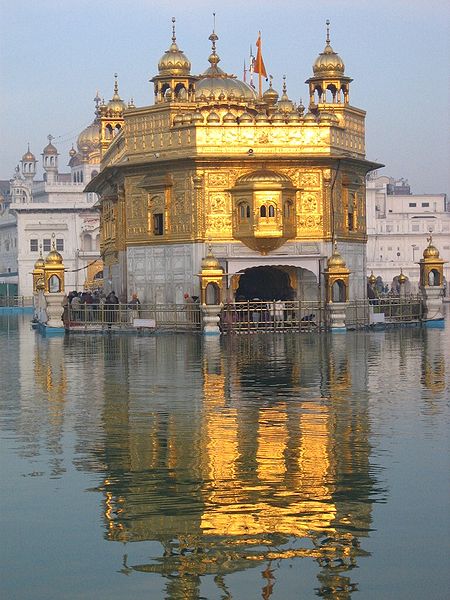 Leo and Virgo – The Golden Temple in Amritsar. Astrology & Sacred Sites: the astrogeographic position of the most important temple of Sikhism.

Compare: Samye Gompa, Jokhang Temple in Lhasa, The combination of Virgo with Leo at it´s best, The magnificence of Leo at Florence Cathedral, The centralism of Leo combined with the mystification in Pisces, The assassination of Indira Gandhi in “Astrogeographical position of New Delhi”.

Built around a man-made pool completed in 1577 the Golden Temple (Harmandir Sahib –“The abode of God” ) in Amritsar, Punjab is the most important shrine and the heart and center of the religious community of the Sikh religion. Sikhism was founded by Guru Nanak Dev an important reformer and spiritual teacher who lived between 1469 – 1539.  Guru Nanak taught an inter-religious mysticism, rejected the Indian caste system and taught that religious ritualism is an obstacle to authentic religion.

The main shrine of the Golden Temple is located in the center of the larger temple area in the middle of a water reservoir the so called “Nectar (amrit) Lake”. It can be reached by a footbridge which is just a few meters wide. This is important because millions of pilgrims can be expected during major pilgrimage events.

Astrogeographic position for morphogenetic field level 3 which describes the atmosphere and energetical topics of the whole of the temple area, gurudwara and other buildings around it: The temple site is situated in the combination of highly magnetic, centralist, royal fire sign Leo the sign of the sun, light, gold, power plants, sexuality, birth, emotional self-centeredness with self-protective earth sign Virgo the sign of reason, health, yoga culture, monkhood, celibacy, self healing, medical treatment, herbal medicine and the most important astrological resonator for Indian culture. Leo, the astrological allegory of the Sun is reflected by the gold covering of the temple, as gold, the royal metal is regarded as a symbol of the Sun. Virgo stands for the subordination of the single parts of the temple under the requirements of the overall concept and for the fact that access to the main sanctuary is arranged in such a way that the influx of pilgrims can be regulated easily. I consider Virgo as the most important astrological corresponding sign of the hinduistisc culture of India and particularly of Yoga, the science of self cleaning, self healing and self finding. The resonance of the site with Virgo indicates that the Sikh religion is deeply rooted in Yoga culture and also in Hinduism.