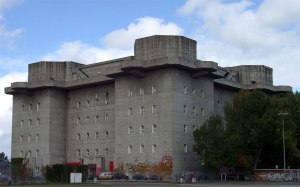 A WW2 flak tower in the sign of crabs. Architecture & Astrology: on the astrgeographical position of a flak bunker tower in Hamburg and the astrogeograpical typology of water sign Cancer.

Related articles: Cancer as the Sign of Seashells in architecture, The Egg on top of Dali´s House – Shapes of Cancer

A WW2 flak tower in the sign of crabs

This WW2 anti aircraft “flak” tower located in the sign of the crab of course can not move like a crab, But its astrogeographical position in Cancer the sign of emotional self-defense, pain and feeling at home is a fascinating analogy for the situation of that creature hiding its sensitivity and vulnerability behind a hard shell and aggressive scissors.

The brutal architecture and atmosphere are not uncommon for water sign Cancer, regardless of what superficial judgement of the imagined reflexes of this sign may say. On the contrary: Cancer fills the building with its emotional potential of pain, fear, dullness, melancholy, digestion, fertility and the focus on the “practical needs” of individual emotionality. It is this reflex from which the fertility of Cancer arises and children grow inside their mothers belly even during the hardest of times. Cancer applies its inner emotional needs onto buildings making it much more independent from outward judgement of form and design than other signs. That accounts especially for Sagittarius the dependent addict of luxurious design and ornament, Libra the sign of prettyness, harmony and naive painting or Capricorn which is so cold all by itself that it might start to freeze from within when exposed to such architecture.

It is this aspect of authenticity in Cancer that makes the sign the condition and true significator of modernity in art and architecture.Just imagine the fears of the local population the women, kids and old people when seeking shelter in these bunkers every night to understand the psychological situation of a sheltered place in water sign Cancer.

The WW2 anti aircraft (“Flak”) tower on Heiligengeistfeld in St. Pauli, Hamburg today hosts a music club named “Übel & Gefährlich” (bad & dangerous) and a . A number of such towers still exist in german cities. Destruction would need largest quantities of TNT and long series of single explosions with high risks for surrounding buildings.

Apart from their function as the defense system against aerial attacks these towers served as superlarge bunkers during the frequent attacks by US and Royal Air Force. Their presence played a psychologically important role for the population as well as for the Nazi propaganda.

Astrogeographic position of the tower and bunker for morphogenetic field level 4 which describes the atmosphere, energetical situation and function of the building: both coordinates of this tower are located in self-protective, emotional water sign Cancer sign of fertility, the moon, mother, uterus, caves, shells, crabs, inner-life, physical emotionality, reconnection of the emotional body with the soul, emotional authenticity, independence & individuality, melancholy & pain.

The small openings on the top of the bunker through which the big guns were operated resemble the eyes of the crab as the place from which the hiding individual seeks to defend its survival. This almost archetypal element can be observed with buildings in Cancer quite often.