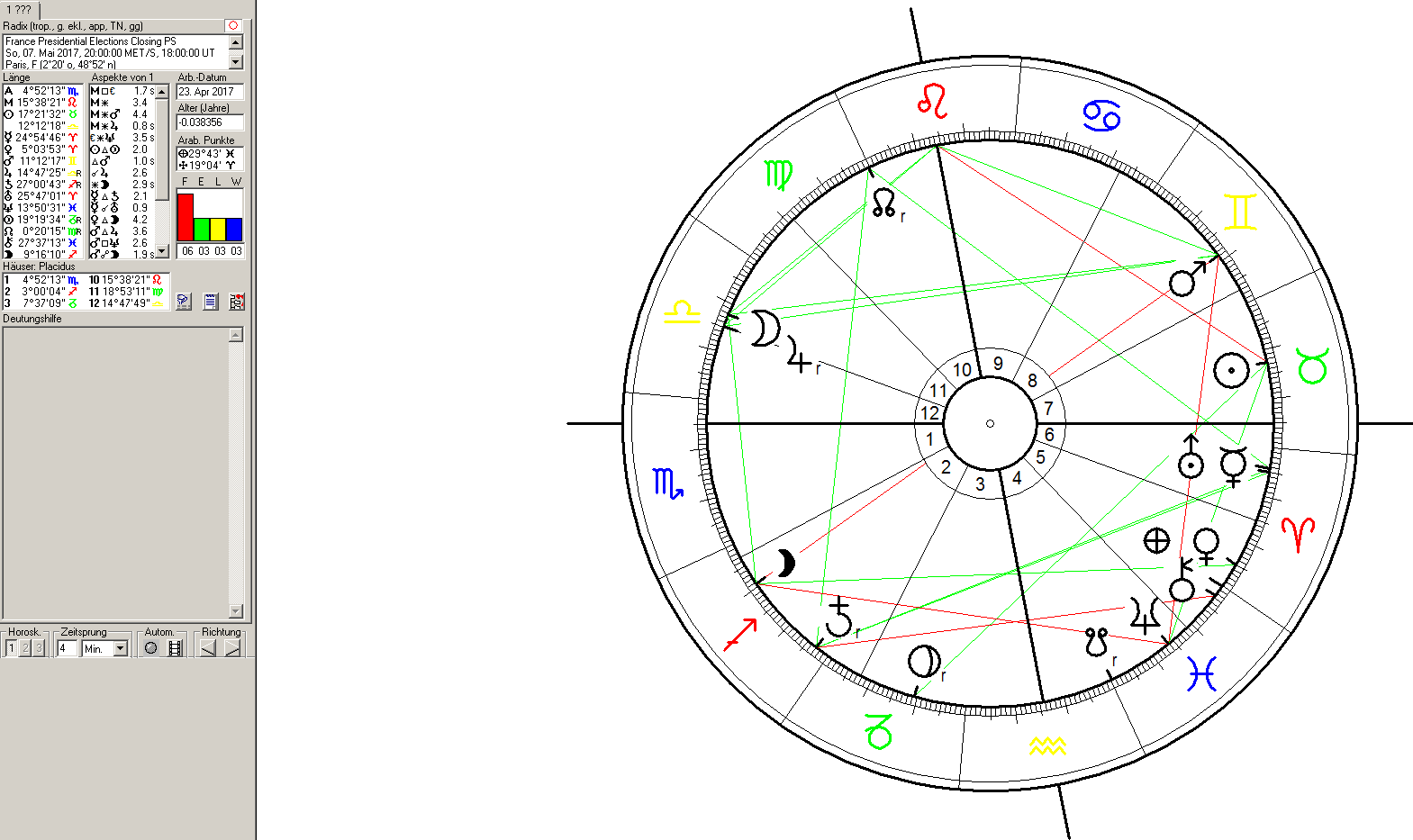 Saturn over Paris – the 2017 presidential elections in France. Mundane and Political Astrology.

Astrogeographic position of the Elysee Presidential Palace in Paris for morphogenetic field level 1 which shows the supraregional and international qualities of the french capital and government: Paris is located at 27° in creative, innovative, rebellious, holistic air sign Aquarius the sign of the sky, abstraction, paradise, revolution, self-finding and reconnection with the fuller amount of human potential and individuality. The astrogeographical latitude coordinate is on 28° of fire sign Sagittarius sign of style, design, fashion, thinking, voyeurism, initiation, luxury and success.

The Saturn – Chiron square of the coming presidential elections on 23 April and 7 May 2017 will be exactly conjunct and square to the astrogeographical position of Paris at 28°Sagittarius. At the same time Saturn will be in opposition to Rome, and square to Berlin and Amsterdam., For an understanding of the potential of that grand cross of the astrogeographic positions of the capitals of the founding members of the EU read my article The Astrological Chart for the EU and its Parliament. That kind of an astrogeographical grand cross with all its complications included appears to be an aspect of the completeness of the European as well as the South American Union. Saturn`s transit should support and profoundly strengthen the role and position of the french government inside the European Union.

Predicting the outcome of the vote is not a really a big deal. Marine Lepen may be able to win the first vote on 23 April with the help of the neofascist propaganda from Washington and Moscow – although I doubt that St. George´s Day is a good omen for her :).  But I`m expecting she will not be able to win the second vote on 7 May 2017 even if more terrorist attacks would be bought by the supporters of neofascism in Europe. But still the neofascist propaganda will leave its imprint on the country and force the new french president to enforce the country`s Saturn through strong measures against the expected floods of uncontrolled migration on a national and even more on an international level. This is of particular importance for France due to the historical role as the former colonial power in the Maghreb countries.

The transit of Saturn conjunct the astrogeographical position of  Paris is to be expected as a stabilizing period for the autonomy of Paris during the current phase of history. This accounts for the topics of independence from the EU as well as from the heavy pressure from the new US government and its propaganda machine:  the Dugin, Bannon neofascist alliance. The fact that it indicates intense pressure exerted from Paris onto the Grand Cross of the governments of the founding members of the EU should not be misunderstood. That pressure and inclusion of contradictory elements is the actual basis of the EU. The Grand Cross includes Amsterdam 28°PIS, Brussels 22°PIS, Rome 29°GEM, Berlin 29°VIR, Paris 28°SAG. This also means that the EU, its institutions and member states need the pressure from the French government during that period.

The leading candidate at the beginning of the elections is Emmanuel Macron who was born with the Sun exactly conjunct the 28°Sagittarius astrogeographical position of Paris.  This aspect could make him an ideal representative of a new era in french politics. Saturn will be conjunct the position of his Sun during the elections. As his supposed ascendant is in Saturn`s own sign Capricorn t this transit is not to be evaluated as challenging to his personality in  the first place. Saturn`s position could make him a representative of the changes needed during Saturns transit over Paris.

Examples for astrogeographical transits of Saturn and outer planets over a capital:

The transit of Saturn over the astrogeographic position of Kiev during the Euromaidan Uprising in December 2013 is an example of the intense potential of the resonance of such Saturn transits. Saturn appeared to stabilize a limited Ukrainian autonomy from Russia but only for a short while. Uranus`s transit in a square and opposition to London which was initiated in the month of the Brexit referendum is an even more intense example for such a tranist but of course with a completely different symbolism and impact. My April 2015 predicition that  the brexit votum would be successful  was based on that astrogeographical data. Read a fuller documentation in my article: The astrogeographic position of London. Neptune`s transit over the position of Berlin at 29° Virgo between October 1940 (27°Virgo) and August 1944 brought the complete destruction and loss of 30 % of the national territory of Germany. The transit of Saturn conjunct the North Node over Berlin in April/May 1945 brought the destruction of german fascism. This example is important of course in relation to the outcome of the french elections for Marine Le Pen.

Rythmical activations in the Birth Chart of the 5th French Republic

Duriing the 2017 presidential elections the progress of the 7 year/per house rythmical activiation will reach 24° Libra. The next direct activation of planetary factors will be due in October 2017 when Rahu the North Node of the Moon located at 22°Libra will be directly activated and in October 2019 when the Sun-Mercury conjunction will be triggered.

The North Node stands for the karmic aim of an organisation at the time of its foundation. Therefore its activation in October of this year (2017) marks a climax point for the realization of the intentions of the founders of the 5th Republic. To a large extent it can be assumed that the  North Node in House 4 stands for the topics and aims reflected by the position of Venus which is the sign and house ruler of all planets in Libra here. The rythmical activation of the North Node in October 2017 will be accompanied by Jupiter´s transit over that position.

As transiting Jupiter in his 12-year cycle will be exactly moving over that position in the autumn of 2017 a larger step ahead in the process of development of french independence, economical self-sufficiency and growth could be achieved in October 2017 through the changes brought forward by the new president. This also means that the new french presidency has a highly prosperous and comfortable outlook compared to the extremely problematic phase in french history which Francois Hollande had to shoulder.

The rythmical triggering of Neptune is known as the weakest point for the subjective experience of a person or country in any birth chart. But the depression we go through during Neptuine transits or rythmical triggering of Neptune stands for the discharge of accumulated karma and blocks of development. We have to consider that the weakest point of french history in the 1958 Natal Chart has to deal with the problems derived from the colonial history and the overmigration from the Maghreb countries into France which the french government at the time allowed as a compensation of the crimes and exploitation committed during the colonial era.

The terrorist attacks during the rythmical activation of Neptune in 2015 therefore sort of served to help the country get over its colonial history and at least to some extent let go of that burden of history. This means that France went through a process of emancipation from its colonies due to the rythmical activation of the effects of the Neptune-Jupiter conjunction. That makes sense also because the fascistoid ideology behind the terrorist attacks used the french military involvement in the Syrian War as an alibi for their own degenerate philosphy of pseudo-religious terrorism.

France is the most attractive country on the planet: The  1958 Birth Chart for France

Venus in Libra on the IC has 5 major indications:  it shows France as the country of love and beauty, makes it the most attractive country in the world, indicates concentrating on the home land during the process of giving up the colonies,  makes it the country with the highest birth rate in Europe and it stands for a mentality which leaves the country`s gates wide open.

Today the most commonly used astrological birth chart for France is the Foundation Chart for the 5th French Republic on 5 October 1958 with ascendant in Cancer the sign of an emotional gathering and indicator for the celtic roots of frenche culture and the Sun in Libra the sign of openness, peace, harmony, balance, relationship, love, beauty.

This Libra influence is further strengthened by the position of Venus at 1° Libra and exactly conjunct the IC.  The IC is the “Inner Heaven” and cusp of the house of emotional roots, identity and individuality.  The position of Venus in her own sign Libra on this  important part of a natal chart indicates emotional self-centeredness, love and relationship orientation,  the home of angels, fertility and pregnancy. This superfine, nice, comfortable, profitability orientated, peceful and beautiful position of Venus conjunct the IC is really remarkable for a national chart.

But Venus has a second role too: the rulership over Taurus the sign of conquering territory.  During the foundation of the 5th french republic in 1958 and the process of giving up the french colonies Venus position on the IC stood fro retreating to the country`s own home.Thus venus in Libra stood for the step of the reduction of French territory through giving up the colonies and in a highly positive sense also for conquering one`s own territory instead.

Venus`s position on the IC reflects the unequalled gravitation, magnetism and attractivity of France as the World´s Top Tourist destination which makes it the most attractive country in the world.

And this highly fertile position of Venus in the house of pregnancy is rounded up by Jupiter at 5° Scorpio near the cusp of house 5 the house of sexuality, emotional self-expression, individual royalty and birth. This really remarkable constellation of the cultural tradition of intense and free sexuality is also reflected in the fact that France has by far the highest birth rate among all european countries.

The ascendant in Cancer indicates the topics of a process of emotional individuality, authenticity, self-finding and the liberation from emotional dependence. The Moon as the ruling planet was in house 12 the house of spiritual identity indicating the readiness to let go of the colonies and go through a process of self-cleaning and self-healing in order to reduce dependence from foreign control over one`s own identity. really a remarkably spirituality orientated constellation for a country`s constitution.  Cancer relates to the celtic roots of french culture.  The aspect of the romanic roots are smbolized by Uranus in Leo which is the most important astrological resonator for France as a nation.

As can be seen the Moon was conjunct the astrogeographic position of Rome at 28° Gemini also in the sign of US culture and in house 12 the house of spirituality was in exact opposition to the astrogeographical coordinate of Paris at 28° Sagittarius. As the Moon is the ruler of the ascendant and therefore most important indicator for the purpose of that position is a clear hint at the intense relationship between Paris, the EU and USA.

Uranus in Leo the sign of french culture and in house 2 the house of economics stands for the strong position of workers and the long tradition of self.liberation, revolution, trade unions, strikes, awareness about the mechanisms of capitalism among the population and socialism in general. As house 2 represents the house of one´s own territory Uranus also stands for the perspective of dealing with an integral, holistic vision of building up an ideal world on one´s own land.