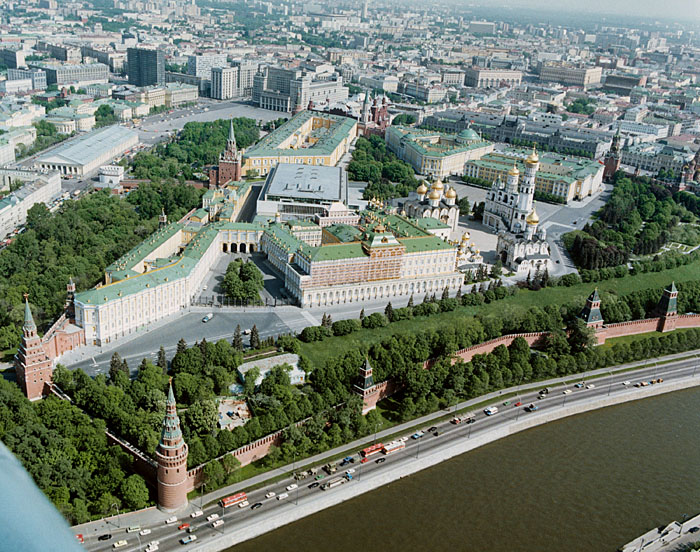 Libra and Capricorn – The Moscow Kremlin in astrogeography. Astrology, architecture and politics: the astrogeographical position of the seat of the central government of Russia in Moscow.

Compare: Astrogeography and Future Transits for Moscow, Libra as the sign of symmetry, 10 Downing Street in Libra with Capricorn,

Libra and Capricorn – The Moscow Kremlin

Borovitsky Hill (Kremlin Hill) represents the origin of the City of Moscow which was later built around it. A first “gord” or “grad” (fortified structure) overlooking the site where the Neglinnaya River flowed into the Moskva River is assumed to have been built here in the 11th century by the Vyatichi. The name of Moscow was first mentioned in 1147 and the first wooden Kremlin defense built around 1156.

Between 1366–1368 Dmitri Donskoi replaced an oak wall structure erected in 1339 with a strong citadel of white limestone on the basic foundations of the existing walls.

In Soviet times the Senate Palace in the Moscow Kremlin was the seat of the Council of Ministers and thus the seat of government of the USSR. It is now the official residence of the Russian Presidents. Although the leaders of the Russian revolution have resided here the character of the Kremlin which was built between 1485-1499 is one of a relic of the tsarist era.

Astrogeographic position for morphogenetic field level 3 which describes the energetical topics of the whole of the Kremlin and how the site is embedded in the City of Moscow:  the Kremlin is situated in the combination of service-orientated, aristocratic air sign Libra sign of harmony, balance, justice, peace, angels, beauty, decoration, relationship and courtly culture. Libra appears as a highly important aspect for the places of rulership in Russia – possibly as a complementary aspect to its otherwise deeply rural structures. It is remarkable that the Peter and Paul fortress in St. Petersburg too was built in air sign Libra (with Virgo) The Winter Palace in St. Petersburg even has both astrogeographical coordinates in Libra.

As the sign of angels Libra – at least to some extent – indicates an overall peaceful nature, although in the Kremlin just like in the White House more than enough warmongers have resided too. But still Libra stands for a relatively peaceful approach to politics and the ideal of a courtly, aristocratic appeal to a higher culture. As the sign of stage performance Libra supports the presentation of events and of politicians and also the reception of visitors.

Libra appears to be absolutely symptomatic for the astrogeographical position of seats of government in a large number of countries for morphogenetic field level 3:

The second coordinate  of the Kremlin lies in highly defensive, strict, exclusive, conservative earth sign Capricorn the sign of governments, administration, government institutions, control, efficiency, realism, state cult, rules and regulations, written laws, walls, impediments emphasizes the character of the Kremlin of a stronghold. In regard to the topographical situation it stands for the slightly elevated position of the Kremlin which is located on a 25 m high hill. Capricorn supports the authority and efficiency of the government, but restricts the appeal for openness and courtly luxury often intended by Libra.

The morbidity of the Libra with Capricorn combination

The weaknesses of the combination of Capricorn (public space, control, exclusion, denial, government, admínistration) with Libra (aristocratic courts, stage presentation, openness) lie in the square aspect between the 2 signs marking situations and even patterns of confrontation, competition, tension and stress.

As the sign of openness and of opening up air sign Libra is programmed for conflicts with the role of Capricorn to separate, exclude, impede, control, close and stabilize hierarchy. It can be speculated how the angelic impact of Libras confidence in the aristocracy of naive painting, justice, beauty and of one being helping another is straight-forwardly denied, controlled and fought back by Capricorns appeal to qualify for the competence of control.

Both signs have their own particular tendency for formalism. While in air sign Libra this is because of the reflex to strife to qualify for aristocracy and the upper social classes through formal beauty, cultural knowledge, sexual services and openness in Capricorn it is through serving the rulers, commanders, elders and leading representatives of society.

I suggest that these problematic issues of the Moscow Kremlin should be investigated as an energetical root of the long history and tradition of super-paranoia which had its historical climax periods during the eras of Ivan IV “The Terrible” (1530-1584) and the “Red Tsar and Terror Era” of Stalins autocracy (1925-1954).

Lenin`s and Stalin´s Tombs as a contamination and heavy burden for Russian governments, politics and culture

Today I found a note written by a famous Russian astrologer who said that while studying the energetical situation inside the Lenin Mausoleum in Moscow he found that his personal impression was that the place was “A Portal to Hell”.

Thinking about that I assumed that Lenin`s Mausoleum is the place where Lenin`s eternal soul connects with the physical remains and memories of his incarnation as the leader of the Bolshevist “Red Terror” and as the responsible founder of the pseudo-socialist regime (since 7 November 1917).

So I calculated the astrogeographical resonance coordinates of the site in order to investigate what type of hell can be concluded to unfold at Wladimir Iljitsch Uljanow`s aka Lenin`s grave and “Samadhi” aka the site of contact between his eternal soul and earthly memories.

Inside Lenin`s Mausoleum the preserved body of Lenin has been on public display since shortly after his death in 1924, with rare exceptions in wartime. And against Lenin`s own and his family`s will!!!. A group of scientists have been permanently employed to conserve Lenin`s body ever since his death and until today. Initiatives aimed at giving final rest and peace to the remains of Lenin`s body, soul and spirit were not successful – even until today.

Shortly after his death in 1953 dead body of Josef Stalin the lord of the super paranoia and mass murder during the infamous period of the “Great Purge” between 1934 and 1938 too was embalmed and decoratively displayed inside Lenin`s Mausoleum . In 1961 Stalins remains were removed and his ashes buried behind the Lenin memorial and next to the Kremlin Wall.

In particular what has to be investigated at this site are Lenin`s karmic issues with and his individual responsibility for the extreme brutality of the mass slaughter exerted by the Bolshevist revolution from October 1918 and until Lenin`s early death 4 years later on 21 Jan 1923. And along with that heavy karmic burden of Lenin`s individual responsibility for the conversion of the pseudo-socialist ideals into the ideal of a reign of absolute terror through his Bolshevist ideology and Lenins direct follower Josef Stalin on the throne of dictatorship in Moscow.

And the same accounts for the connection of the site with the burdens related to Josef Stalin`s eternal soul and spirit along with the information that it was Stalin who supported Hitlers move to start World War II and spread hate, holocaust and destruction all across the European continent in September 1939. Overwriting Stalins role as a supporter of Hitler turned out fatal for millions and millions of Soviet citizens.

All this is important again today as the karmic issues of Lenin`s and Stalin`s regimes of anti-human rights ideology, mass murder, fear, suppression, paranoia, psychological warfare, pseudo-socialism and terror are revived in the name of “New Reign of Terror” through the Putin regime.

Gemini plus Pisces as a core issue of the mental, informational, and political paralysis of the Russian people through psychological warfare, mental infiltration and hypnosis and the spiritual and moral decline of the Russian nation, spirit and soul.

The astrogeographical resonance coordinates of Lenins grave are located in a square to each other on the first degrees of Gemini and the first degrees of Pisces. The square angle between the 2 single resonance coordinates of the site explains a situation of tension and dealing with conflicting issues.As the sign of sign-posts, communication, information and teaching, Gemini is the major indicator of the function of monuments and symbols to pass and represents information. Because it is Gemini`s central function and aim to deal with and make practical use of information as factual reality the greatest crisis that can arise for Gemini is the insecurity about the validity of information dealt with. Nevertheless Gemini stands for schools and in the case of the position of the Lenin Mausoleum it stands for its function as a monument to teaching history.

Pisces on the other hand represents the sign of the invisible, unconscious, unknown, imagination, illusion, dream and sleep states, letting go of control and of consuming the mystification of information and of imaginary aspects of perceived reality. The combination of Pisces with Gemini and of their sign rulers Neptune and Mercury is know for its tendency of stimulating confusion, deafness, blindness, nausea, lying, cheating, and the hiding of criminal deeds. In regard to the extremely successful role of psychological warfare in the history of the Russian nation in the 20th and 21st century.

For investigation and evaluation of the energetical situation it has to be understood the the Kremlin Walls are decorated and ornamented with the graves of national heroes from Bolshevist history since 1917.

This girdle is called the Kremlin Wall Necropolis. But mind the difference between the Kremlin necropolis and the Egyptian pyramids, where spiritual protection of the dead rulers has been a major issue, whereas the heavy burden of pseudo-socialist mentality that appears to dominate the self-image of Russian glory, success and heroism reduced to Stalinism, Leninism and its modern form in Putinist Neo-Fascism neglect the values of spirituality and the help against evil spirits.

On an energetical level this means that the central seat of the government of Russia is surrounded and en-walled by the remains of the unsolved karmic issues of its own pseudo-socialist super-colonialist history.

The Kremlin Necropolis of graves exclusively from the socialist era appears dedicated to forming a girdle of decoration to surround the seat of the central government of Russia like a morbid garland of exclusive super-heroes that reduces Russia to the “Who is Who of the 20th century”. There appears to be no recapitulation of the spiritual dimension of such graves being unprotected by any religious attempt to heal their memory or how that energy encircles and traps the Russian government and political culture. And of Russia being trapped in the paranoia kept alive here by the pseudo-socialist solidarity of the remaining memories and karmic issues of the living dead. And how come that the Russian governments do not recapitulate that, how and which holistic roots of the Russian Nation may be excluded from access to the Moscow Kremlin by such a girdle of pseudo-socialism ? And how he start of Putins dictatorship and even more since the Ukrainian revolution of 2014 appears to have been converted into the interpretation as the Kremlin as the global heart of nation-socialism.

I have to say that considering this central installation of degeneration and morbidity of Russian political, social and spiritual culture makes me think and cry about the energetical impact of Moscow`s problems here in Berlin. It sends shivers down my spine, when I look into the disastrous blocks of flows of living energies in Berlin as at least to a larger extent an effect of the remains of the psychology of the Soviet built Berlin Wall.

The Berlin Wall was built to stabilize Moscow`s colonial rule over Germany under the alibi of protecting the Russian pseudo-socialist system. Among its effects were: