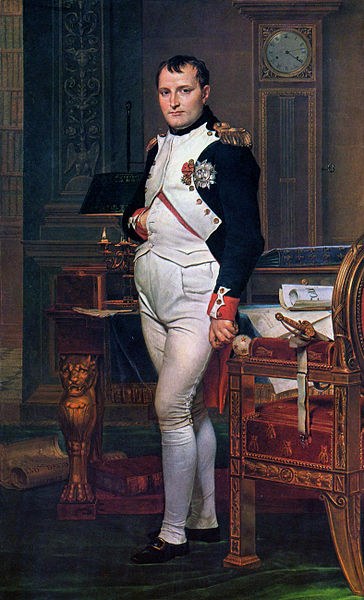 Napoleon`s Astrogeography at Waterloo and Austerlitz. The birth chart of napoleon compared to the astogeographical positions of his battlefields.

Napoleon, Tsar Alexander I. and Francis II. at Austerlitz

One of Napoleon`s greatest victories was the Battle of Austerlitz suotheast to the City of Brno (today: Czech Republic) on December 2 1805. At Austerlitz Napoleons armies defeated an alliance of Russia under Tsar Alexander I. and Austria under Emperor Francis II.

Astrogeographical positions of Austerlitz for morphogenetic field level 1 which explains the global significance of the battle: Austerlitz has one coordinate at 22°Leo and the 2nd at 21°Sagittarius.

The area at the Pratzeberg where the battle took place has both coordinates in fire sign of Sagittarius (fl 2) the sign of hunting, aiming, shooting, horses, travelling in circles and of expansion and victory. This applies to morphogenetic field level 2 which describes the qualities of the area on a level fields of the size of app. 12 x 18 km.

In Napoleon`s sunrise birth chart Sagittarius occupied the 4th and 5th houses, the houses of ones own emotional sphere and homeland (house 4) as well as ones own playground and kingdom (house 5).

In the birth chart of the second emperor on the battlefield the Russian Tsar Alexander I Sagittarius occupied the 10th house indicating public obligations and a situation of having to fulfill the requirements of the environment and challenges provided by superiors. As the 10th house stands for public territory the effort of attempting to control the situation and fulfilling ones duties may have required more attention than the chances to occupy and dominate territory.

As the ruler of house 10 Jupiter on the degrees of royalty in house 7 stood for living up to ones prestige as an emperor rather than for being able to mobilize on ones own strengths and potentials.

Th astrogeographical resonance coordinates of the battle ground of Austerlitz in Sagittarius stimulated houses 11 and 12 in Francis II. birth chart indicating a situation of retreat an finding it difficult ground oneself and ones personal rights, defense and appeal for power. As a consequence of his defeat at Austerlitz Francis II. had to step down as Holy Roman Emperor and even dissolve the Empire to prevent Napoleon from taking over the title for himself.

Napoleon, Wellington and Blücher at Waterloo

The last major battle in the life of Napoleon Bonaparte took place on 18 June 1815 in the small village of Waterloo located 18 km south of the town center of Brussels, Belgium.

Astrogeographical positions of Waterloo for morphogenetic field level 1 which explains the global significance of the battle:one resonance coordinate is located at 23° Pisces the 2nd is at 14°Scorpio.

Astrogeographical position for morphogenetic field level 2 (city): The area of the battle ground around Waterloo is located in the sign combination of the two earth signs Virgo and Capricorn. This applies to morphogenetic field level 2 indicating the character and meaning of a town or community for the larger region in which it lies. It describes the qualities of the area on a level fields of the size of app. 12 x 18 km

Virgo stimulated houses 1 and 2 in Napoleons` birth chart representing a situation of personal dominance and ruling by ones own will power. The conjunction of Mars the planet of warfare with Neptune the planet of the higher self, intuition and a holistic approach which seems to have made Napoleon so intensely fast, flexible, intuitive and successful in his campaigns was therefore stimulated by the qualities of the battleground.

But unfortunately for Napoleon the position of the British troops under Lord Wellington in the north of the battlefield was situated around 10° in Virgo where in Napoleon`s birth chart Neptune and Mars were placed. This indicates that Wellington occupied the individual position of Mars in the commander of the French troops birth chart apparently weakening Napoleons standing on the battleground.

In the horoscope of General Wellington, the commander of the British troops Capricorn occupied and stimulated the 1st and Virgo the 8th House. This constellation like no other stands for a situation of increased alertness, readiness for defense and facing death (house 8) under intense pressure as in the case of a fortress, bunker or any other military defense position.

Particularly the 8th house could be an explanation of how the British troops fell under heavy fire and cavalry charges suffering heavy losses from the beginning of the battle. The fact that Wellington’s troops occupied the line where Neptune in Virgo was placed in his birth chart may explain that the British troops were fully committed to this line all day long being unable to leave it and could make no territorial gains waiting for the arrival of the allied Prussians on the battlefield in the afternoon.

The Capricorn resonance coordinate of the battleground occupied parts of houses 1 and 2 in Blüchers sunrise birth chart stimulating self reliance and the assurance of territorial dominance and possession.

Furthermore Blücher had a conjunction of Mars with Saturn and also Jupiter in Virgo around the 10°Virgo resonance coordinate of the positions of Wellington. These planets occupied house 9 in Blüchers sun-position birth chart stimulating hunting, aiming, shooting and heading for a particular aim or target. This gives a strong image of the fact that it must have been Blüchers aim (house 9) to get nearer to Wellingtons position in order to relieve his ally from a day-long of heaviest attacks by the Napoleonic forces.