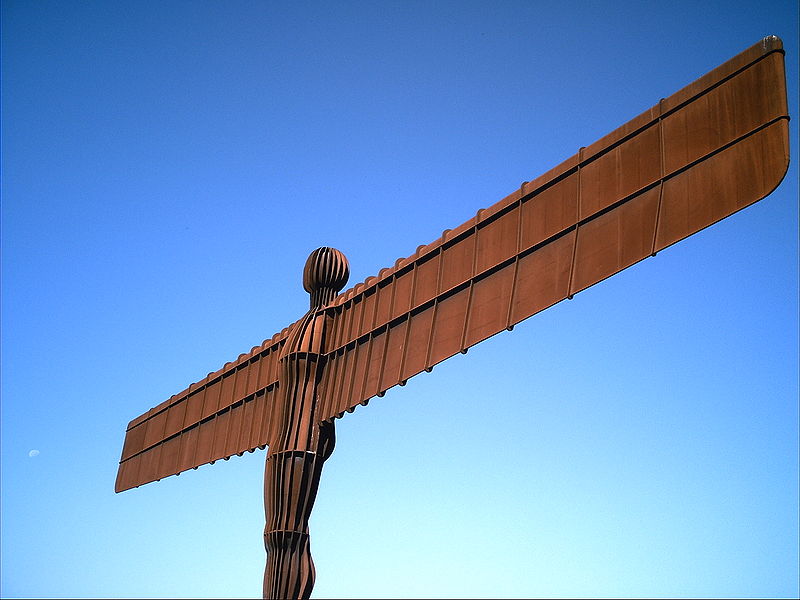 Related articles: Aspects of the combination of Capricorn with Cancer, Sculptures in astrogeography, Aquarius and Libra – the B of the Bang sculpture, The Alice Through the Looking Glass sculpture in Aquarius, Lying or Flying – The Leaning Tower of Pisa, The 2 spirals wedding chapel in Aquarius, The Knotted Gun Sculpture in Libra with Virgo, The Greenpeace Headquarters in Amsterdam.

Virgo and Aquarius: The Angel of the North sculpture

The sculpture called Angel of the North was created as a symbol of the era of coal mining and steel production in the region of Newcastle in North England. It is made of 200 tons of steel and is about 20 metres tall with wings measuring 54 metres. The Angel of the North was set up on a small hill near the town of Gateshead. Construction work was finished on 16 February 1998.

Astrogeographical position of the sculpture for morphogenetic field level 4 which describes the atmosphere and energetical topics of the site itself: the construction site is located in self-protective earth sign Virgo the sign of reason, self-healing, medicine, curation, monk-hood, yoga-culture, protected places, protection of nature, plants and spiritual entities of nature such as elves and dwarfs. The 2nd resonance coordinate lies in creative, innovative, spiritual air sign Aquarius the sign of the sky, heaven, paradise, flying, airplanes abstraction, self-finding and re-connection with the fuller potentials of beings.

There may be of course angels for every astrological sign and aspect. But because they are  not as dense as physically visible “material” beings their spheres should be understood through the air signs in the first place. The position in Aquarius can be understood as the topic of a resonance with archangels here. And as the fixed sign in the center of winter Aquarius is a clear association with the artist`s reflex to name and create the statue under the title of an “Angel of the North” here.

Aquarius` role as the sign of flying relates to the fact that the wings are the most important because largest element of the sculpture. As one of the fixed signs it also stands for the statue`s largeness here. Other elements of Aquarius here are the erect body, its nakedness and the anonymity or abstraction of its face and expression.
Fixed air sign Aquarius is the sign of the center of winter. Among the four bodies of humans (mat.,emot.,ment.,spirit.) in astrological structuralism – it stands for the North and thus for the spiritual body.

The wings as being rectangular and not feathered do not represent a pure abstraction of the concept of angels but rather a kind of funny allusion to aeroplanes at a totem pole. The wings of the sculpture are not designed as if it were ready for taking off, but rather as a display of its potential. Each of the two wings is longer than the statue`s height.

There is of course also the implication of the cross and of a man or mankind being tied to a totem pole.

Virgo is the sign of the dwarfs and also of all mining professions. Therefore it is a clear reference here to one of the central topics of the sculpture`s concept : to reflect and to remind people of the important history of mining and steel production in this region. Virgo does not stand for the topic of an angel, which would be an aspect of the air signs particularly Libra. But through its strong resonance with spiritual entities of plants and nature Virgo relates the site to the topics of protection of nature.

Among the 3 earth signs Taurus (water of the earth), Virgo (air of the earth) and Capricorn (fire of the earth), Virgo relates to sitting and waiting positions and also to fear of not being grounded and therefore of flying. Aquarius on the other hand represents the longing for the sky and the urge to get away from “over-groundedness” (and gravitation). It so stands for the upright position of the being and the spreading of its wings. The sculpture so represents a state in between the fear of being grounded and the urge to fly.

Through its direct resonance with yoga culture the position in Virgo can be interpreted as an indication of the sculptures posture as a Hatha Yoga Asana – compare these standing positions.

There is only one trace of movement in the sculpture`s pose: the wings are outstretched but very slightly bent forward. This movement indicates releasing tension and relaxation and not so much trying to fly. This means that the sculptured being is in the act of focusing on grounding the presence of its enormous power to fly.

On the day of the completion of work on the sculpture there were 4 planets in Aquarius including the Sun and Mercury bringing light onto the place. No planet was in Virgo, but Mars and Jupiter in Pisces the opposite sign of Virgo so putting in question old habits and routines. The Moon was in Libra the sign of the angels.

Related articles: Chichén Itzá, Hallgrims Church, B of the Bang, Spire of Dublin

The parallels between the Angel of the North sculpture and the Monument to the Revolution of the People of Moslavina during World War II, at Podgaric, Croatia are remarkable. The gigantic wings – symbols of freedom and the potential to fly – rest on a central corpus.