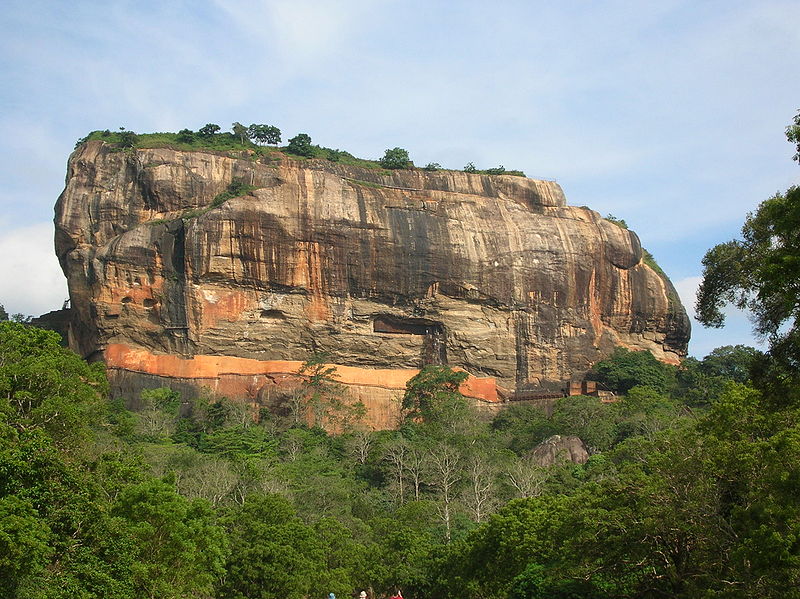 Scorpio and Scorpio – The Rock Fortress of Sigiriya. Astrology, architecture, history, mythology: the fortress of the demon king Ravana.

Related articles: Acoma Pueblo as an example for a stronghold in Scorpio,  Checkerboard Mesa & Angels` Landing in Scorpio with Gemini,  The Cliffs of Moher in astrogeography, Crazy Horse Memorial ,  Scorpio as the sign of sculpting

Sigiriya, the Lion`s Rock was a fortress supposedly built by king Kashyapa I. of Anuradhapura during the last decades of the 5th century AD in Sri Lanka. He moved the capital of this kingdom from Anuradhapura to the fortress at Sigiriya. Sigiriya is also interpreted to be the capital of the demon king Ravana from the indian epos Ramayana.
The Rock is only 200 m long and both of its coordinates are in the water sign of Scorpio, the sign of traumata, death and the underworld which is astrologically related to the spheres of demons. The Bṛhat Parāśara Horāśāstra names Scorpio as a sign of tamoguna the rakshas or demon quality.  Scorpio stands for the defensive, fortresslike character of places and architecture and is a definite indicator for the fortress character here. This constellation is valid for morphogentic field level 3, which describes how a places is embedded into the surrounding area.

The so called Lion`s Gate or Mouth at Sigiriya (the Lion`s Fortress) had been built to defend the entrance of the only pathway that leads to the top of the rock. It has eroded almost completely and only the gigantic claws carved into the rock remain.
The lion may be thought of as an indication for the sign of Leo here. But I have frequently found lion statues or images as guardians in places located in Scorpio in my astrological geomantic field studies. It seems to be a typical aspect of the highly alert and defensive reflexes in Scorpio to have deterrent, fierceful guardian statues particularly lions (and also wolves), but also typical images naturally related to Scorpio´s role as the sign of amphibiae such as dragons (not in chinese culture though) or snakes. The expression of Lion sculptures when they appear in the sign of Leo are usually not presented in their most deterrent forms  as they are in Scorpio but rather as emblematic of royalty, kinghood, centralism, aristocracy or superiority. As Scorpio has the strong reflexes of social group hierarchies it`s relation with Leo the sign of the strongest among animals has a particular focus on features such as dominance, strength,  rulership, danger and superiority.

Another really frequent type of lion sculptures appears in the first degrees of Virgo which is just next to the “entrance” into Leo at 30° Leo or 0° Virgo. You can imagine that this position was really confusing for me when I had little experience with astrogeographic field studies.  I expected that the lion sculpture should be positioned in the sign of Leo and not on the Virgo side of the divide between the two signs.  And I made really long and exhausting attempts to find out what was going on, walking back and forth trying to measure places with my 1 m steps.  A typical feature of lion statues in Virgo is that they are in sitting positions and do not seem threatening but rather decorative in the first place. This aspect of a comparatively tamed lion is one feature for this type of position although these statues do always at least to some extent have the function of guardians.

Fire sign Leo is a clear indicator of predators while earth sign Virgo is and indicator of rodents and even vegetarians. This means that Leo and Virgo relate to each other like cats and mice or in regard to social classification (caste systems) like royals and slaves.  If the lion statues are positioned in such a way that they look from Virgo into Leo they guard the Virgo morphogenetic field from the Leo apects and not the Leo field from the Virgo aspects of course. If they look into the direction of the Virgo field they are guardians of the royalty marking the aristocracy, superiority and centrality of the Leo (capital) morphogenetic field. In both cases the Lions are not designed as frightening like in Scorpio but rather as majestic (Leo) or patient (Virgo).

Lion sculptures can occur in all the astrological signs but their function in other signs as in the described Leo/Virgo and Scorpio topics are rather seconday which means that they are placed for mystification (Pisces), decoration (Libra) or ornamentation (Sagittarius) purposes or sometimes simply to “store old sculptures”.

Scorpio as the sign of stone masonry is the most important aspect of places where statues have been carved out of rocks in situ like in the case of the Mountain Sanctuary of Göbekli Tepe, the Buddhas of Bamyan and the statue of Sri Gomateshvara, Crazy Horse Memorial.