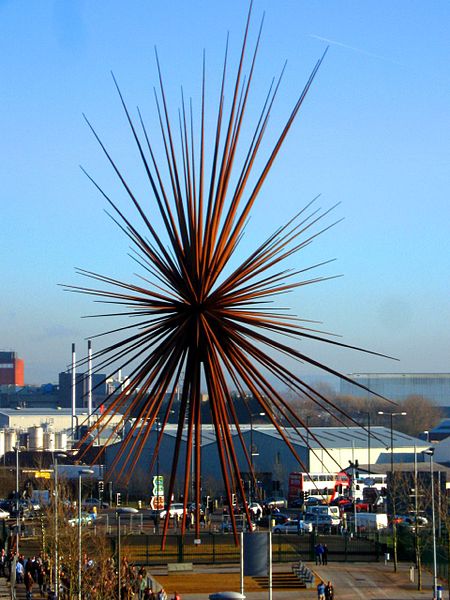 Related articles: Spire of Dublin, Angel of the North, Hallgrims Church, Distortion as an element of style in Aquarius, Lying or Flying – The Controversy between Taurus and Aquarius in Pisa, The artificial Palm Jumeirah island in Aquarius,

“B of the Bang” near the City of Manchester Stadium

This sculpture may not be interesting at first glance and talking about aesthetical evaluation may be useless. But if you take a look at it in the light of its astrogeographical position it becomes a fascinating object of art.

Before doing that I want to say some thing about the punctuation of morphogenetic fields by objects of art. If buildings have an effect on the surroundig areas, their effect can be understood by comparing their form with the astrogeographical position of the site where they are situated. If an object of art would be in harmony with the location the effect could possibly be harmonizing. If it were contradictory to the topic of a location its effect could possibly be disharmonius.
What would a “harmonizing” effect be like? If the morphogenetic connection and interaction of electromagnetic fields would be by the natural flow of energies, that sustains the field and the life in it, a harmonizing effect would be an effect of supporting and not one of blocking the flow of energies.

The “B of the Bang” was a sculpture near the City of Manchester Stadium, that having been unveiled on 12 January 2005 with the Moon in Aquarius and Jupiter in Libra was dismantled due to structural problems in February 2009. It was about 56 metres tall and had 180 hollow steel spikes radiating from its central core. The sculpture was made out of 165 ton of weathering steel, the same material as the Angel of the North.

The sculpture`s position was in the combination of the two air signs Aquarius and Libra. This was valid for the astrogeographic radius level 4 (exact position) which describes the energetical topics of the sculpture itself.

The main features of this sculpture were the stings and not the pole nor the core where the stings all originate and come together. This feature is so typical for the sign of Aquarius that I was really fascinated by the presence of this aspect in this particular sign, when I first calculated the place.

First of all: I used to find the department stores of “Palmers” in Aquarius during astrological geomantic field studies. There is a direct relation of palm trees with Aquarius because these trees have long and narrow trunks without branches and transport all their energies to the top of their bodies as if to concentrate on their highest chakra. The “B of the Bang” statue to some extent follows the shape of a Palm tree – as its core is on the top of the central body or trunk – and because the stings are similar to the leaves of palm trees.

Secondly: Aquarius does not stand for the concentration put on the center of one`s presence but for the reconnection with the full amount of one`s potentials and possibilities in future and past. This is why the core itself is not the center of focus and can not even be seen here, but all the single stings like rays of potential that might and actually do come from the core are on display. This aspect of Aquarius is the main element of the sculpture. It relates to a central motive of Aquarius which is often referred to as the sign of the stars. This equation surely needs to be thought over, because as an air sign Aquarius refers to a space and as the sign of the sky and heavens it is not the sign of the individual Sun which is Leo. In fact Aquarius as the opposite sign of Leo is considered as the sign of the Antisun (Uranus). This means that Aquarius does not stand for the centers (Suns) of the solar systems we see in the sky. This is why it should either be related to other objects in the sky or if examined as an aspect of the Suns it should be clear that Aquarius does not stand for the core but for sending out or transporting impulses from the core by its rays.

Finding any trace of the second astrogeographical aspect (Libra) is not so easy. Particularly the stings as a an element of form that stands for aggression and contradicts harmony can hardly be seen as an element of the sign of Libra. Libra would put the emphasis on trying to bring all elements into a state of harmony, balance and apparent congruence. But the stings of this sculpture put stress on the importance of any single idea or energy coming from the core without allowing to subdue them to the idea of harmony.

Because the sculpture was set up near a football stadium it could of course be interpreted as describing the possible movements of a ball in all the directions. In case the sculpture was meant to show a Big Bang, as the name suggests, it was not meant to display stability but instability or else the stability of instability. In this regard too its position in Aquarius may be evaluated as harmonious. But as it does not contain any clear attempt to harmonize or direct the energies exploding from the core, there is no clear indication of the presence of Libra. It may be regarded as a reflex of Libra that the topics of the sign of Aquarius can be unfolded here without interference. In this case the influence of Libra would simply have been reduced to serving as the stage for the topic of the other coordinate of the site. Besides Libra as the reflex to beautify objects and places could simply be seen to stand for the (naive or not) attempt of placing an object of art here.

Maybe this sculpture could have been a positive punctuation here, if it would have dealt with the problematic situation between Libra and Aquarius, as between the reflex to please and pacify other individuals (Libra) and the urge to individualize oneself without being hindered by others (Aquarius).

The sculptor Thomas Heatherwick was born with the Sun in Aquarius and the sign ruler of Aquarius in Libra.