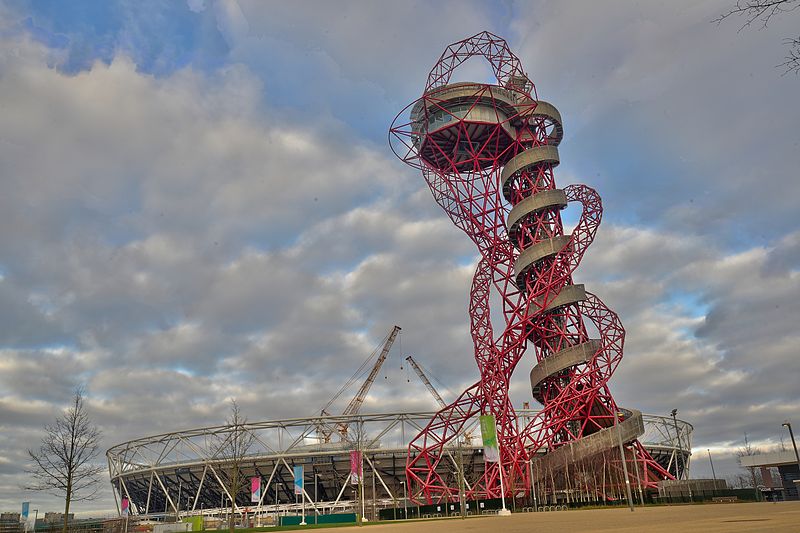 Aspects of the combination of Capricorn with Cancer. Astrology, architecture and art: the design of ArcelorMittal Orbit in London

Related articles: Eiffel Tower and Field of Mars located in Aries, The Crane Hotel in the port of Harlingen, Sculptures in astrogeography, Aquarius and Libra – the B of the Bang sculpture, Virgo and Aquarius: The Angel of the North sculpture, The Crescent Moon Towers in Cancer,

Like all works of art the roller coaster figurine has to be examined as a description of the psychological, economical, cultural and political situation of human individuals in the year of its construction.

Other functions of the sculpture can include those of an acupuncture needle that helps to ground, balance and/or stabilize the flow of energies in the landscape and also the psychological image evoked by the surrounding group of buildings.

The installation of the pathway circling upwards around the center functions as a a canal or antennae that supports the flow of energies upwards and downwards too.

Because of its different form the tower represents an element of form that contrasts the surrounding architecture and can help to channel and ground certain types of flowing or shooting energies that can not be stabilized by the flat buildings in the Olympic Park.

Such energetical problems include effects from the wrong shui (blocks in the flow of natural and/or artificially installed energies, electro-smog, memories stored at the place by former inhabitants or spirits passing by and all types of energies “flippering” between the aggressive modern steel-concrete of the surrounding urban landscapes and underground installations).

The perspective shown in the picture above reveals how the sculpture depicts a standing industrial street lantern figurine living in a “bonjour tristesse design” despite of its being garlanded with red steel navel chords. It shows the depicted imaginary (invisible) individual being encircled by a round silvery staircase like those frequently used to depict phenomena of the rising of genetic spirals. The figurine seems to be busy with the movements of some 4 red roller-coaster like tubes, navel chords, tentacles that appear to shoot out from the ground next to the spiral center of the figurine in order to garland and ornament its situation. Its head resembles a plat form that appears to look down at the ground while being wildly decorated by the efforts of the red steel garland. From other perspectives as in picture 1 its head could be found to resemble the crowned queen.

An asrogeographical comparison with the 324 m tall 19th century Eiffel Tower located on the “Field of Mars” in Paris can help in the astrological comparison. As Eiffel Tower was built in Aries the sign of iron, strength and strongholds it needed or wanted to stand erect and be stretched to its ultimate height reflected. The 21st century “Indian-British Mittal Steel treatment of the skeleton tower motif” combines the 114 m tall erection with the “re-connective installation” of tentacles that serve to ground the electrical and cosmic energies around the central tower.

The function of the sculpture/watchtower/acupuncture installation for the whole of the Olympic Park area may be found in the contrast to the surrounding buildings that it makes.

Aspects of the combination of Capricorn with Cancer

Sometimes the design of architecture and art installed at places seems not to reflect our expectations in regard to the design related to the qualities of the astrological signs of places in systemical astrological measurement of surface fields.

But a deeper investigation can provide insights into aspects of the complexity of zodiac signs (as structural elements of holistic systems) that can allow more stable concepts of the issues, aspects, energetical topics, archetypal roles. In this case the expected signs that describe the steel sculpture could have been:

Astrogeographical position for morphogenetic field level 4 (exact position), which describes the energetical topics and purposes of the sculpture: ArcelorMittal Orbit is located in the combination of 2 opposite signs indicating conflicting and contradictory topics but also the assimilation or amalgamation of polarities through confrontation.

Capricorn resonates with the function of the steel skeleton as to fill an empty space in the landscapes created here as part of a public cause. It is the sign of public space and government related purposes. Capricorn may be understood as a factor that explains the function of the sculpture as to justify the public expenses made to build the Olympic Park.

Capricorn may be understood as a factor that explains the function of the sculpture as to justify the public expenses made to build the Olympic Park. For that purpose a sculpture sponsored by a billionaire serves to explain the function of the display of charity at the top of the capitalist system providing some kind of advertisement both for the City of London and for the investing company.

The 2nd coordinate is located in emotional water sign Cancer sign of fertility, conception, pregnancy, motherhood, the uterus & the fallopian tube, emotional identity and individuality and an important factor in regard to the credibility and emotional authenticity of modern art.

The round forms of the sculpture and particularly the shell-like shape of the visitors platform have to be examined in resonance with the position in female sign Cancer.

The presence of the steel skeleton reminds me of the astrogeographical example of the Crane Hotel in the Port of Harlingen in Cancer with Scorpio which appeared to depict the narrow arms and legs of a crab. In sensitive, emotional sign Cancer the sign of the mucous membranes the presentation of the reduction of the sculpture to its raw and naked skeleton seems to allude to the appeal for emotional stability even in contact with hardships.