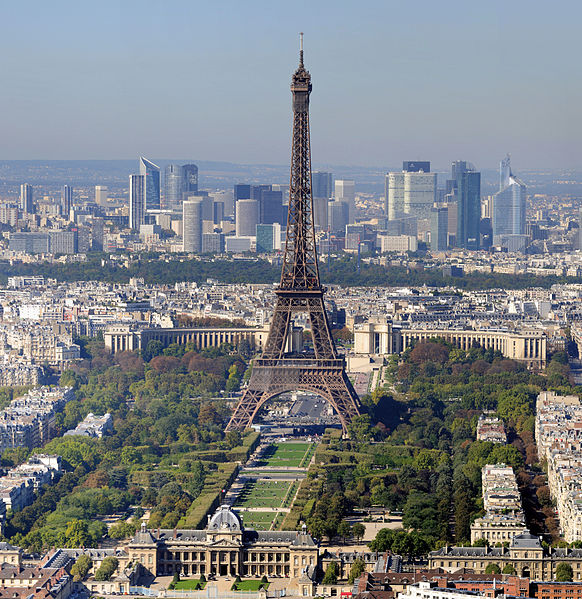 Related posts: Astrogeographic Position of Paris and Future Transits, Astrology & architecture: characteristic features of Aries, Aries as the Sign of Unicellular Structures: Astrodome & Co, Hallgríms Church in Reykjavík, ArcelorMittal Orbit in astrogeography, Aquarius reaching for the sky: the Spire of Dublin, “Tower of Ring” and the punctuation of the landscape, An astrogeographical history of skyscrapers

Eiffel Tower and Field of Mars located in Aries

The Eiffel Tower was built in 1887-1889 for the World Exhibition in Paris in 1889  on the occasion of the centenary of the French Revolution. Eiffel Tower is situated on the Champ de Mars named after the Campus Martius (“Mars Field”) in Rome, a tribute to the Latin name of the Roman God of war. The Champ de Mars is a large public open green space that stretches between Eiffel Tower on the south bank of Seine river and the École Militaire. Since the construction of Ecole Militaire in 1765 the area had served as drilling and marching grounds by the French military. Today Eiffel Tower is 324 m tall.

Astrogeographic position for morphogenetic field level level 3, which describes the atmosphere and energetic topics of the largest part of the Field of Mars here and how it is embedded in the central town area:   in the combination of the highly alert, male, phallic fire sign Aries the sign of fighting for survival, soldiers, rockets, warfare, strength, competition whose ruler is Mars. The principle of Aries is in many ways symptomatic of the Eiffel Tower. First of all as it is constructed from iron, the element which is the main symbol of Aries. Secondly because the image of a single placed phallic form is a basic motif of Aries the first male aspect in astrology. Thirdly because the area of the Champs de Mars is a former training site for soldiers.

The 2nd coordinate is in highly imaginative, relaxed, spiritual water sign Pisces the sign of the letting go, the dream world, illusions, mystification,  legends, fairy tales, entertainment and temples. In case of the Eiffel Tower the position in Pisces stands for the fact that the tower was built without any functional purposes other than the mystification of national glory and as a site for entertainment. And Pisces is also the indicator for the fact that the area where Eiffel Tower was erected is though an inner city place not covered with buildings but an energetically independent open space area dedicated to recreation.

The Opening Ceremony during New Moon in Aries

The astrological chart of the opening ceremony of Eiffel Tower can be examined as an important astrological chart for conclusions on archetypal astrological resonance factors and planetary positions that allow a deeper understanding of the astrology of architecture and buildings along with their functions and reception.

The opening ceremony was held on 31 March 1889 during an exact New Moon (sun/moon conjunction) at 11°Aries conjunct the astrogeographical resonance coordinate of the construction site.

The New Moon of the day occurred under a stabilizing trine to Saturn the indicator of stability, authority, strict controls and even the skeleton like design of the iron tower.

The choice of a New Moon moment with both luminaries in nearly exact trine to Saturn and with Mars on mid-heaven clearly suggests astrological election of the moment of inauguration.

The planet Mars himself as the planetary representative of

took the most prominent position near mid-heaven – the place above the ground explaining the aim of looking up to the sky.

Mars was on the first degree in earth sign Taurus the sign of house construction and the most basic resonance factor for architecture explaining the opening of the first over 300 m tall skyscraper as a first important and lucrative step in the birth of the markets for the architecture of supertall buildings.

Uranus as the god of the sky and indicator of inventions, innovation, futurism, skyscraping and and giganto-mania was in house 3 in a constellation of excited experimenting and seeking to go new ways.

The position of Jupiter in the royalty house 5 and in Capricorn the sign of control, efficiency, reality checks, skeletons, stability and stabilization of society through stete cult and of the ruling social hierarchy stood for the self-esteem demonstrated through controlling the stability of such an innovative building.

Mercury made an aspect of a harmonious and potentially vigilant mirror-point conjunction to the 11°Aries Sun/Moon position from 19° in mystic spiritual water sign Pisces the sign of spirituality, dreaming, imagination, entertainment, illusions and temples explaining the opening ceremony of Eiffel Tower as:

Through his position in Pisces Mercury represented the Pisces atmosphere and energetical topics of the construction site.

Eiffel Tower was erected in the wake of the important because rare (takes place every 494 years) Neptune-Pluto conjunction that was scheduled for 2 August 1891 at 16:36 an on 3°48`in Gemini the sign of technology, information, roads, connecting cultures which can be taking as the starting point of the modern era of technical modernity and constructionism. This aspect makes the Eiffel Tower the ultimate signpost monument building for the new 494 year era to come.

Comparison with the opening charts of the Chrysler & Empire State Buildings

Until the opening of the 319 m tall Chrysler Building on 27 May 1930 Eiffel Tower remained the tallest building worldwide for 41 years. Chrysler Tower had only one year until it was topped by the 381 m tall Empire State Building which was inaugurated on 1 May 1931.