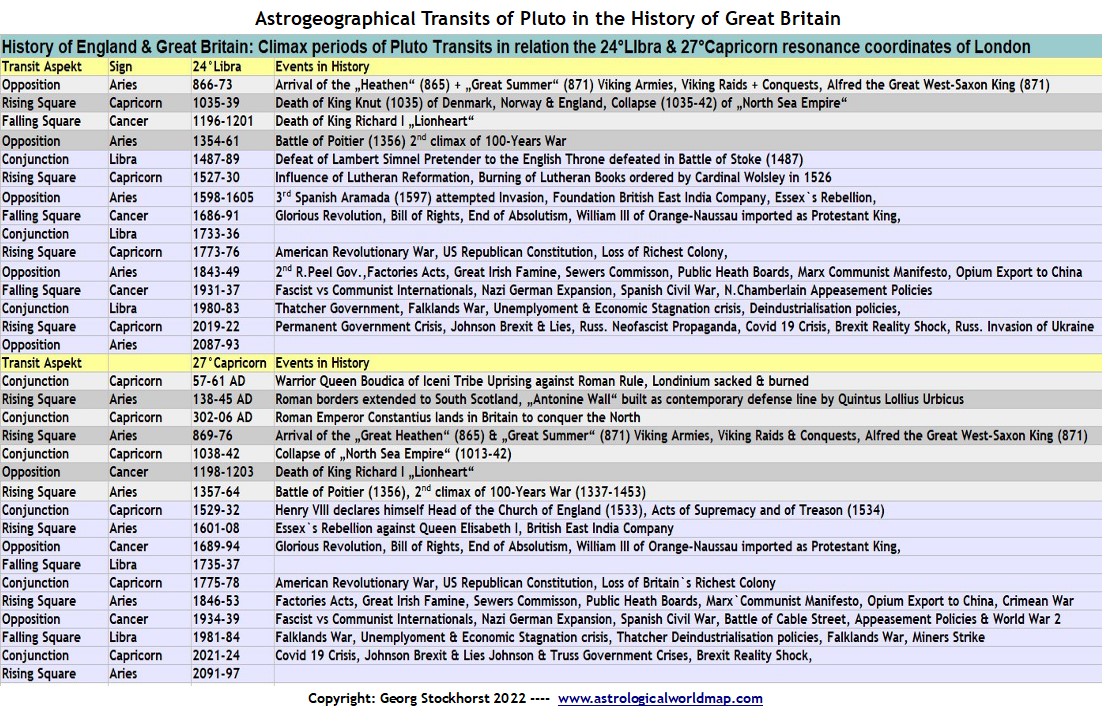 I will be working on this article over the next years – please drop by after some time!!!

Compare: Pluto-Neptune Transit Cycles in Mundane Astrology, The first Pluto Return from the foundation of the USA in astrogeography,

Every nation is unique.

In Mundane Astrology data of the foundation of countries, nations, parliaments and governments and birth data of heads of state are examined as indications of important central issues, time lines of development and all kinds of issues regarding the nations and their territories.

I want to show here how the astrogeographical data from my Astrological World Map calculation  system can be used for a deeper examination of the relationship between transit cycles and the places on earth where events occur. After intense studies and comparisons of the astrogeographical resonance degrees of the places where national capitals are located with events I have come to the conclusions that their positions function as ALL-TIME-CENTERS (over thousands of years) not only of the national politics and governments but also of the morphic fields of the nations. This also includes historical developments long before the foundation of the nation or the capital city.

Transits of the slower moving outer planets (systemical: Pluto, Neptune, Uranus, Chiron, Saturn & “non systemical”: Trans-Neptunian dwarf planets) in relation to the astrogeographical positions of governments can serve to explain historical developments and culminating events in the history of a nation as well as the long-term historical processes changes behind them.

The quality of the transiting planet and the signs can be used for the more advanced and deeper evaluation of the meaning of important events and long-term processes.

Pluto Transits for the United Kingdom of Great Britain

London at 24°Libra and 27°Capricorn

The capital of Great Britain has several unique astrogeographical features.

The comparison between the Russian and British national-transit processes during the 2010s and early 20ies provides some fascinating insights into the recent political developments of the two nations. And how these developments are interrelated.

In his 248 years cycle Pluto in Capricorn currently demands a factual reality check (Capricorn) of the propagated and habitual versions of national state cults and national identity for all nations on the planet. Due to his character as the planet of disappointments Pluto´s transit in Capricorn the sign of factual reality stands for a serious “brain wash” and reality check constellation.

This reality shock constellation appears to be particularly heavy for two former global super-powers who have lost their status but are still carrying the burden of the appeal for supremacy from their historical role: Russia and Great Britain.

Both nations are currently going through a shrinking (Capricorn) process.

During the manifestation of the long awaited Brexit on 31 January 2020 (see table below for the timeline) Uranus the planetary indicator of self-liberation, leaving groups, escaping and of revolution was exactly conjunct the 2°Taurus resonance coordinate of Moscow.

This indicates that Moscow was the driving forces behind the Brexit. explaining the impact of the the Russian secret services psychological warfare on Britains (like US and all European societies) and how strongly the Brexit escape from the EU was driven by the Russian social media motor.

Three sub-periods of this phase can be distinguished:

In my article on the natal charts, history and astrological geography of China I have presented extensive tables with the astrogeographical positions of the ever changing seats of governments and capitals throughout 5000 years of Chinese history. Nevertheless it is the site of the central capital of Beijing that has according to my findings represents the overall center of successful (Sagittarius) centralism (Leo) in the national morphic field of the territories of China.

Beijing at 17°Sagittarius and 3°Leo

The following table is far too small – and an extensive research of astrological and astrogeographical transits in Chinese history still to be done.

The case of “Germany” is unique in several ways:

See my study: The first Pluto Return from the foundation of the USA in astrogeography

I want to draw you attention to the fact that the re exists a parallel between the astrogeographical resonance coordinates of Washington (for North America) at 6°Cancer and 27°Leo with two important capitals in Peru (for South America): the modern capital Lima at 6°Cancer & 19°Capricorn and the old Inca capital Cuzco at 25°Aquarius & 7°Virgo.

The strong aspects of Pluto and Neptune to the resonance coordinates 6°Cancer and 27°Leo/25°Aquarius during the first contacts of Europeans with North America might indicate that these cities and coordinates mark important higher level defense centers of North and South America. This is valid for.

Long before the foundation of the City of Washington and 100 years before the Mayflower landing of 1620 a decisive event occurred which the exactitude of my calculation system by giving proving the important role of the site of Washington DC as a important center of the overall morphic field of the whole of North America: the landing of the Juan de Grijalva expedition on the Yucatan Peninsula of Mexico on 29 June 1518.

Timeline of Pluto Transits in relation to Washington

The relationship between the two astrogeographical degrees of Washington is such that the minimal time span between two consecutive climax transits of tension is 15 and the maximal 34 years.

The relationship between the two resonance coordinates of Moscow is such that the minimal time span between two consecutive climax transits of tension can be as short as 5 years.