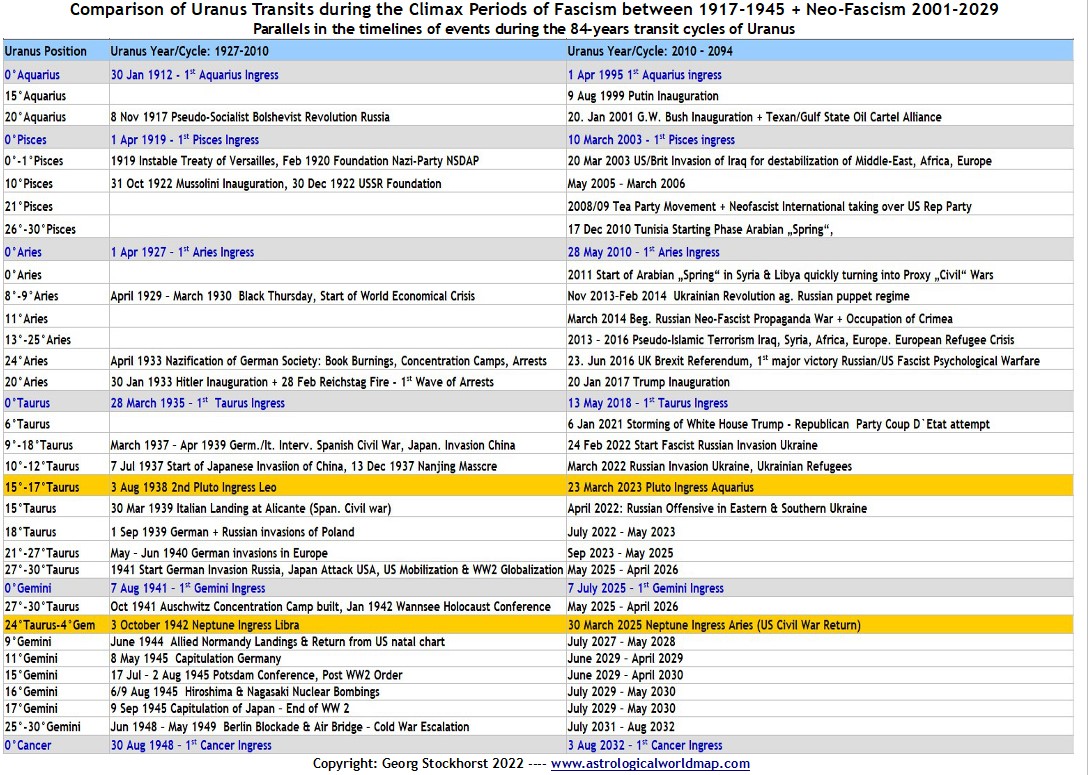 A Uranus year is 84 solar years long. That allows us to study the parallels between the current era and its preceding equivalent periods. History and the structures and issues of timings may so be identified to repeat themselves under the new circumstances.

Astrological investigation of evolution assumes that the rhythmical function of the eternal waves of recurring information from these planetary transit cycles is to bring up the unsolved issues from previous for further development, digestion, understanding, clearing and learning.

The Last and the Current Uranus Cycle

Since the Fascistoid Russian Invasion of Ukraine of 24 February 2022 we have to be sadly aware that some nations or societies seem to be confronted with circumstances that seem to impede certain aspects of collective learning and cultural development.

And that it is not necessarily the poverty of a nation`s land and resources but the contrary: it is the overwhelming size and richness of territories, fossile and mining resources, farming and other potentials that seems to block and destroy the sense for morality, uprightness, human kindness and compassion and the development of social or political self-clearance and pacification with ones own people, lands, status, past and future.

The following table investigates the repetition of issues of fascism brought up by the Bolshevist Revolution under the pseudo-socialist alibis and its Western European equivalent the hyper-capitalist bourgeois lust for hate and dominance of the Mussolini era and what was even worse the robber and murderer mentality of the German Nazis and its Asian partner the former Japanese Kingdom.

Since around the year 2000 the simultaneous rise of the George W. Bush and the Wladimir Putin presidencies willingly sought to promote the coming of a new era of lust for hate, murder, invading nations for plundering and destruction, destabilizing the global community of goodwill and wiping out human progress and the togetherness of nations on our planet.

in 2022 – 20 years later the globalized super dictatorship of China seems to prepare for a new World War in order to make as many territorial gains as it can from the degenerative state of the Russian nation and political culture I think we have to realize how dangerous the situation is that humanity is in.

This following comparison of the parallels of timelines shows that we are far from seeing the end of the age of destruction.

On the contrary: considering which stage of the Uranus cycle we are in by April 2022 we have to be aware that the parallel to the beginning of WW2 is due in the next months and with another 7 most dangerous years ahead until we will see the return of Uranus to the return of the capitulation of the Germanies and Japans of the current Digital Age.