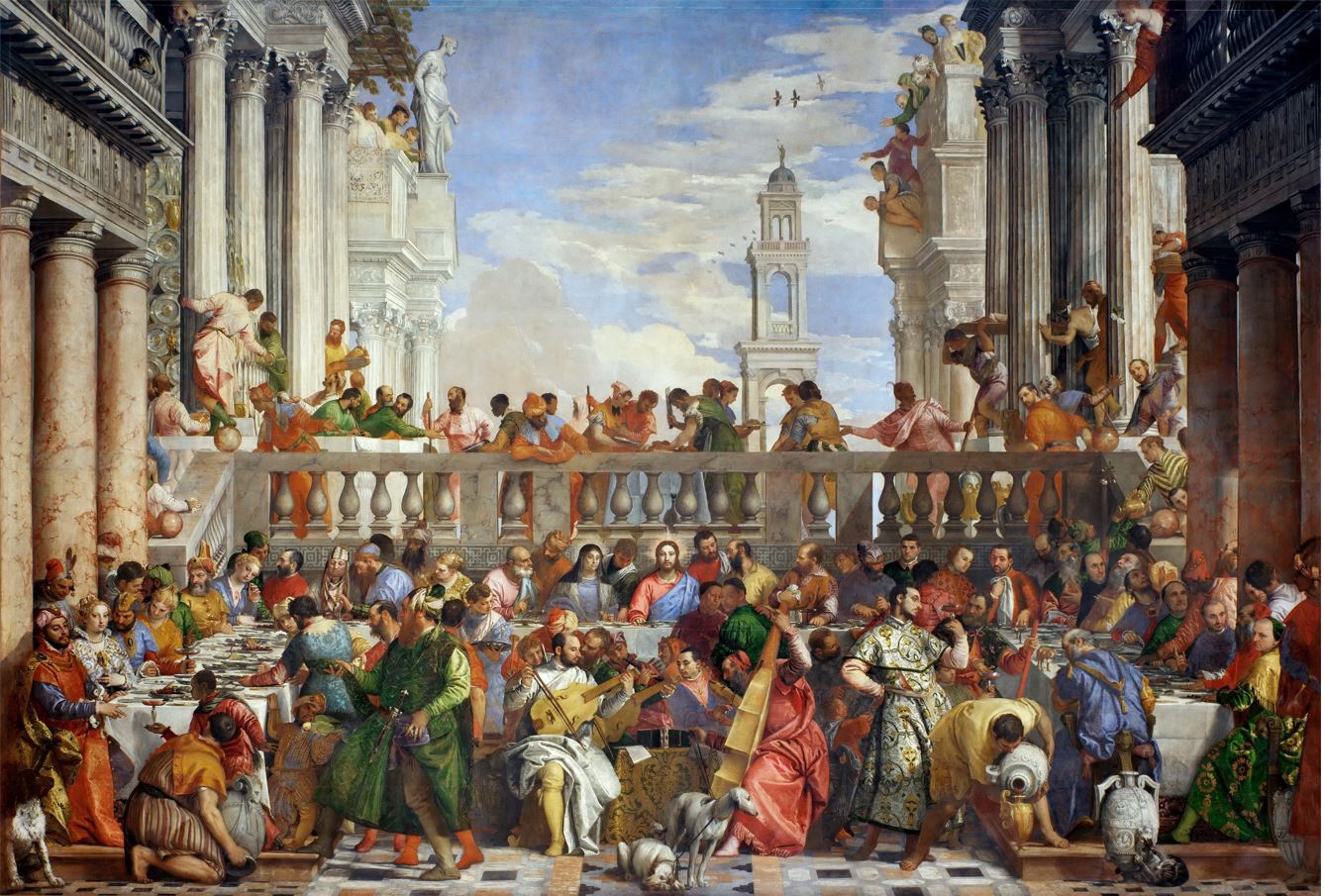 The Wedding Feast at Cana in Art and Astrology. The Age of the European Renaissance as a Scorpio Age in Painting, Art and Architecture.

This article is part of a long-term study – please pass by to see how far I`ve got after a couple of weeks, months or years.

Related articles: Bernini and the Rape of Proserpina, Max Ernst`s sculpture Capricorn. Guggenheim Bilbao in Scorpio Pisces, Scorpio as the sign of sculpting,

Pluto is the planetary indicator for the human capacity to transfer perception and experience into information and stored memory. Pluto so manifests the imprint of patterns of perception, experience and of hormonal reactions onto the perceived stimuli.

The sign of Scorpio, its planetary ruler Pluto and the 8th house and organ in the human system stand for the hardware of perception aka the brain.

Medieval astrology had concluded that Scorpio represented the astrological corresponding sign of sexuality and the sexual organs. But a deeper study of Scorpios and of Plutos functions has to come to the conclusion that their contribution to sexuality is through reacting onto perceived stimuli, by “brewing” and sending out particular hormonal reactions the composition of which is decided by the programming of individuals through information stored in their genetic hardware and the overlay of acquired and stored information about sexuality.

Hence Scorpios and of Plutos roles as the corresponding factors of alchemy, chemistry and hormonal production.

The Age of the European Renaissance as a Scorpio Age

Here is a short summary that explains how this “irregularity” of the span of this period came to pass:

The transformation of water into wine at the Wedding at Cana in Gallilee is the first miracle attributed to Jesus in the Gospel of John. It is not mentioned in the other 3 so-called synoptic gospels of Mathew, Luke and James.

“John 2:1-11 states that Jesus was at a wedding in Cana with his disciples. Jesus’ mother (unnamed in John’s Gospel) told Jesus, “They have no wine,” and Jesus replied, “Woman, what concern is that to you and to me? My hour has not yet come.” His mother then said to the servants, “Do whatever he tells you.” (John 2:3-5). Jesus ordered the servants to fill containers with water and to draw out some and take it to the chief steward (waiter). After tasting it, without knowing where it came from, the steward remarked to the bridegroom that he had departed from the custom of serving the best wine first by serving it last (John 2:6-10). John adds that: “Jesus did this, the first of his signs, in Cana of Galilee, and it revealed his glory; and his disciples believed in him” (John 2:11).” from the wikipedia article.

Just like most places mentioned in Jesus` life the exact location of “Cana in Galilee” has been subject to debate among tourist guides and scholars.

The Wedding Church at the town of Kafr Kanna was built by the Franciscan order at the site of a 4th century CE synagoge supposed to coincide with the place where the miracle the turning of water into wine was performed.

The structure was built between 1881 and 1905 and consecrated on September 30, 1906 with the Sun in Libra, Libras sign ruler Venus in Scorpio and a conjunction of the Moon with Saturn at ca 10° Pisces.

The Wedding Feast at Cana in Art and Astrology

Christians sponsors and Biblical motives widely dominated art production in the Middle Age before the climax period of the Renaissance began in 1425 and metal-letter printing was introduced from around 1440.

The Wedding Feast at Cana has probably been used as a title motive or even an emblem for paintings a thousands times. That does not mean that all painters actually attempted to depict the Biblical story not to speak of the transformation of water into wine.

There are basically two types of possible depictions of biblical motives:

Giottos painting at Scrovegni Chapel as the Foundation of Renaissance Painting

The great Florentine master Giotto di Bondone (1267-1337) is seen as the technical founder of the Italian Renaissance in painting:

“Giotto is credited with first capturing the weight and mass of bodies in space, making them three-dimensional with light and shadow. He abandoned the decorative pattern and complicated line of Byzantine art for heavier, simpler forms and animated his figures with genuine human motivations. Giotto’s explorations and innovations in art during the early 14th century developed, a full century later, into the Italian Renaissance.” (source: Washington National Gallery of Art)

The Timing of Giottos painting at Scorvegni Chapel

Basically the Age of the European Renaissance can therefore be divided into two halves: the phase of its technical foundation that began between the end of the 12th and beginning of the 13th centuries and the climax of its largest-scale spreading through the mass production of its innovations in art, architecture and technologies through the effects of the introduction of metal-letterpress printing from around 1440 to 1600.

Particularly Giottos master piece – the fresco cycle at Scrovegni Chapel in Padua completed right at the beginning of the Water Age of 1306-1602 in ca. 1305 created the standards for a new style of painting that went beyond the tight patterns of the prevailing medieval iconography by detailing individual expression of the depicted personnel.

Giottos Version of the Wedding Feast at Cana

Giotto and his team covered all the internal surfaces of the chapel with frescoes depicting the life of the Godmother and of Jesus including the walls and the ceiling. The shift from the traditionally golden to the even more expensive lapis lazuli based sky-blue backgrounds was an innovative if not revolutionary step made by Giotto and his team at Scrovegni chapel.

The “Wedding Feast at Cana” painting by Paolo Veronese completed in 1563 was financed by the House of Medici. Its size is 9,90 m × 6,66 m. Insights into Veroneses attitude towards his work in “religious” and church-paid painting can be taken from his explanations given during an appearance before an Inquisition Tribunal in Venice on July, 18th 1573.

An attempt for a description of works of art surely is the best way to start any interpretation of works of art. Getting a clearer image of its components can help to distinguish between its factually existing features and the reflexes, associations, resistances, diversions worked by our personal emotional or mental conclusion and judgement. It is a test for astrological investigation too.

Planetary transits during the completion in 1563 and the Zeitgeist

During the year 1563 Pluto (248 years cycle), Neptune (165-years cycle) and Uranus (84-years cycle) as the most important planetary indicators for the “Zeitgeist” (spirit of the age) under which the painting was created transited the following positions:

The coincidence of the year of completion of this late Renaissance painting with a conjunction of Saturn and Jupiter can be examined as a hint at its potential as a document of a climax of stabilization of elements of form and of its aim of creating a kind of a “classical work” for whatever purposes it was worked for.

Astrogeographical Position of the painting in Pisces with Scorpio

Paolo Veroneses painting was created for the refectory (dining room) at the monastery San Giorgio Maggiore on a small island in the laguna of the city of Venice.

Current location of Veroneses painting at the Louvre in Paris

Leonardo da Vincis mural painting The Last Supper covers an end wall of the refectory at the monastery of Santa Maria delle Grazie in Milan, Italy.

Leonardos personal karmic issues of development in regard to dealing with the fashions and psychological issues of the Zeitgeist were:

Leonardos individual karmic issues as shown by the personal planets:

Paulo Veroneses 1573 Venetian version of the biblical incident of the Last Supper before the crucifixion of the Christ was created 10 years after his “Wedding Feast at Cana”. It was one of several versions of that incident created by Veronese – and probably the most obviously political one.

The 13,09 m wide and 5,60 m tall oil painting was painted on one of the largest canvases of the 16th century for the refectory of the Basilica di Santi Giovanni e Paolo.

The work was originally painted under the title of The Last Supper, to replace an earlier work by Titian of this subject destroyed in the fire of 1571. But Veronese had to change the title to “The Feast in the House of Levi” and make other changes after having to appear before an Inquisition Tribunal on 18 July 1573. During the routine inquiry the inquisition objected to details like the depiction of German soldiers who were supposed to represent the Lutheran reformation and seriously demanded that a dog should be replaced by a Mary Magdalene.

The biblical incident of the Feast in the House of the Jewish high priest Levi is when Christ announces that one of his disciples will betray him. The change of titles served to cover up the fuller impact of the depicted criticism by transferring it away from the contemporary Catholic church and onto the Jewish clergy at times 1600 years back. The use of Jewish backgrounds for covering up contemporary corruption is symptomatic of the

In 1573 the 3 outer (of the 12 systemical) planets that define the Zeitgeist of an era occupied the following signs:

Veronese`s 1585 version of the “Last Supper”

Jacopo Robusti named Tintoretto was born in Venice in late September or early October 1518. His work is identified with the Venetian school and with Mannerism. His version of the “Wedding Feast at Cana” was created in 1561 which was before before Paolo Veroneses version of 1563. That really surprised me because I felt that his painting looks far more modern, vivid, realistic and more advanced concept of art as well as of depiction of individuality of character.

The Early Netherlandish Painter Gerard David born in ca. 1460 in the town of Oudewater painted a version of the motive of the Marriage at Cana around 1500.