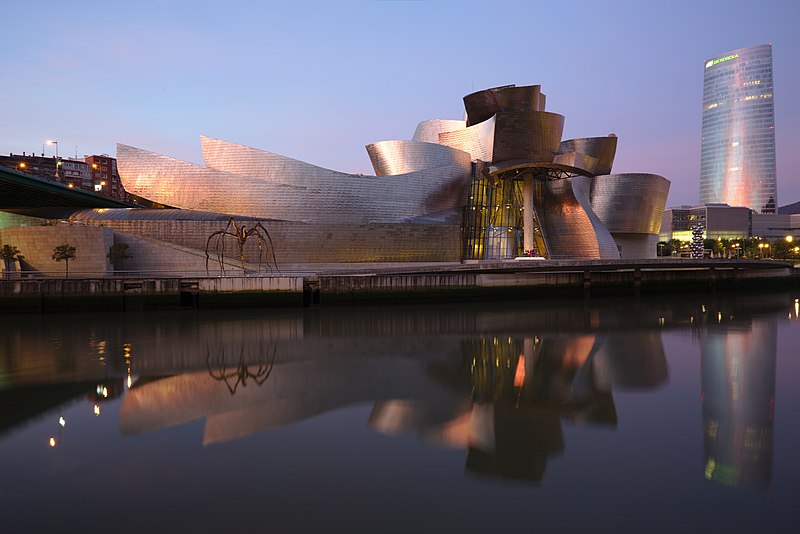 Related articles: The Fondation Louis Vuitton building in astrogeography, Rudolf Steiner`s Goetheanum,  Scorpio as the sign of sculpting, Opera Houses and Pisces as the sign of Music, Monuments & Mystification in Pisces,  The polarity of Aquarius with Scorpio, The Mahabodhi Temple in Bodhgaya. On the parallels of helmets, closed up containers, bulbs and bunkers with Scorpio,

Celebrated for its unique design the Guggenheim Museum in Bilbao is a world famous museum of modern art built on the banks of Nervión river ca. 10 kilometres from its mouth at the Atlantic Sea. The Port of Bilbao is currently the 4th most busiest in Spain and has was even more important during the Spanish colonial history.

The picture above reveals only one in a number of inspirations that architect Frank Gehry, born on 28 February 1929 in Toronto, Canada with the Sun in Pisces must have had when designing the Guggenheim Museum in Bilbao, Spain. It shows that the building is designed as a huge maritime ship with two or more smaller ships mounted on it. The decision for the construction of a ship museum can be understood as an allegory of a transformation (Scorpio) of Bilbao from an important sea-port city (Pisces) into a cultural metropolis. The museum was inaugurated on 18 October 1997.

Astrogeographical position of the Guggenheim Museum for morphogenetic field level 3 (surrounding area) which describes the energetical topics of the whole of the constructions site on a river bank and how it is embedded in the land: the construction site has one coordinate in highly relaxed, mystic, spiritual water sign Pisces the sign of music, art, sound, subtle space, imagination, dreaming, fairy-tales, spirituality, temples, the otherworld, unconscious, unknown, invisible, entertainment, intoxication, forgetting, dissolution and the stimulation of letting go of habitual patterns and stress. In astrogeographical field studies I have observed buildings with features of ships in Pisces the astrological significator for the oceans numerous times. It may help against fears of drowning to live in a house that looks or makes one feel like living on a ship.

The stimulation from invisible, unconscious and imaginative aspects from Pisces is highly supportive for places of art. Pisces supports letting oneself go with the flow of energies and associations, the other-world, dream time, mystification and fairy tales. This quality makes it the ideal astrogeographical position for temples, museums, concert halls, bars, pubs, restaurants, places of music and institutions dedicated to the reconnection with the spiritual plane. Basically Pisces supports all arts but particularly the spheres of music, sound and film. Pisces is appears as an energetical factor for places of museums and particularly for visionary art not only because it supports the readiness to make out of the impressions received through art whatever one associates with them. It simply helps visitors to leave patterns of everyday life and other such limitations behind allowing different and new perspectives to unfold and enter into a holiday mode.

The 2nd coordinate of the Guggenheim Bilbao is located in solid, fixed water sign Scorpio the sign of stability and defense, art production, sculpting, imaging, visualization, copies, photography, metal working, welding, steel, assimilation, amalgamation, mixture, alchemy, chemistry, structural analysis. Its affinity with giants and large proportions may be found to support the impression of a less fragile but rather gigantic vessel of the museum ship explaining its appeal to monumentality and the attempt to create an image that concentrates on a larger single entity rather on the single elements and details that make out the whole of the visualized system.

Mental water sign Scorpio plays a big and important role in art particularly through its focus on visual perception, imaging and the examination of the structual elements of perceived objects. As the Sun sign in the birth chart of Pablo Picasso it has a strong affinity with the history of Spanish art and culture anyway.  The realms of art ruled or co-ruled by Scorpio are sculpting, stone masonry, pottery, copying, imaging, photography, alchemy and any artwork made using metal.