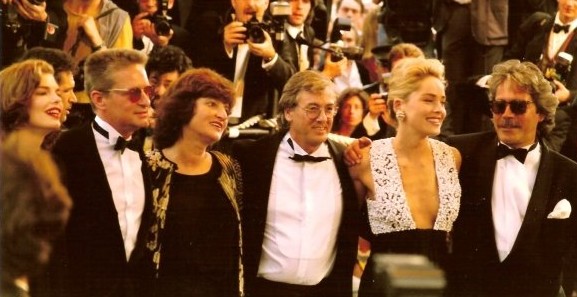 Michael Douglas and Sharon Stone at the “Basic Instinct House”. Astrology, people and places: The astrogeographical position of the film location in relation to the actor`s birth charts.

Related articles: Bill Gates & the Astrology of the Microsoft Headquarters, Oprah Winfreys constellation at Harpo Studios in Chicago, Steven Jobs and the Apple Headquarters in Cupertino, Alexis Tsipras` Constellation at the Office of the Greek Prime Minister

Michael Douglas and Sharon Stone at the “Basic Instinct House”

Astrogeographical position of the House in Scorpio with Leo

Astrogeographical position of the the seaside house of Catherine Tramell (Sharon Stone) south of Monterey, CA in the movie “Basic Instinct” with Michael Douglas for morphogenetic field level 4 (exact adress) which describes the atmosphere and energetical topics of the house itself: the house is located in highly magnetic, energetic, royal fire sign Leo the sign of the sun, life, self-expression, emotionality, sexuality and in the last decade of highly alert, defensive, fixed water sign Scorpio the sign of perception, dominance, trauma, pain, shock, hierarchy.

Although the characters and the storyline of this film are purely fictional it is really interesting to have a look at the astrogeographical qualities of the filming places and their correspondences with the birth charts of the two actors. This could help us get an idea about how the quality of a place is possibly reflected in the atmosphere of a film and in what way the filming place may have been stimulative for an actor`s perfomance.

According to the Rodden archives the exact birth time for Sharon Stone is not publicly known.

The astrogeographical coordinate in the last degrees of Scorpio stands for the fourth house(feeling at home) in Sharon Stone`s birth chart indicating that in acting she may have made use of this atmosphere of the place to imagine herself to be the householder and the person living here. The coordinate in Leo corresponds to the twelfth house in her birth chart. This aspect stands for a hiding place, holiday stay atmosphere and a place of secret encounters. This aspect could have supported those elements of atmosphere in the film that led the viewers into speculations about her secret motives, passions and manipulative intentions.

The combination of the fourth with the twelfth astrological principle brings together two aspects of the water element. The fourth house aspect which relates to the emotional water sign Cancer is known to support and stimulate emotional reliability and emotional binding. The twelfth astrological principle which relates to the spiritual water sign Pisces the sign of the ocean and the spiritual plane on the other hand is known for it`s changeable nature and the habit of consuming emotional stimulation through changes of partners. In this regard the relation between the two single astrogeographical aspects of the place offers a great astrological definition for the character portrayed by Sharon Stone. A simile for the astrological constellation of house 4 with house 12 is the mythological image of a water nymph or an Undine as the great Paracelsus named it.

The Scorpio resonance coordinate of the “Basic Instinct House” can be assumed to have stimulated the ascending sign and first house aspects in Michael Douglas birth chart, psychological system and personality. That must have helped him as an actor to imagine an atmosphere that stimulated his urge to be the ruler of the place and dominate a woman and the relationship here.

The coordinate in Leo activated his ninth house, the house of travelling and of luxury. That aspect indicaties a situation in which even though he was not in the position to be a householder but rather a visitor and someone who came here on a journey he may have felt ifree and easy to move around here and seek adventure.

The combination of the first with the ninth astrological house and principle brings together two aspects related to fire signs and could be referred to as the constellation of a hunter.