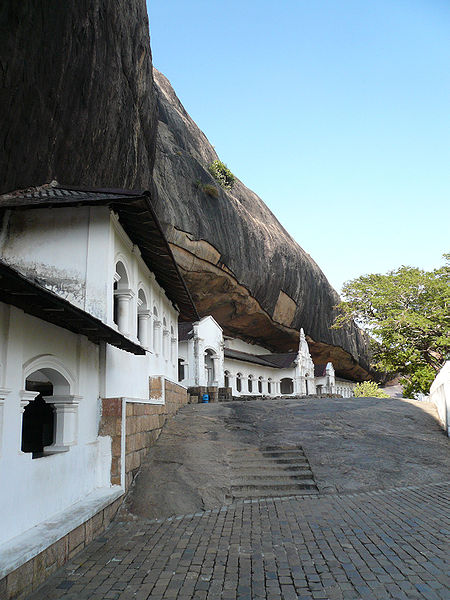 Dambulla cave temple  also known as the Golden Temple of Dambulla is the largest and best-preserved cave temple complex in Sri Lanka and a World Heritage Site (since 1991) dating back to the 1st century BCE. It consists of 5 caves with sculptures of Buddha, Hindu gods Saman (Indra) and Vishnu and several kings. The walls and ceilings of the caves are fully covered with paintings. The rock fortress of Sigiriya the supposed capital of the demon King Ravana is located in about 19 km distance from the caves and can be seen from here. Compare my article about Sigiriya.

Astrogeographic position for morphogenetical field level 4 which describes the atmosphere of the caves: one coordinate lies between creative, innovative spiritual air sign Aquarius the sign of the sky, heaven, paradise and spiritual self-finding and mystic spiritual water sign Pisces the sign of spirituality, imagination, dreaming, mystification, legends, letting go and the most important indicator for the function of temples for reconnecting us with the spiritual plane. The 2nd coordinate lies in highly magnetic royal fire sign Leo sign of the sun, light, heart, power stations, self-centering and emotional self-expression. As the sign of kings Leo resonates with the fact that there is a cave dedicated to the Divine King and one to the Great Kings used for relating the caves to the royal state cult.

Astrogeographic position for morphogenetical field level 3 which describes how the two temple sites are embedded in the landscape:  The enormous energetical difference between the site of the Cave Temples and the Golden Temple with the giant Buddha statue is explained by the different position for field level 3. The ancient cave temples lie in a larger morphogenetic field located in the combination of earth sign Taurus sign of the earth, grounding and growing roots with air sign Libra sign of decoration, the ideal of higher culture, peace and harmony. At the site of the modern giant golden Buddha the coordinate located in Taurus is just the same whereas the 2nd coordinate falls on the first degree of highly defensive water sign Scorpio the sign of monumental statues, sculpting, imaging, fortresses, imaging, forging, welding and of idols in general.

The Golden Temple at Dambulla

The Golden Temple at Dambulla is located just downhill from the site of the cave temples serving as a highlighting modern temple installation at the entrance to the ancient cave temples.

Astrogeographic position of the Golden Temple at Dambulla for morphogenetical field level 4 which describes the atmosphere, function and architecture of the Buddha sculpture itself:  The Golden Temple at Dambulla is located in dynamic, male, erect, phallic fire sign Aries sign of action, fighting, warfare, upright positions. The 2nd coordinate lies in service-orientated air sign Libra the sign of gates, openings, doors, harmony, symmetry, balance, beauty, decoration and indicator for the symmetry of the building.