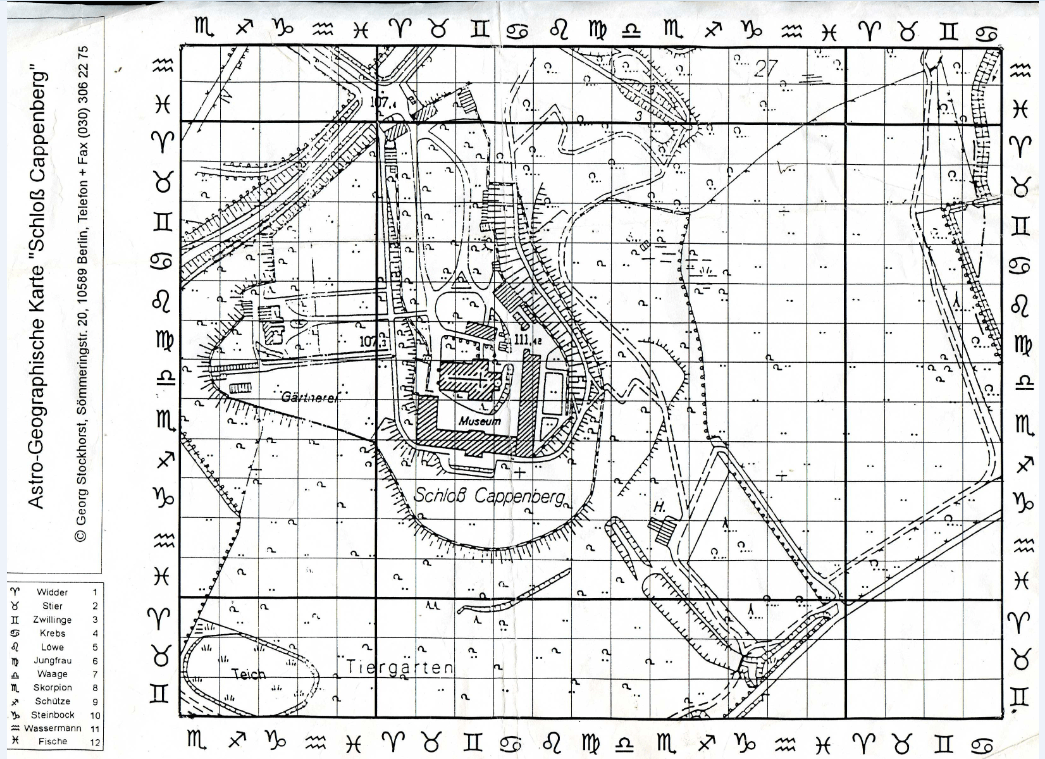 Astrological Geomancy – what is it? An introduction to astrological geomancy and systemical astrogeography. – (this text was originally written in 1996)

Astrological Geomancy – what is it?

To be precise, Astrological Geomancy is an area of research in which the sciences of astrology and geomancy overlap. Astrological symbols, techniques and research results are to be met very often in Geomancy and are for example an essential component of Feng Shui’s teachings and methodology. The system that I have developed is, however, much more complex, because it allows the meaning of individual places with respect to their environment to be determined on 6 different levels, and offers the unique possibility of calculating the interweaving of different levels of reality from the smallest unit of measurement with zones 2.5m square, which determines the astrological co-ordinates of the position of a stool in a living room, up to a zone size of 622km square, where it’s a matter of the astrological coordinates of a whole country.

The position of the fields is determined by astrological consideration, evaluation, critical review and in the further stage of the process through experience with data. From a star sign to a zodiac:  occasional considerations that a place could be in this or that sign is checked in such a way that the characteristic features of the neighbouring signs have to be found to the north & south or the east and west of one zone in their natural systemic astrological order.

And why I called this method geomancy and not geography is because it is basically a reading of the signs at a place as an attempt to understand it´s features, the plants, buildings, atmosphere, things happening here, how it affects us, which information we take on and how the site is embedded in the surroundings. And it is not theoretical or by maps but a practical field study which I feel is the most positive approach to the term geomancy as in the sense of a mantical method to understand places on earth. And apart from that I developed the method while hiking thousands and thousands of kilometres and not as in the case of my astrogeographical world map while sitting in front of a computer.  But still both systems are directly related to each other.

I decided to use a 30m zone length only after many experiments with different lengths. I wanted to find out which sign of the zodiac the newsagent, the chemist, the bank or the baker was in. After I had just speculated about such astrological correspondences for years, I started at some point to systematize them and mark them on town plans. Only then did it become clear how imprecise not only my speculations were, but also the one-meter steps with which I had tried to map the streets up to then. At this point, it was in 1992, I was so frustrated with my results that I almost could have given up my whole research. I had critically checked the mapping of the streets mentioned above for so long that I was hardly able to feel a sense of euphoria about any new discovery. Although it’s the spurts of euphoria that drive us on to new research, they are also manic feelings and basically personal over-estimations. As long as I found myself more ingenial than God’s perfect order, whose structure I was looking for, I experienced again and again how disappointment and as a result a devaluation of all my research results arose when the spurt of euphoria was over.In the end, I only found the fruits of my euphoric flights of fantasy through my critical disappointments.

And so I started to draw zones in the street plans from the town planning department exactly 30 m square and then to rub out the sides of the zones again and again in order to push them back and forth. And that took years as well. At first I had expected that in principle every chemist should lie in the sign of Virgo and every newsagent in Gemini. But of course that wasn’t the case. Nonetheless, I found out by mapping the Kantstraße that 4 out of 6 chemists lie in Virgo, the sign of medicine. And not only that: the branch of the Chemists’ and Doctors’ Bank lies in Virgo as well:

Right next door, just 20 m further east, in Libra, the sign of love and relationships and also princesses, is this shop for wedding dresses:This is also a discovery of the very best, because 99,9 out of 100 astrologers would certainly have thought off the cuff that such a shop would be in Libra, the sign for beauty, relationships and marriage. The north-south coordinates lie in the sign of Scorpio – so that the bride can go through a metamorphosis with this outfit – Cinderella turns into a fairy tale princess here:

The next highlight in the Zodiac sequence in the Kantstraße is the Schlecker (engl. : Licker) tongue in the sign of Scorpio, about 20m east of the wedding dress shop. The common Scorpio tongue’s sensuousness is so to say the opposite of the Taurus tongue’s (sign of the mouth), in that more is tasted with the eyes in Scorpio than in Taurus. Otherwise the motifs are very similar – even though for the middle class the Taurus greed may be socially more acceptable.

(Scorpio/Scorpio) I have often observed the cheap drugstore Schlecker in Scorpio, whereas Drospa is more often to be found in Gemini, Virgo or Aquarius and Kaisers in Sagittarius. (Drospa and Kaisers are other chains of cheap drugstores). Kantstraße 130 Scorpio (W-E) – Scorpio (N-S)
Opposite the Chemists’ and Doctors’ Bank and likewise in the sign of Virgo lies the branch of the discount book chain 2001, as shown below. Discount stores like these often have a white exterior in the sign of Virgo, as you can see here, and also in examples of the cheap flower chain Blume 2000 (note the similarity in the name) and the discount bakers right next door. Both shops are exactly a Zodiac length of 360m west of the zone where the Chemists’ and Doctors’ Bank and “2001” lie:

This picture shows the transition between a Pisces and an Aries zone and is also the starting point of a Zodiac of 360 m. The red cars are of course already in Aries, but the blue one as well. Although you could be inclined to think: Pisces = water sign = blue – Aries = fire sign = red. But of course cars are mobile and always park there where they fit according to the current transits. The boundary runs so here that the entrance to the house at Kantstraße 108 already lies in the sign of Aries. The shop advertisement “Dreamland” marks the difference to the Aries zone. “Dreamland” is also of course a wonderful symbol for a Pisces zone, since you wouldn’t think of any other sign in connection with a dream world.

The intersection of  Kurfürstendamm and Uhlandstrasse

The intersection of  Kurfürstendamm and Uhlandstrasse is another brilliant example for the  way buildings are settled in the  perfect morphogenetic structure of land- and townscapes.  The astrogeomantic field level to be considered here is 30 m zones. The round building on the left (west) side is located in Sagittarius the sign of the bow and most important indicator for round forms.  The white, rectangular office building in the centre is located in Capricorn the sign of bones, calcium and as the beginning of winter and the rebirth of light also the most important astrological indicator for white colour. The silver coloured facade on the right (east) side of the intersection with the futuristic entrance in the shape of a Y is located in Aquarius the sign of moving upwards, flying and major indicator for shiny, metallic surfaces.

Corner of Kurfürstendamm and Uhlandstrasse in the signs Sagittarius, Capricorn and Aquarius (from left to right)

The round shape of buildings is symptomatic of places in Sagittarius

The rectangular shape and white facade are symptomatic of Capricorn. The slightly bent inward form of the building has a defensive aspect and represents a reduction of the dominant position of the building. This feature too is typical for Capricorn and can be observed at Michaeler Tor (St. Michael`s Gate) of Hofburg Palace in Vienna:

Michaeler Tor (St. Michael`s Gate) of Hofburg Palace in Vienna located in Capricorn with Pisces. A typical example for a building with it`s centre bent inwards.

The silver coloured facade on the right (east) side of the intersection with the futuristic entrance in the shape of a Y is located in Aquarius the sign of moving upwards, flying and major indicator for shiny, metallic surfaces.

Astrogical gemantical map of the old town of Berlin for 360 meter fields.

The “Gloriette” is a building in the park of Schönbrunn Palace in Vienna, Austria located in the air sign Libra for 30m zones. The building is a perfect embodiement of nearly all the traits of the sign of Libra the major indicator for courtly culture and here particularly for austrian culture:  it is symmetical,  decorated,  open and it even has the shape of the astrological symbol of Libra:    .  The 2nd coordinate here is in Pisces. (compare: Astrological Town Plan Vienna)

This is a  part of the gaswork station in Charlottenburg located in Sagittarius with Pisces. The ensemble of the 100 year old small red tower with the enormously huge balls (gas tanks) is really impressive. Sagittarius is to be seen here as the sign of round forms, balls, round towers (shafts), playgrounds and even caricature. (compare:  Astrological Town Plan Berlin)

The BMW tower in Munich combines a four-towers building resembling a four-cylinder engine with a basin meant to catch and channel the energies accumulated by the towers. The site is located in the combination of the highly energetic, magnetic, male fire sign Leo the sign of power stations and indicator for engine building and in female earth sign Taurus the sign of the earth, grounding, money and income which is the indicator for the basin here. (Compare: Astrological Town Plan Munich)

For a short period Hansa Hochhaus in Cologne built in 1925 was the highest “skyscraper” in Europe . It is the seat of a consumer electronics store chain named “Saturn” an it`s astrological geomantic coordinates are both in the strict, hierarchical earth sign Capricorn the sign ruled by Saturn. (Compare:  Astrological town plan Cologne)