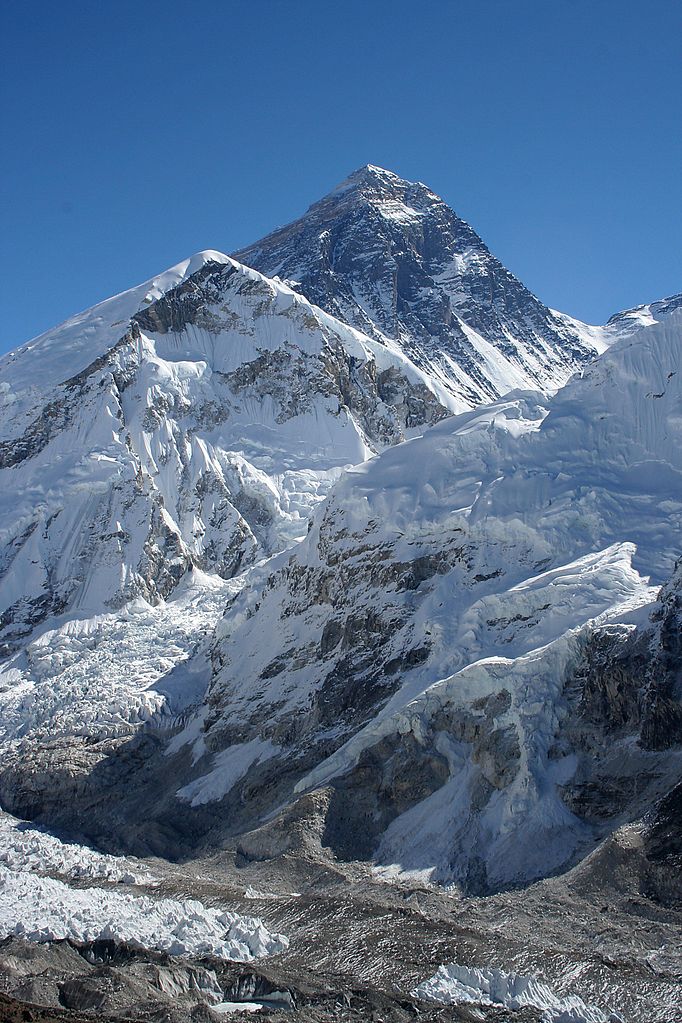 Edmund Hillary and Tenzing Norgay on Mount Everest. Astrology and history: the astrogeographical position of Mount Everest and the conjunction of royalty.

Related articles: Mount Fuji in astrogeography, Astrology & Magical Places: The Beauty of Mount Taranaki, Mount Kailash in Cancer with Capricorn, The Sacred Mountains in China, Drachenfels (dragon mountain) in Scorpio the sign of dragons, The Eruption of Mount Pinatubo in 1991, The three steps to Mount Olympus, St. Catherine Monastery at the Mount of Moses.

With an elevation of 8,848 m Mount Everest is Earth’s highest mountain above sea level.

An investigation into the astrogeographical qualities of a full mountain can not be limited to a single morphogenetical radius/field level for several reasons. One important point here is that the Himalayan mountain ranges have grown through the pressure from the shifting of tectonic plates which involves processes that have to be understood as part of tectonic forces that move the continents on the whole of our planet.

For understanding Mount Everest as the highest mountain on the planet the global perspective of field level 1 should be applied to understand its supra-regional importance. The constellation of the region of Mount Everest on the border between Nepal and Tibet for field level 1 combines the earth sign Taurus the sign of solid ground with the fire sign Sagittarius the sign of expansion.

Astrogeographical position of Mt. Everest for morphogenetic field level 1 which describes its global resonance topics as the highest elevation on our planet making it the highest point of contact of the earth surface with the sky and heaven: one resonance coordinate of Mt. Everest is located at 23° in highly dynamic, movable fire sign Sagittarius the sign of expansion, growth, accumulation and most important astrogeographical resonator for lava fields and magma chambers. Compare Hawaiʻi Volcanoes National Park in Sagittarius. The 2nd coordinate of the region is in solid, fixed earth sign Taurus sign of the earth and solid ground itself and major resonator for the accumulation of territory. The combination of Sagittarius with Taurus delivers a strong astrological simile for the maximal accumulation of solid ground in this region.

Astrogeographical position for morphogenetic field level 3 (surrounding area) which describes the energetical topics of the central area of Mt. Everest in which the summit area is located: For understanding the way that the summit of a mountain is embedded in the surrounding area of the center of the astrogeographical radius or field level 3 should be considered. The resonance coordinates for morphogenetic level 3 are in the combination of air sign Gemini with water sign Cancer. In my field studies and calculations air signs have turned out to seem highly typical for mountain tops possibly because they indicate standing out into the air or surrounded by it. Cancer stands for the self-centered character of a place and may be understood to put the focus on the importance of the summit as a central landmark for the springs of water flowing down from the massif.

The first successful ascent was made by Edmund Hillary and Tenzing Norgay on 29 May 1953 with the royal conjunction of the Sun with Jupiter at midheaven in the Gemini resonance coordinate of Mount Everest. Uranus the planet of ascension was in the second coordinate of the site in Cancer.

The first successful ascent by Edmund Hillary and Tenzing Norgay was achieved on 29 May 1953 with the royal conjunction of the Sun with Jupiter at mid-heaven in of the coordinates of the site in Gemini. Uranus the planet of ascension was in the second coordinate of the site in Cancer.

A look at Edmund Hillary s birth chart reveals the same conjunction of royalty of the Sun with Jupiter in the house of fame (7th house) in exact conjunction with the astrogeographical resonance coordinate of the Mount Everest summit on the last degrees of Cancer.

The coincidence of the conjunction of Mt. Everest with this detail of Edmund Hillary s individual karmic issues as shown by his natal chart seems an archetypal example for the intense resonance between a particular place and the the experience of the native at this place. Usually we do not have the slightest idea of how we relate to places and what they trigger in our systems. But this historical example delivers a strong image of how intensely the planetary constellation of fame, public recognition, personal success and royalty in Hillary`s chart and life coincided with the place of his glorious victory (Sun-Jupiter) which even brought him nobility status. .

The 2nd resonance coordinate of Mt. Everest falling in the 6th house appears to be equally auspicious because of the tremendous success of the expedition. And it can be noted and stated from this example that as a stimulation of readiness for personal adaptation and a careful, conscientious, hard-working, prudent and patient approach the 6th house aspect can be an extremely successful aspect.  Compare:  Bill Gates at the Microsoft Headquarters and Angela Merkel at the German Chancellery.

The wikipedia article has yet another detail on the coincidence of the first Mt. Everest ascent with the topics of royalty and coronation in store: “News of the expedition reached Britain on the day of the coronation of Queen Elizabeth II, and the press called the successful ascent a coronation gift.”

The Sun Chart for Tenzing Norgay is calculated for sunrise on his birth date and should be interpreted for the Sun Chart ascendant. It shows the astrogeographical coordinates of the site in the first and second houses. This is to be seen as a situation where Tenzing Norgay personally is in the position of being the landlord, housekeeper, host and ruler of the ground or even in a mystical way a kind of incarnation of the mountain itself.