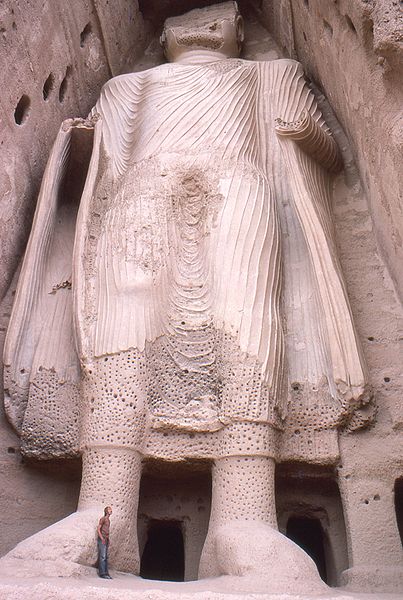 Related articles: Scorpio as the sign of sculpting, Buddhist Stupas in Astrology,  Shwedagon Pagoda in Myanmar, The Mahabodhi Temple in Bodhgaya, A Monumental Buddha Maitreya Statue in Scorpio, The “Spring Temple Buddha”, The Emerald Buddha, The Porcelain Pagoda of Nanjing, Cancer and Virgo – Jokhang Temple in Lhasa, The mystical Buddhist university of Nalanda, The White Horse Temple – The first Buddhist Temple in China, The Longmen Grottoes, The Legendary Shaolin Monastery Libra as the sign of symmetry,

Libra and Scorpio – The Buddhas of Bamiyan

The giant Buddha Statues of Bamiyan in Afghanistan were carved into the red sandstone in the early sixth century AD. Representing the largest standing Buddha statues in the world they were of a height of 35 and 53 meters and were witness to a unique tradition of Buddhist art which developed in this region between the 3rd and 10th Century AD.

Astrogeographical position of the former site of the Buddhas of Bamiyan for morphogenetic field level 3 (surrounding area) which describes the energetical topics of the area of the sculptures: The site is situated in the combination of solid, fixed water sign Scorpio the sign of sculpting, imaging, art work, photography with aristocratic air sign Libra the sign of harmony, balance, beauty, symmetry, justice, peace, angels.
The fixed sign of Scorpio is the astrological correspondening sign of the crafts of forging and stone carving. Just like the statue of Sri Gomateshvara in India and the mountain shrine of Göbekli Tepe in Turkey the Buddhas of Bamiyan were important examples for projects of colossal religious sculptures carved out from the rocks in places of astrogeographical resonance with Scorpio. The fixed principle of Scorpio proves to be an aspect of monumental character, size and stability of buildings here.
Libra can be understood here as supporting the reflex to aesthetically beautify and decorate the surroundings of a city with works of art here. In addition to the two large sculptures a series of small sculptures have also been worked into the rocks.

After the extinction of Buddhism by Islam in this region from the 10th Century the statues lost their importance as places of worship. In the 17th and 19th Century the statues were partly destroyed by artillery fire in the name of Islam and on 12/Mar/2001 Taliban militia destroyed the remains of these irreplaceable works of art. On that day Mars and Pluto were in conjunction in the mental sign of Sagittarius forming a square to the Sun in the spiritual sign of Pisces. If we consider Sagittarius as the the astrological corresponding sign of the priest castes while Pisces stands for the aspect of spirituality this constellation clearly documents a central motif of the sign of Sagittarius: the urge for replacing spirituality through one currently more profitable ideology.

The Buddhas of Bamiyan are one of numerous examples from astrogeographical field studies where Scorpio appears as the sign of the stone-masonry and blacksmith trades together with large stone sculptures.

The decision to built the 153 m tall “Spring Temple Buddha” (inaugurated in 2008) in the Chinese province of Henan is said to have been taken under the impression of the destruction of the Bamiyan Buddhas. Though that may not actually be true the sculpture still works as an emblematic demonstration of the vividness of Buddhism.