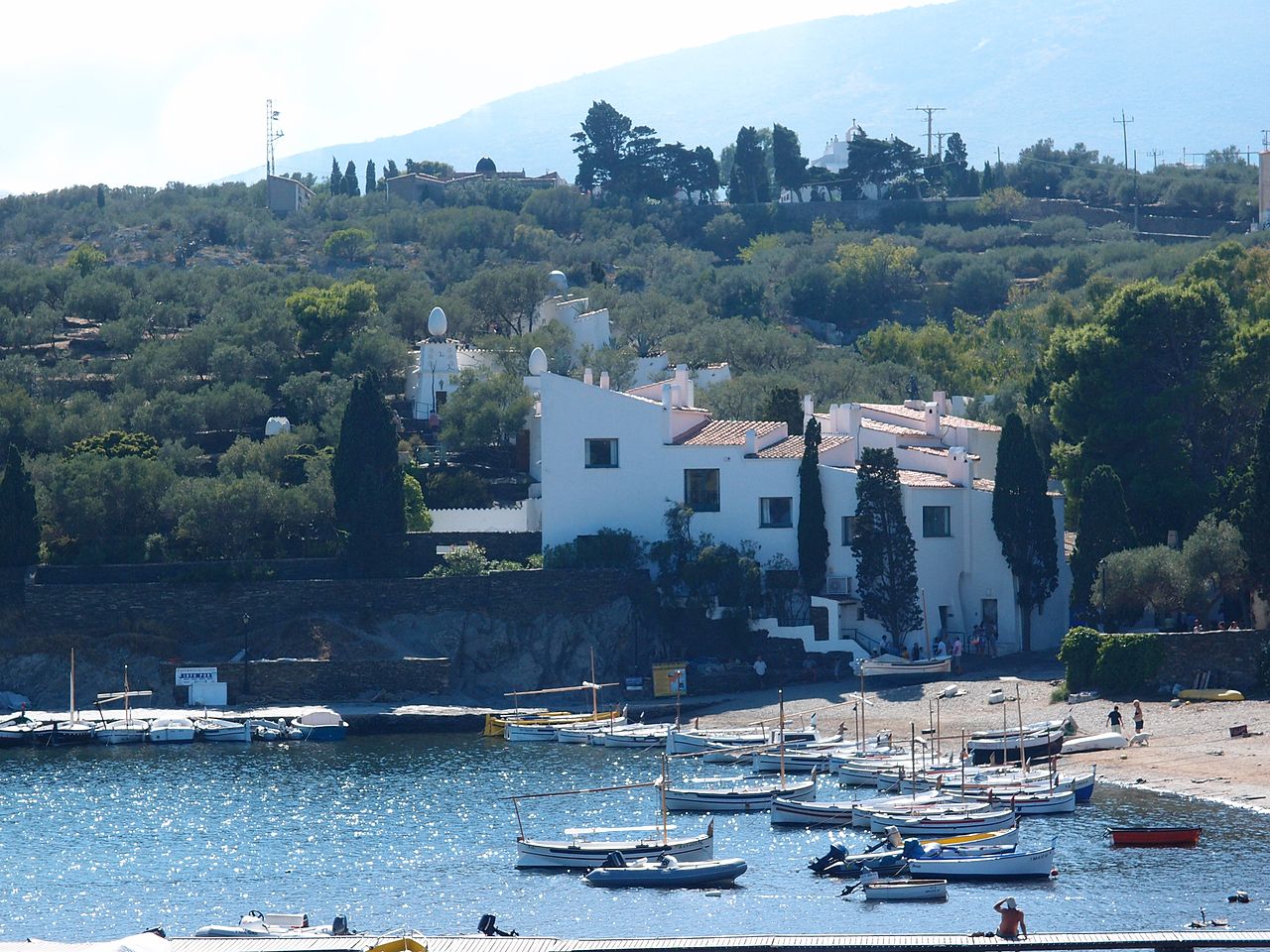 The Egg on top of Dali´s House – Shapes of Cancer

Astrology, architecture & the psychology of art: The Egg on top of Dali´s House – astrogeographical examples for the topic of eggs & the role of water sign Cancer

Cancer is the natural indicator for our mothers, motherhood, the interior and the home inside ourselves. And as the sign of the uterus and the vagina Cancer stands for eggs as the shelter and container of the conception of the newborn. “Los cojones” or the balls are the male organs that naturally relate to Cancer. In this text I am showing examples for the congruence of the astrogeographic position of buildings with Cancer as an important astrological indicator for elements of style and design that relate to eggs or the uterus.

Dali and the egg on top of a house in Cancer

The tower behind the Dali house in Cadaques, Catalunya, Spain is round with an egg on its top. An egg on top of a phallic form like a tower is a typical motif in the surrealistic art of Salvador Dali. In terms of genitals the egg`s natural position would be below the phallus. But in terms of desire the phallus when reaching for the sky or say desired object seeks the egg on top of itself here. Or the egg is placed on top of the phallus to show that desire is the ruling force  that erects buildings. Or else: the egg simply propagates the focus on sexuality, pregnancy and fertility in art, philosophy and entertainment.

Astrogeographic position for field level 4 (exact position) which describes the atmosphere of the building itself: the tower is located in emotional water sign Cancer the sign of motherhood, fertility, eggs, pregnancy, conception and the uterus.  Cancer stands for the motif of the egg which is presented on top of the building here as a symbol of fertility. The astrogeographical coordinate in Cancer is in direct resonance with the symbol of the egg here which sort of takes the place of the head of the being depicted by the tower. This paradox is highly typical for Dali as it opens the space for multidimensional interpretations. Apart from that Cancer relates also to the ascendant in Dali`s birth chart indicating a direct and intense resonance of the astrogeographical position of the site with Dali´s personality. The second ccordinate of the site is in creative, innovative air sign Aquarius the sign of the sky, of abstraction and of the reconnection with the motifs of the unconscious and the spiritual plane.  As such Aquarius is also  the definite indicator for the upside down effect of the image of an egg being on the top instead of at the bottom of the tower here. As the antisign to limitations of perception through burgeois, worldly or materialistic interpretations it is part of Aquarius` natural role to retrace the original memory and dimensions of the full potentials of meaning. In art the demonstration of the reverse helps the observer to retrace the symbolical meaning of the arrangement suggested by an image, sculpture or any work of art.

Salvador Dali was born with the ascending sign in Cancer. The Moon as the astrological ruler and main planetary indicator for Dali`s individual, personal relation with the topics of Cancer was placed right conjunct midheaven in the moment of his birth. Therefore this Moon position directly relates to the motif of the symbol for Cancer being placed right on the top of houses – a motif which also occurs at the famous Dali Museum in Figueras.

The Tijuana Cultural Center in Cancer

The Tijuana Cultural Center opened on 20 October 1982 is an OMNIMAX cinema that has more than a million visitors per year. It was designed by architects Pedro Ramirez Vazques and Manuel Rossen Morrison.

Astrogeographic position for field level 3 which describes how the building and area is embedded in the town of Tijuana: located in dynamic fire sign Sagittarius the sign of style, fashion, design and playgrounds and as the sign of the bow, round forms and circles a major indicator for balls. The 2nd coordinate is in the emotional water sign Cancer the sign of the womb, eggs, fertility, motherhood, caves in general and particularly together with Sagittarius a major indicator for domes. Cancer`s colour pink the colour of the interiour skins is reflected by the pinkish-ochre colour of the egg and shell ensemble of the building.

Astrogeographic position for morphogenetic field level 4 which describes the atmosphere of the museum itself: the museum is located in self-protective, female, emotional water sign Cancer the sign of fertility, pregnancy, motherhood, the uterus, eggs and indicator here for the egg shells that stand upright as if to bear testimony of a birth that has taken place. The 2nd coordinate lies in earth sign Capricorn the opposite sign of Cancer like pointing out the exposed interior of the egg here.

Astrology and Places:  Art Nouveau in Sagittarius and Cancer
The “Secession Building” is a famous exhibition hall built in 1897/99 by Joseph Maria Olbrich as an architectural manifesto for the “Vienna Secession”  the Vienna Art Nouveau or Jugendstil movement.
Astrogeographic position: located in the mental fire sign Sagittarius the sign of design, style, decoration and composition and a major indicator for round forms and as such for the ball on top of the building. The constellation is valid for morphogenetic field level 4, which describes the atmosphere of the building itself.

The constellation of the Secession Building in Cancer with Sagittarius could possibly be read as a definiton for Art Nouveau. The aspect of Cancer would then have to be seen as the most important indicator for modernity and Sagittarius as the sign of the focus on design, style and fashion.

The second coordinate of the Secession Building is in the emotional water sign Cancer the main indicator for authenticity in modern art and architecture. If the ball on top of the house was related to the astrological meaning of Cancer the sign of fertility and motherhood it would have to be associated with either the uterus, the egg or the testicles.
An egg on top of a house appears also at the house of Dali at Port Ligat, located in Aquarius with Cancer where an egg is attached on top of a tower (phallic form). The indication here is that fertility (Cancer) is turned upside down (Aquarius). Another example for an egg in Cancer is the “Cosmic Galaxy Egg” at the American Visionary Art Museum in Baltimore which lies in the same constellation (Cancer with Aquarius) as the Dali House in Port Ligat.

The Unique Moeraki Boulders can be found on Koekohe Beach, New Zealand. Astrogeographic position: located in between Cancer and Leo. The water sign Cancer is the sign of the Moon, fertility and eggs, the natural habitat for crabs and shells and most important indicator for beaches. The highly energetic fire sign Leo is the sign of the Sun. The 2nd coordinate too is in Cancer here. Valid for field level 2 which includes the whole of the circa 5 km long beach.

Split Apple (or Egg) Rock in Cancer with Pisces

Split Apple Rock is a round granite rock near Kaiteriteri in Tasman Bay, New Zealand.

Astrogeographic position for field level: located in emotional water sign Cancer the sign of fertility, eggs, shells and islands and in the last degree of the instable, spiritual water sign Pisces the sign of the ocean.

Neptune sitting on a Shell in Cancer with Sagittarius

Berlin Neptunbrunnen (Neptune Fountain) at Alexanderplatz, berlin.|Neptune`s throne is a shell. Crabs, lobsters, crocodiles and other water animals  are gathering around him. The four water nymphs represent the rivers Rhine, Oder, Weichsel & Elbe. Rivers too are domains of the water sign Cancer. Astrogeographic position: located in the constellation of water sign Cancer with fire sign Sagittarius for radius/field level 4. Sagittarius stands for decoration, style, design, oranamentationm and also caricature!

Utoba Cave: the Vagina Shaped Sanctuary in Cancer with Scorpio

Utroba Cave (“Womb Cave”, “Cave Vulva”) is a a Thracian sanctuary carved out of the mountain between the XI and X century BC near the village of Nenkovo in the Rhodope Mountains in Bulgaria. The natural shape of the cave was used to give the sanctuary the shape of a vagina. The sanctuary therefore is supposed to have been used for the worship of a mother goddess, goddess of pregnancy and feritility rites or possibly also initiations.
Astrogeographic position for field level 4 which describes the atmosphere of the cave itself: the sanctuary is located in female water sign Cancer the sign of motherhood, the vagina, uterus, womb, fertility, pregnancy, conception, sexuality, inner perception and emotional individuality. The 2nd coordinate lies in highly defensive, solid water sign Scorpio sign of sculpting, stone carvings, sculptures in situ and fortresses. The 2 signs are also the most important astrological indicators for caves.

The Gate of the Orient – a Pathway into a Cancer ( Zone

The Gate of the Orient, Suzhou, Jiangsu, China is a 300 m tall dual skyscraper which has been ridiculed because it looks like a pair of long underpants. The project was planned to be completed in 2014.
The astrogeographic longitude of the construction site for field level 3 falls in the last degrees of the air sign Gemini, which stands for the twin tower aspect here describing the gate as a pathway and roadcrossing with 2 equal halfs. The gate is built right next to the cardinal energetic divide (water divide) between a local morphogenetic field in Gemini and one in the emotional water sign Cancer the sign of motherhood, the womb and the vagina. This topic and character of the site is reflected by the upside down V-shape of the building in such a clear way as if consciously planned to represent an entrance into the “vagina field” or field in Cancer.
The 2nd coordinate of the building of the north tower for the astrogeographical latitude of the building lies in emotional water sign Cancer  too while the south tower is situated in highly energetic, magnetic fire sign Leo.