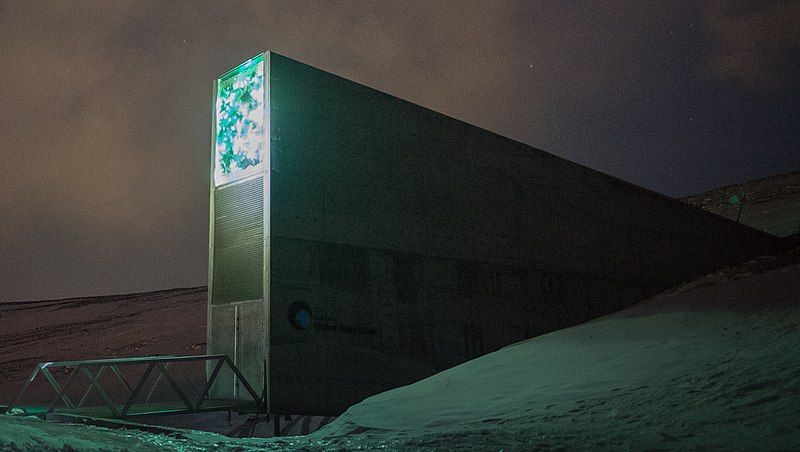 Svalbard Global Seed Vault in Astrogeography. Astrology, institutions and places: a place to save the global genetical inheritance of plants.

Svalbard Global Seed Vault is a secure seed bank on the Norwegian island of Spitsbergen near the town of Longyearbyen in the remote Arctic Svalbard archipelago, about 1,300 kilometres  from the North Pole. The construction of the facility was entirely funded by the government of Norway. groundbreaking for the construction was carried out on 19 June 2006 and the facility opened on 26 February 2008.

American conservationist Cary Fowler  in association with the Consultative Group on International Agricultural Research (CGIAR) started the seed bank to preserve plant seeds that are duplicate samples, or “spare” copies, of seeds held in gene banks worldwide. The seed vault is an attempt to insure against the loss of seeds in other genebanks during large-scale regional or global crises.
Storing seeds in the vault is free to end users, with Norway and the Global Crop Diversity Trust paying for operational costs.

Astrogeographic position for field level 4 (exact position) which explains the atmosphere and exact location of the facility: the site is located in highly defensive, self-protective, conservative, hierarchical, strict earth sign Capricorn sign of control, government institutions, hardware, bones, history and indicator for the fortress character and as the first sign of winter an indicator for the preservation of seeds through keeping them in the cold. The 2nd coordinate is in comparatively relaxed mystic, spiritual water sign Pisces sign of hiding, connecting with the spiritual plane, the higher self, and true identity, the unconscious and the dream world.

The constellation of signs describes the main issues here as conservation, defense, control and hiding in a safe place. The role of Pisces as the sign of the spiritual and highest plane or stage of  human development with Capricorn the sign of the defense and control of the social system and state could be judged to reveal the extreme importance of the issue of preserving the history (Capricorn) and memory of the essence (Pisces) of life.

Astrogeographic position for field level 3 (surrounding area) which describes how the Svalbard Global Seed Vault fortress is embedded into the land:  the construction ground is located in the third decade of highly fertile, profitable earth sign Taurus sign of the earth, grounding, roots, soil, agriculture, food, weeds and wealth and a clear indication for the extreme importance of the issue of preserving seeds for agriculture and for growing food. The second coordinate is in creative, innovative, spiritual air sign Aquarius sign of the sky, paradise, heaven and as such the guarantee for being able to remember and reconnect with the fullest potential of our ressources. Aquarius is often reduced to its role and capacity in relation to mutations. But it could play a major role not only in the development of new species but also in remembering the forgotten potential of the existing ones. As the sign of the wind Aquarius is also an important factor in regard to the distribution of seeds.

The above chart shows the day of the opening of the seed bank calculated for 12:00 midday (couldn`t find the exact time). As the exact moment of the inauguration is not known interpretation should concentrate on the positions of the planets not on their house positions in the first place.

The astrogeographical positions for field level 3 and 4 are clearly reflected in the positions of the planets except the one in Taurus.

The role of the three spiritual signs Capricorn, Aquarius and Pisces in the chart is overwhelming. Jupiter´s position right in the middle of Capricorn one of the two main astrological indicators for conservation is a clear hint at the intention to gain control over the inheritance stored in the facility. Capricorn`s ruler Saturn was located in Virgo the second most important sign of conservation or even better “preservation”.  In astrogeographical field study I have found Virgo to be the most important indicator not only for gardening, parks, science of agriculture, ecology, lastingness and protected places but also for the preservation of nature in general and of the spiritual entities of plants in particular. See the example of the Greenpeace Headquarters in Amsterdam and many other examples in my blogs. For the preservation of kings as keepers of the natural balance of the land (pharaos) in early agricultural societies see the examples of the Valley of the Kings and the Pyramid of Giza.

Mars in Gemini in opposition to intensely defensive Pluto in the first degrees of Capricorn as well as the Moon in Scorpio in a square to the Mercury – Venus conjunction indicate the high probability of threats to the seed bank through thiefs like for example global seed producing companies.