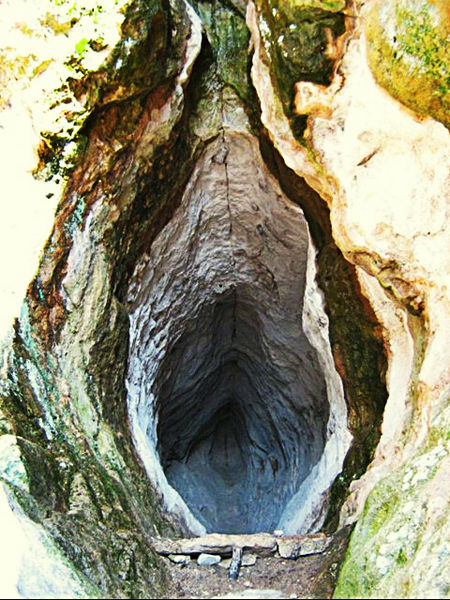 Tangardak kaya or Utroba Cave (“Womb Cave”, “Cave Vulva”) is a a Thracian sanctuary carved out of the mountain between the XI and X century BC near the village of Nenkovo in the Rhodope Mountains in  Bulgaria.  The natural shape of the cave was used to give the sanctuary the shape of a vagina. The sanctuary therefore is supposed to have been used for the worship of a mother goddess, goddess of pregnancy and feritility rites or possibly also initiations. The site of the Utroba womb cave is located only 18 km west from the highly important temple city of Perperikon.  Perperikon has been a temple site since the megalithic era. It represents the largest megalith ensemble in the Balkans and thought to be the home of the legendary Dionysus temple..

The 2 signs Cancer and Scorpio are also the most important astrological indicators for caves. In religion the combination of Cancer with Scorpio has a strong relation to topics of female sexuality and suffering. misconception,  abuse, rape, abortion and the problematic aspects of patterns of role conduct. See the parallel of the Kamakhya Mother goddess temple.

The parallel with the  Kamakhya Mother goddess temple

The Kamakhaya Mother Goddess shakti peetha temple in Guwahati, Assam is located in Scorpio with Cancer.  The site is one of the oldest extant and  one of the most important hindu and tantric shrines. The Ambubachi Mela a yearly tantric festival decicated to the menstruation of mother earth is celebrated here each year after the summer solstice when the sun moves into Cancer the sign of the uterus. This astrogeographicval example is a strong and fascinating parallel to Utroba Cave which is located in the same constellation.

Despite its strongest resonance with female sexuality the astrogeographical position Cancer is no way a limitation to topics of female gender. This can be seen from my study on the position of the 12 famous Jyotirlinga Shrines: 7 out of the 12 are located in Cancer.

On the Cardinal divide between Gemini and Cancer

Compare my arcticle:  From Gemini to Cancer –  a Pathway into a Vagina

Perperikon and the Oracle Temple of Dionysos

The site of the Utroba Cave Womb is located only 18 km west from the highly important temple city of Perperikon with it`s important oracle temple and main sanctuary of the cult of the greek god Dionysos. Perperikon is located in neutral the air sign Gemini sign of road crossings, schools, technology, communication indicating a site for connecting different regions and a focus on schools and education. 2nd coordinate of the town is in highly alert, defensive water sign Scorpio.  Scorpio relates to the fortress character of the city`s position on a single hilltop. The highly developed stone masonry work here and the fact that the fortress has been carved out of the rock on the hill are symptomatic of Scorpio too. These positions are valid for for morphogenetic field level 2 which describes the character and significance of the city for the region.