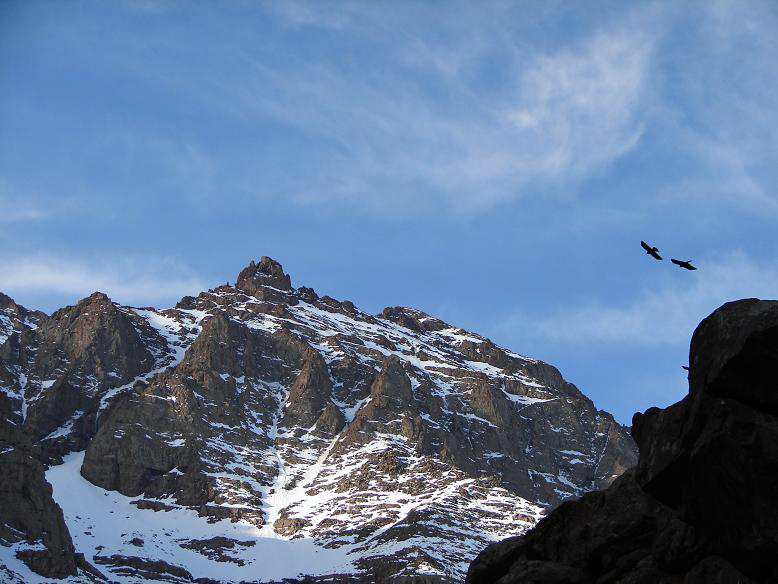 Sidi Chamharouch (King of Jinns) is a pre islamic marabou shrine located at 2350 m altitude 5 km north of the peak of Jebel Toubkal  (4167m) the highest mountain in North Africa in the Atlas Mountains in Morocco. The shrine is a giant boulder now painted white. Animals are still sacrificed daily for healing mental disease, exorcising spirits, solving problems or simply good luck and good health on a stone plateaux behind the giant rock.

From the article on Sidi Chamharouch on the pages of Jinn-Wikia:  “Shamhurish or Chaarmarouch Abbu al-Waleed (Arabic: ابا الوليد شمهورش “Shemhuresh, father of the New Born”) (al-Tayyar, the flyer), is the king of Jupiter (Musytary), the day Thursday, the color Purple, the metal Tin and is monitored by the angel Tzedeqel (صرفيائيل). It is said that he had met the Prophet Muhammad, converted to Islam, became an alim and a qadi of jinn tribes, and finally died after the beginning of the twelfth century. His successor is named Mutawakill. He had a son called Sultan al-Khal (“the black sultan”). When Semhuresh died, he also left behind a daughter, who is still alive and assists women in practicing witchcraft.……As Sidi Shamharush, Samhuras is venerated as a saint in some parts of the country, around Marrakech, as well as a court of ministers, pashas, and other traditional civil servants. He lived in the caves of mountains in the range of Goundafi in Morrocco, and he is said to be of enormous size and of malicious temper…..Shamharush likes green or white fabric. He is the offspring of al-Mushtari, lord of the planet Jupiter.”

In spite of the supposed brutality of the animal sacrifice the energetical qualities appear as rather mellow, female and sensitive and with a focus on serving the people. Experience with astrogeographical field study in India shows that animal sacrifice is actually more frequent (today) in places dedicated to the female goddesses.

Astrogeographic position for morphogenetic field level 4 which describes the atmosphere, function and energetical quality of the Sidi Chamarouch shrine: one coordinate lies in service orientated air sign Libra sign of openness, relationship, harmony, balance, justice, beauty, marriage, response, consultations and angels. Libra indicates an oracle place and all services related to consultations even though much of it may have been prohibited around 1200 years ago or longer.  In regard to the reported dependence of Jinns on the wishes of humans for manifestation on the material plane Libra is the perfect indicator here for their readiness for immediate response and service.  As the sign of angels Libra might refer to the angelic (helping) apects of Jinns although they are mostly depicted as demons. The question arising here is in how far angels and demons are the representatives of two antagonistic aspects of Libra. See the definition of Jinns from Jinn Wikia.

The 2nd coordinate lies in female, emotional water sign Cancer sign of the Moon, the subconscious, motherhood, fertility, pregancy, the uterus, family inheritance, ancestors, childhood and emotional self-centeredness, individuality and independence. Cancer stands for the topic of
The position in Cancer relates the topic of the Sidi Chamarouch shrine to the famous Kamakhaya Mother Goddess Shakti Peetha Temple – also an important site of animal sacrifice – read my blog here.