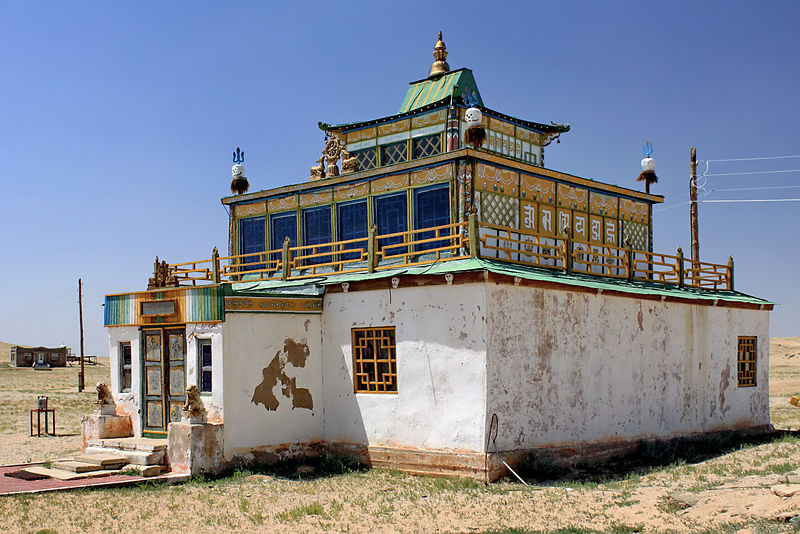 The monastery of Khamar (also Khamriin Khiidm) Monastery is a supposed candidate for a site of the strongest spiritual energy in the world. Founded in 1820 the monastery was an important Red Hat sect Buddhist monastic, cultural, and educational center in Mongolia’s Gobi Desert region until its destruction in 1937.

Khamar Monastery was founded in 1820 by Danzanravjaa, a charismatic 17-year-old lamaist monk of the Nyingma red hat school of Buddhism. Danzanravjaa chose the site of the monastery believing the surrounding area radiated with a spiritual energy fostered by the Gobi desert. To the north of the monastery lie a series of caves where monks would retreat and practice high levels of meditation for 108 continuous days (108 being a sacred number in Buddhism). Often referred to as “the Terrible Noble Saint of the Gobi”, Danzanravjaa was an educator, poet, and harsh critic of Mongolian society

The degrees fall near the exact resonance position of the equinoctical cardinal divides at the beginning (0° Aries) and the middle (0° Libra) of the zodiac – indicating topics related to an early stage of any development. Stimulation of such topics can help in recapitulating one`s original intentions and aims, stimulate action, mobilization and and encounter making decisions,

The fact that the two coordinates are nearly in opposition with each other describes the supraregional energetical resonance of the site as a topic of tension and confrontation and also of awareness and acceptance of different perspectives and opinions.