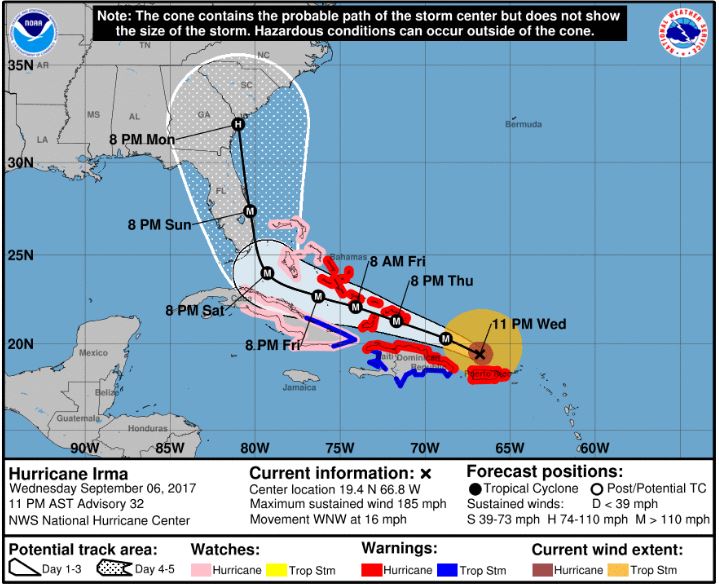 Hurricane Irma in astrogeography. Astrology & Hurricanes: the astrogeographical position of Miami and the transits of planets in relation to the “Great American Solar Eclipse”

Hurricane Irma is the first major hurricane to develop in the eastern Atlantic (east of 35°W) since Julia in 2010 and the first to develop in the “main development region” since Danny in 2015. The ninth named storm, fourth  hurricane, and second major hurricane of the 2017 Atlantic hurricane season, Irma developed as a classical Cape Verde hurricane on August 30 near the Cape Verde Islands from a tropical wave that moved off the west African coast two days prior.

Astrogeographical position of the site where what is now Hurricane Irma was upgraded to a tropical storm and given its name. Position for morphogenetical field level 1 which describes the  supra-regional, international, global level of resonance of Irma`s “birth place”: one coordinate lies on 25° Capricorn and one on 26° Aquarius.

The astrogeographical position of the location where Irma turned into a tropical storm at 26°Aquarius has a fascinating direct resonance with the US federal grand cross of major cities and central government between Washington (27°Leo), Houston, (25°Scorpio) and Miami (27°Taurus) putting extreme pressure on all three major cities.

For comparison: the astrogeographical position of the “birth place” of  Hurricane Harvey as a tropical storm and its naming on 17 August 2017 at 21:00 UT is located at 19° Pisces and 18° Taurus.

When upgraded to a tropical storm it was named Irma. That occurred during moment of a Saturn, Moon, Lilith conjunction between 21° and 22° in fire sign Sagittarius the sign of circles and a plausible indicator for the whirling movement of hurricanes.

Irma – what it refers to

From my experience with several clients of that rare name I have for a long time related it to the combination of Sagittarius with Capricorn. Irma is derived from the  Old High German word Irmīn meaning “big”. The word only appears in composed words such as irmingott (great god) or in the name of the sacred Saxon sanctuary of irminsul – a magical column that was supposed to connect Helheim (hell) with Asgard (dwelling place of the gods).

The Irminsul shrine was destroyed by Charlemagne during the saxon wars in 772. Compare my blog article: Externsteine und Irminsul aus astrogeographischer Sicht.

Astrogeographic position of Miami, Florida for morphogenetical field level 1 which decribes the town`s supra-regional, international, global level of resonance:  Miami has the coordinate for its astrogeographical longitude at 27°in earth sign Taurus in nearly exact opposition to Houston`s 25°Scorpio astrogeographical position and in exact square to the central government in Washington at 27°Leo the degree over which the “Great American Solar Eclipse” took place on August 21 2017. The parallel of the astrogeographical positions of Houston and Miami which are actually exact opposites and both in a square to the position of the central government is a phenomenon that points at the mutual reception of antagonisms of these 3 cities within the Federation of the USA.  Such grand crosses seem to be a basis of continental Union state organisations. Compare the grand astrogeographical crosses among the EU and UNASUR capitals. A Candidate for the missing fourth angle in the US Grand Cross in the last degrees of fixed sign Aquarius is Los Angeles at 21°Aquarius- 13°Sagittarius.  Compare: The Great American Solar eclipse in astrogeography

The  coordinate for the astrogeographical latitude of Miami lies at 2° in water sign Cancer the sign of islands and of beaches and river banks as the natural habitat of crabs.

The chart for the expected landfall of Hurricane Irma in Florida

Uranus near 28°Aries and  in mirrorpoint opposition to Mars on 1°Virgo explains the extreme tension between the topics of neo-fascism that Uranus and the current american government stands for and the topics of reason and  mutation of concepts for self-protection and categories of reasonable politics of humanoids when dealing with the change of climate and weather conditions on our planet as symbolized by Mars in Virgo.

The difference in the transit situation during Hurricane Irma`s expected landfall on the south east coast of the USA in regard to the Houston flood will be that Mars has left the last degrees of fixed sign Leo releasing some tension on the Grand Cross  in the last decade of the fixed signs triggered by the Great American Solar Eclipse.

But still Mercury just having regained direct movement 2 days before will be conjunct the August 21 solar eclipse position and in a square to Miami indicating that the current US governments negligence of climate change might be challenged again by the situation in Florida.

The Moon ingress in Aries on 7 September 2017 at 7:02 CST/12:02 UT will be a critical moment for the region of Miami and South Florida as the Moon through its role as the ruler of Cancer will transit the square position to that of South Florida. After that the transit of the Moon over Miami`s 27°Taurus position on the morning of 11 September 2017 on her degree of elevation indicating rainfalls can be expected as the climax of rainfalls and rise of floods in the Miami area. The resonance of the moon position will be “moving eastwards” away from the direct resonance with Miami`s astrogeographical positions on the evening of 11 September.

The North Node (indicator for the aim) of Trump`s trick to announce leaving the Paris Agreement was in a square position to Houston`s (25°Scorpio) and Miami`s (27°Taurus) astrogeographical position and opposite the position of Los Angeles (21°Aquarius).

The announcement was made on 1 June 2017 with the North Node at 28°Leo conjunct the position of the “Great American Solar Eclipse” and in a square to the astrogeographical positions of Houston and of Miami. That shows how much pressure was put on the mega-cities in the US coastal areas through the decision to neglect long-term effects of the plan of the Trumps of this world to claim, sell and burn away the fossile resources stored by nature over millions of years within one and a half century.

Trump`s move was made with the Sun – significator of his own ascending sign Leo the sign of self-centeredness at 10°Gemini the sign of the application of cleverness for fast personal profits in exact square to Neptune at 13° in his own sign Pisces the sign of the sphere of abstract, spiritual truth and lasting effects of any decision.  The antagonism of the sun position in Gemini the sign of superficial, apparent perspectives, disbelief, puberty, thieves and liars with Neptune in Pisces the sign of the spiritual, religious,  karmic and long term  aspects of any situation identifies the US president`s personal fast profits as the aim of the decision. Compare my article: When Neptune strikes back: A gold plated temple swallowed by floods

Gemini as the indicator for fake news

Gemini the sign of information and communication is the sun sign in Trump`s birth chart.  It`s outwardly, superficial approach to the interpretation of information is based on the reflex to hide the long-lasting aspects and concentrate on the practical functions and momentary effects of the way information is handled for the exploiting the profits to be made out of it. Gemini`s tension (square aspect) to the signs Virgo the sign of the protection of nature and life itself and Pisces the sign of life`s spiritual purpose explains Gemini`s tendency to neglect long-term effects and lastingness and sell these dimensions for the immediate advantages through the interpretation of information. In Duginism and Trumpism, advertisement and political propaganda and in the ideal of the archetype of an american businessman in general this aim neutralizes any superior considerations and values. In astrology this has led to the assignment of Mercury the god of thieves and liars to Gemini and of Gemini to US american culture.

In fake news an information is not considered for the purpose of a sincere attempt to overlook the whole image of a situation for the good of the eternal soul, the brotherhood and sisterhood of humans but for the personal profits and advantages gained from spreading interpretations.

Compare: What is Duginism and why it matters

Astrogeographic position of San Juan, Puerto Rico for morphogenetical field level 1 which decribes the town`s supraregional, international, global level of resonance:  the capital of Puerto Rico is located at 17°Scorpio and 9°Capricorn.

Venus as the astrological indicator for fixed earth sign Taurus the sign of the earth, grounding, growing roots, food and indicator for landslides will be moving over 17°Leo in exact square to the astrogeographical position of San Juan on 9 September describing the extreme pressure on Puerto Rico`s capital through the effects of Hurricane Irma.

Astrogeographic position of Nassau, Bahamas for morphogenetical field level 1 which decribes the town`s supraregional, international, global level of resonance: Nassau, Bahamas has both coordinates in water sign Cancer the sign of islands, beaches, coastlines, lakes and bays. The position are:  28°Cancer and 2°Cancer.

The Moon-Uranus conjunction at 28°Aries on 9 September in exact square to Nassau stands for the climax of tension on the astrogeographical position of  Nassau as the Moon. indicator for water, rain and floods and Uranus indicator for the hurricane itself are challenging the energetical situation at Nassau.

The  climax of tension for the Cuban capital and government due to Hurricane Irma can be expected for the Moon`s ingress into Taurus on 9 September 2017 around midday.

Mars and Mercury square to Charleston on September 11

Hurricane Irma is accompanied by a transit of Mars since 5 Sept and Mercury on 11 Sept over the square position to the astrogeographical position of Charleston at 1° in air sign Gemini. Mercury`s ingress in Virgo square on 11 September will be accompanied by the Moon ingress into Gemini and conjunct the astrogeographical coordinate of Charleston. The transit of the Moon indicator for rains and rivers represents the aspect of highest tension for the situation in Charleston.

Astrogeographic position of Charleston, SC for morphogenetical field level 1 which decribes the town`s supraregional, international, global level of resonance: the City of Charleston has one coordinate at 1° Gemini and the second coordinate on 23°Capricorn.