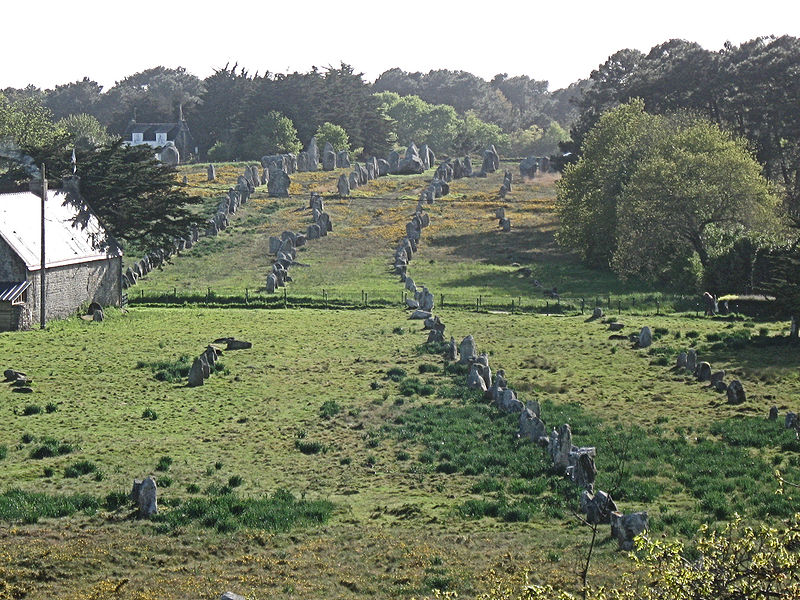 Compare: Menhir du Champ Dolent in Aquarius-Sagittarius,  The sanctuary of Locmariaquer, Saint Michaels Mount and Mont Saint Michel in Sagittarius, Le Chêne Chapelle – The Chapel Oak in astrogeography,  The Valley of the Saints of Britanny (Vallée des Saints) at Carnoët in Pisces with Scorpio, The Penis Park in Capricorn,

Carnac is a commune beside the Gulf of Morbihan on the south coast of Brittany. Carnac is famous as the site of more than 10,000 Neolithic standing stones, also known as menhirs. The stones were hewn from local rock  by the pre-Celtic people of Brittany. The Carnac stones were erected during the Neolithic period which covers the time between 4500 BC and 2000 BC with its supposed main phase of activity around 3300 BC.

One interpretation of the purpose of the stones is that successive generations visited the site to erect a stone in honour of their ancestors. The function as graveyards or places dedicated to the memory of ancestors was a frequent topic of megalithic standing stones.  Compare my article: Dolmen and Portal Tombs in astrogeography.

The astrological meaning of the two astrogeographical coordinates of Carnac for morphogenetic field level 1 which describe the supraregonal resonance of all Carnac sites together support the theory of a collection of memory stones set up to mark single people or ancestor lines. But I don`t think this is all that they were built for.

My personal experience from travels to the Atlantic coast of France is that there is a certain instability of the energetical situation near the coast. In meditations and dreaming we found thatthere is a strong  influence of endless chains of marching spirits that seem to enter the land coming from the sea and moving eastwards into the land. This phenomenon occurs at many places on our planet and of course not onlay at coastlines. At some areas it can resemble a march of armies of spirits or rather a part of the memory of individual spirits that seems to be pushed forward with the incoming winds from the sea or else be dragged inland by some fascination. In the terminology of german lanuage of geomancy it has been called the “Erlebnishüllen” (see: Marco Pogacnik) refering to something like the “sleeves of the memories of past  human experiences” which is understood as a phenomenon that is to ebe distingusished from the actual souls.  This concept would explain the bands of standing stones at Carnac to represent something like a landing strip not for the spirits of the land itself but for those that move through it. The single standing stones provide the image of  stable bodies that serve as signposts for the individual spirits to give up their restlessness

My impression is that the Carnac stones could have been built to settle this flow of energies, canalize it and help stabilize the energetical situation for the dead and the living.

There are three major alignements of standings stones near Carnac covering a band of 3,3 km :  Ménec,Kermario,Kerlescan starting from a south-west position and directed north-east.

The western end of the first and most western allignments of Le Ménec is located only 5 km to the east from the beaches of the Atlantic Sea, 2,5 km north of the beach of Quiberon Bay and 9 km west of the Gulf of Morbihan. Carnac and the 3 main alignements are located at about 20 m above sea-level while the land here is surrounded by bays and inlets under the permanent influence from the tides.

Astrogeographic positions for field levels 1 and 3

Astrogeographic position of Carnac for morphogenetic field level 1 which describes the supraregional,  worldwide resonance of the topics of the Carnac installations:  one coordinate is located on 23° in fire sign Sagittarius the sign that follows Scorpio the sign of death and graveyards making it the next stage after the death of a person. As a movable sign Sagittarius stands for a transitional stage and has several function here: it relates to the search for the aim as well as for the way that leads there. As the sign of thinking and understanding it indicates the topic of a process of the mental understanding of the souls that they are actually not alive anymore.  In this sense Sagittarius relates to the cleansing fires and hell as part of the process of overcoming the pains acculimated in the past incarnation. The Pluto-Uranus quality (Doebereiner) of the  23rd degree of Sagittarius is known for its intense confrontation of negativity, blocks of development, dependance, castration, infertility, abortion, disappointment and all topics related to the suppression of identity through patterns of gender role conduct.

The second coordinate of Carnac falls on 28° in earth sign Capricorn and into the 12th subdivision or 12th house of  the sign indicating the topics of an intermediate stage between the sign of bones (Capricorn) indicator for the attachment to the material plane and the sign of spiritual liberation and reconnection with the spiritual plane (Aquarius).

Astrogeographic position of the Ménec alignments for morphogenetic field level 3 which describes the atmosphere and energetical situation of the field where it lies: the astrogeographical longitude coordinate lies in air sign Gemini the sign of bridges, roads, links, communication, signposts, symbols, language, learning and practical magic.  The second coordinate is in earth sign Taurus the sign of the earth. grounding, roots, farmers, agriculture, food, local energetical centers, center of society, possession of land, control of territory.

These two astrogeographical coordinates do not resonate with the function of the installation as a temple site (Pisces) or place of shamantic initiation, sacrifice or worship (Sagittarius). Both signs  refer to practical topics of the material plane: Gemini to the topic of a road and to the setting up of signposts and Taurus to the topic of coming down and grounding on the material plane.

The Tumulus of St. Michel is a man built megalithic grave mound built in the fifth millennium BC. it is is 120 meters long, 70 m wide and 10 m tall.

Astrogeographical position of Tumulus Saint-Michel for morphogenetic field level 4 which describes the atmosphere, function and energetical topics of the grave mound itself: the astrogeographical longitude of the midpoint of the grave mound is located right on the cardinal divide between mystic spiritual water sign Pisces the sign of the sea, spirituality, imagination, dreaming and the most important indicator for temples and dynamic male fire sign Aries the sign of warfare, action, strength, fighting, sports and an indicator for the warrior castes. Aries resonates with the purpose of the grave mound as a site of worship of the tribal warrior caste, heroes and kings.

The second coordinate lies in creative, innovative air sign Aquarius the sign of the sky, heaven, paradise, flying,  inspiration, inventions and indicator for the artificial mount here. Aquarius stands for the hill as an elevated site and the intention to built a place for the reconnection with the heavens, higher aspects and a holistic poinz of view.

Silbury Hill: Another artificial mound located in the combination of Aquarius with Aries

The midpoint of the artificial Silbury Hill near the famous Avebury Circle  lhas one coordinate in between Aquarius and Pisces. The 2nd coordinate is located in Aries.Compare my article:  Avebury Stone Circle in astrogeography