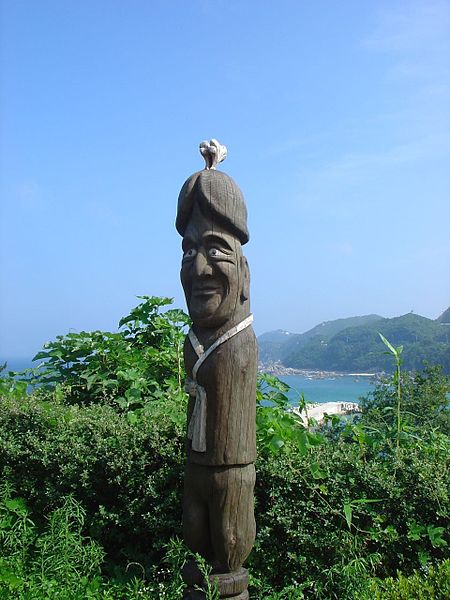 The Penis Park in Capricorn with Gemini. The Feng-Shui art of Haesindang Penis Park and the question which remedy could be helpful for the treatment and earth healing of landscapes in cases of stored emotions of loneliness, feeling deserted, rejected, undead or unborn.

The astrogeographical positions of the places where works of art are presented can serve as hints at a number of different aspects: mainly the function of the punctuation of the local morphic field of a town through a sculpture or building, the aim of presenting it where it stands. the topics of the sculpture or work of art itself and resonance topics of the artist with the work and the site too.

The Penis Park in Capricorn with Gemini

The presentation of the penis sculptures looks spectacular but they are also dealing with a really serious topic: the geomantical treatment of the restlessness of the undead. This is intensely reflected in the park`s astrogeographic position in Gemini with Capricorn.

The origins of Haesindang Park or simply “Penis Park” in the fishing port of Sinnam on the eastern coast of South Korea derive from a folk tale from centuries ago. The penis sculptures in the park are actually dedicated at supporting the peace of the souls of the local fisher women while their men have gone out on the sea with their boats for fishing. The visions of penises are meant to help the women calm down in order to make the fish in the waters feel okay and return to the fishing grounds.

This is a story about how emotions effect the morphogenetic field, how we are emotionally connected with nature and the sphere of animals, how the spirits of the undead put a weight on the morphogenetic resonance field of an area and also about the best of remedies against feeling deserted, lonely or left behind.

Here is the local legend as present on the dangerousminds page: “The basic situation is a familiar one in port and fishing cities across the span of history—as in, the husband is a sailor or a fisherman and is often away at sea while the wife waits at home. So jump back a few centuries: a maiden named Aebawi is married to a fisherman in Sinnam. One day before boarding his boat, the fisherman places his wife on some rocks, with a heartfelt promise to come back soon. But a storm intervenes and prevents his quick return, and poor Aebawi perishes after being swept from the rocks. But due to her premature demise, Aebawi’s purportedly virginal soul remains in the area, and the disquiet in the waters cause the fish to abandon the region in search of a calmer locale. Later on, a man wanders by and chooses Aebawi’s rock as a place to fish. Not wanting to leave his fishing line unattended, he drops trou and relives himself in the waters. The sight of the man’s penis pleases Aebawi’s soul, which has a calming effect on the waters, so the fish decide that they can return to the area.”

Astrogeographical position of the park for morphogenetic field level 3 which describes the energetical situation and topics of Haesindang Park: the park area is located in the combination of solid. strict, exclusive, conservative, traditional earth sign  Capricorn sign of public space, state cult, government institutions, control, separation, borders, impediments, limitations, stability, bones, calcium, hardware, mountains, rock and indicator for the hardest rock materials (granite, crystals). The position of sculptures near the sea in Capricorn seems to play an important role in the function of works of art as symbols dedicated to the stabilization of the relationship between the world of humans and the uncontrollable oceans. Important examples here are: the Little Mermaid of Copenhagen, The Singapore Merlion, The Lighthouse of Alexandria.

The astrological combination of the signs Gemini with Capricorn or its rulers Saturn and Mercury is known to stand for the topics of separation, divorce, abortion, denial, neglection, rejection, unwanted children and/or partners, lack of empathy and the spheres of the memories of spirits, souls and entities of experieneces in which they did nor make it to physical conception, were aborted, remained unborn, died in pre-natal stages or early childhood and thus remained attached to the spheres of the undead and the “Zwischenwelt”.

The astrogeographical resonance topics of the penis park collection are a clear astrological indication that park is a geomantical attempt (in the sense of earth healing) to overcome the pains and blocks of the flow of vivid energies in the landscape by the presentation of signals to the spheres of the undead and unborn.