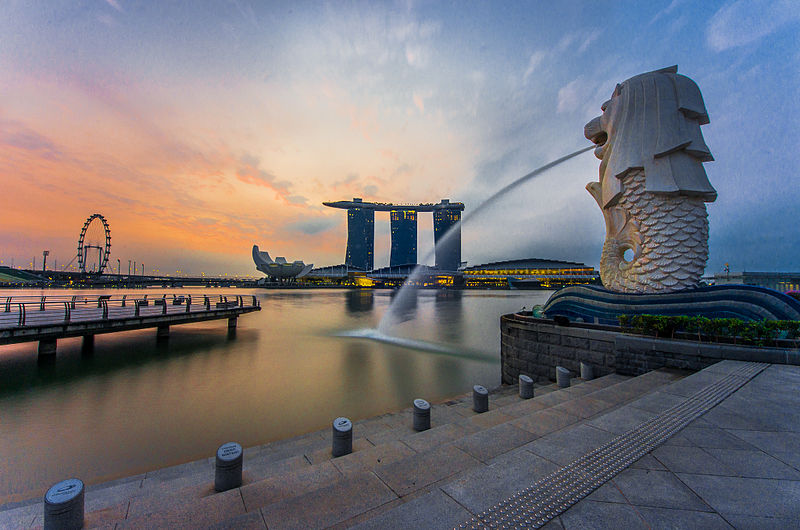 Related articles: The “Little Mermaid” as a guardian, The Penis Park in Capricorn with Gemini, Capricorn and Sagittarius – Neptune as a Guardian, Capricorn and Taurus – The Lighthouse of Alexandria, The Waterloo Lion as a Guardian of the battle fields, The Guardian Fountains on Place de la Concorde, Scorpio as the sign of sculpting,

The Merlion in Singapore as a guardian of good feng shui

The Merlion statue with the body of a fish and the head of a lion in the harbour of Singapore (“Lion City”) is a mascot and national personification of the Lion City.

Astrogeographical resonance coordinates of the position of the Merlion sculpture for morphogenetic field level 4 (exact position) which describes the energetical topics, atmosphere and function of the sculpture itself: the statue has one coordinate on the third degree of solid, traditionalist, conservative earth sign Capricorn the sign sign of public space, state cult, government institutions, control, separation, borders, impediments, limitations, stability, bones, calcium, hardware, mountains, rock and indicator for the hardest rock materials (granite, crystals). The white color of the sculptures is a resonance with the role of Capricorn as the sign of the rebirth of the Sun.

The position falls right next to the cardinal divide between Capricorn and Sagittarius (winter solstice) indicating the position of a guardian (compare “The Little Mermaid as a guardian in Capricorn”) and check-post between two worlds.

The 2nd coordinate falls in highly alert, erect, male fire sign Aries the sign of warriors and warfare.  The combination of Capricorn with Aries is of high importance as the strongest constellation of warfare and relates to the readiness to fight back attacks.

As the eighth sign from Leo (sign of light) Pisces (sign of darkness) is in no way a harmonious astrological motif for Leo at all. For the topics of Leo which are official shining royalty, self-centeredness, centralism and of bringing things to light by birth of individual self expression Pisces rather stands for hiding, moving quickly, dependence, moving through foreign territory and adaptation.In classical astrology Pisces was evaluated as the house of death for Leo.

Therefore the gesture of the Merlion as including it`s own most problematic aspect in itself is to some extend a gesture of reflecting the dependence of Singapur from the ocean. It suggests communication with the sea and could help soothe the anger of the sea in times of tsunamis or heavy storms. And it could also help incoming spirits, water gods and others spiritual entities dwelling in the ocean relate to the City of Singapur and get into communication with the people living here.

Therefore the Merlion is not a guardian that wants to frighten the spirits coming in from the sea in the first place. This is not it`s posture and expression. Even the contrary is the case here: the Merlion receives the waters and permanently exchanges water with the sea by pumping it up and spilling it back into the harbor. This gesture is so positive in the sense of being alert and aware of the powers of the ocean but without attempting any conflict.  I`m sure that this must be seen as good Feng Shui. The astrogeographical indication of the constellation of warfare here makes it clear that the Merlion is not just a puppet or just another nice sculpture but rather an essential part of the system of self protection of the city harbor.