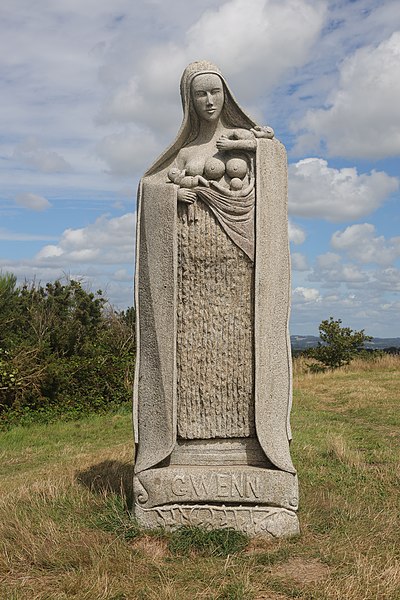 The Valley of the Saints of Britanny at Carnoët. Its astrogeographic position and the fascinating resonance of a Jupiter-Neptune conjunction.

The Valley of the Saints of Britanny at Carnoët

The Vallée des Saints (Valley of the Saints) of Britanny at Carnoët (Côtes-d’Armor)  is dedicated to the collective memory of saints and heroes of the region of Britanny.

The construction was started on 1 August 2009 with the Sun in Leo the sign of French culture and a fascinating Chiron, Jupiter, Neptune conjunction around 25° Aquarius conjunct the astrogeographic position of Paris at 27°Aquarius. The resonance with Paris explains this Breton project as part of a French national inheritance campaign. The conjunction of Jupiter or “Guru” as it is called in Hindu astrology the ruler of Sagittarius the sign of the priest and shaman castes  with Neptune the ruler of Pisces the sign of temples. spirituality, fairy tales and mystification is an ideal constellation for the worship of saints. In this 3-fold conjunction the role of Chiron as the ruler of Virgo the sign of preservation and mummification may be seen in the aim of preserving the memory of the saints, legends and traditions.

Astrogeographic position for morphogenetic field level 3 which describes how the sanctuary is embedded in the landscape and town: the site stretches right across the cardinal divide between mystic spiritual water sign Pisces sign of the ocean, mystification, imagination, legends, the unconscious, invisible, the dream world, music, reconnection with the spiritual plane and most important astrogeographical factor for temple sites and highly alert, dynamic, unicellular, male fire sign Aries sign of action, warfare, speed, soldiers and a resonator her of the topic of single standing sculptures as depictions of single personalities. Because of its relaxing effects Pisces is a highly supportive factor for allowing the presence of the holy, imaginative, absurd, artistic, spiritual and/or uncommon.
The 2nd coordinate of the site is located in solid, fixed water sign Scorpio sign of sculpting, imaging, visualization, copying, photography. stone masonry, ideology, dogma, hierarchy, fixed ideas, trauma, occultism, the underworld and underground culture.