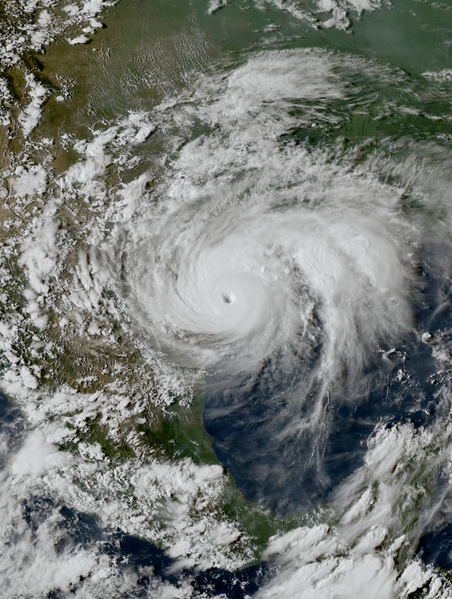 The following data is from the wiki article: Hurricane Harvey was the first hurricane to hit the state of Texas since Ike in September of 2008, and the strongest since Carla in September 1961. It is the strongest hurricane in the Gulf of Mexico since Hurricane Rita in September 2005 and the strongest to make landfall in the United States since Hurricane Charley in August  2004. It joined Matthew (September-October 2016) as one of only two U.S. hurricanes to cause an extreme wind warning to be issued, indicating “tornado-like winds” within the storm. The strongest ever recorded hurricane  in the Atlantic basin was Wilma in October 2005.  Around 03:00 UTC on August 26, the hurricane made landfall at peak intensity at Rockport with winds of 130 mph (215 km/h). Harvey became the first major hurricane to make landfall in the United States since Wilma in 2005 and the strongest in terms of wind speed to hit the country since Charley in 2004.

Astrogeographic position of Houston, Texas for morphogenetical field level 1 which decribes the supraregional, international level of resonance of Houston: one coordinate of the City of Houston lies at 25° in water sign Scorpio and the 2nd coordinate at 6°Aries. The astrogeographical position of Houston fall in exact square position to the astrogeographical coordinates of Washington and the US government at 27°Leo and 6°Cancer indicating the intense resonance and pressure from Houston on the US central government. This is important here as Hurricane Harvey hit the US coast only 4 days after the “Great American Solar Eclipse” of 21 August 2017 over Washington which took place near 29°Leo on the astrogeographical position of the US central government at 27°Leo . It has to be considered in how far the Solar Eclipse activated the unsolved issues of tension between the US central government in Washington and Houston the World capital of petroleum industries.

4 days after the solar eclipse of 21 August 2017 the conjunction of Mars at 23°Leo with the North Node on 24° Leo occupied the square position to Houston (25°Scorpio) during the landfall of Hurricane Harvey on 25 August 2017 near Rockport, TX. Mars reached the exact square position to the resonating degree of Houston at 25°Leo three days later on 28 August when the effects of the heavy rainfalls had unfolded.

A similar astrological transit (Uranus cj. North Node at 27°Leo) of tension had occurred during the landfall of Hurricane Carla still the strongest hurricane ever 56 years ago in 1961 (see chart below) indicating a strong tension between Houston and the central government at that time.Looking back on the sudden end of the J.F. Kennedy presidency in Dallas, Texas with the Sun on 29°Scorpio conjunct Houston (on 22 Nov 1963)  and square to Washington is also a topic here.

An astrological understanding of the Flooding of Houston should consider the square of Mars conjunct the North Node to the position of Houston as the most intense pressure on all topics having to do with the Texan capital of the global petroleum industries in times when Neptune strikes back.

Astrologically it was Chiron the ruler of Virgo the sign of the attempted control over the water element on the ascendant that marked the landfall of Hurricane Harvey in Texas.  Chiron`s position fell on the last degrees of Pisces the sign of the ocean and astrological indicator for the uncontrollable aspects of the water element. Neptune the ascendant ruler of Pisces in house 12 the house of spirituality, suppressed reality, supreme truth and uncontrolability was in his own sign and house (house 12).

Uranus the astrological indicator for winds and in this case for the Hurricane occupied 28°Aries and the trine position with Mars which was approaching the position of the North Node near 24°Leo  both in exact square to the astrogeographical coordinate of the City of Houston at 25°Scorpio. Hamoniuos trines between 2 planets in this case Uranus and Mars plus in the intensely dynamical fire signs Aries and Leo are astrological constellations known for the mutual stimulation that the two planets exact onto each other.

Hurricane Carla ranks as the most intense U.S. tropical cyclone landfall on the Hurricane Severity Index.

The landfall of Hurricane Carla occurred on 11 September 1961 with Uranus conjunct the North Node at 27°Leo and conjunct the astrogeographical position of the seat of the US central government in US Washington.  The positions of Uranus and North Node near 27°Leo fell into the same topics of the square position in relation to Houston at 25°Scorpio.