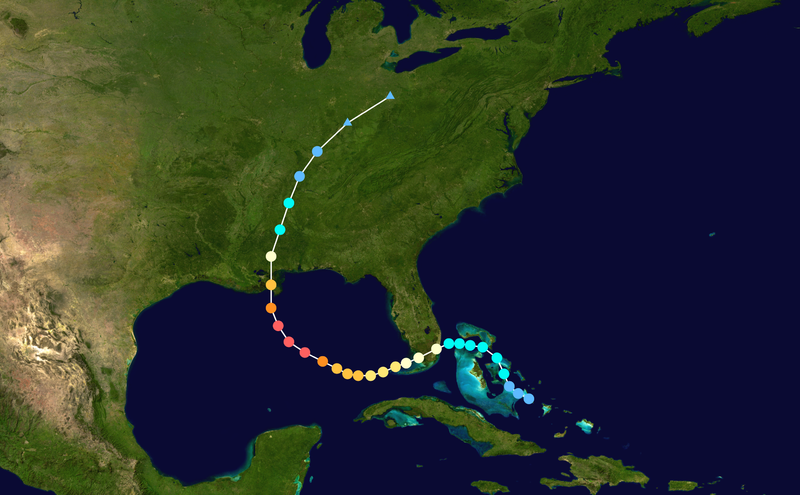 Hurricane Katrina was an extremely destructive and deadly tropical cyclone that was the costliest natural disaster and one of the five deadliest hurricanes in the history of the United States. The storm originated over the Bahamas on August 23 from the interaction between a tropical wave and the remnants of Tropical Depression Ten.

On August 29, 2005 Katrina’s storm surge caused 53 breaches to various flood protection structures in and around the greater New Orleans area, submerging 80% of the city. A June 2007 report by the American Society of Civil Engineers indicated that two-thirds of the flooding were caused by the multiple failures of the city’s floodwalls. The storm surge also devastated the coasts of Mississippi and Alabama, making Katrina the most destructive and costliest natural disaster in the history of the United States, and the deadliest hurricane since the 1928 Okeechobee Hurricane. The total damage from Katrina is estimated at $108 billion (2005 U.S. dollars)

Hurricane Katrina formed as Tropical Depression Twelve over the southeastern Bahamas on August 23, 2005, as the result of an interaction of a tropical wave and the remains of Tropical Depression Ten. It strengthened into Tropical Storm Katrina on the morning of August 24. The tropical storm moved towards Florida, and became a hurricane only two hours before making landfall between Hallandale Beach and Aventura on the morning of August 25. The storm weakened over land, but it regained hurricane status about one hour after entering the Gulf of Mexico, and it continued strengthening over open waters. Katrina made its second landfall at 11:10 UTC on August 29 as a Category 3 hurricane with sustained winds of 125 mph (200 km/h) near Buras-Triumph, Louisiana 90 km east of the City of New Orleans.

Astrogeographic position of the site of Katrinas landfall on the Buras-Triumph peninsula in Louisiana for morphogenetical field level 1 which describes the town`s and landfalls supraregional, international level of resonance: the coordinate for the astrogeographical longitude is located on 7° in creative, innovative air sign  Aquarius the sign of the sky, heaven, paradise, self-finding, inspiration and outcasts. The coordinate for the astrogeographical latitude is on 16° in dynamic fire sign Aries.

The combination of Aquarius with Aries is a typical astrogeographical aspect for peninsulas. location of the Buras-Triumph area on a peninsula. Compare: The Ship on the Hill, Reaching the Gate into Aquarius at Cape of Good Hope, The position of Saint Michaels Mount in Aquarius, Gibraltar (Aquarius-Taurus) or Sidney Opera House (Aquarius-Aries), Palm Jumeirah (Aquarius-Aries) and Península de La Magdalena (Aquarius-Sagittarius).

The flooding of the City of New Orleans through the effects of Hurricane Katrina saw a square of Mars at 15°Taurus the sign of the earth and solid ground  with  Neptune at 15° Aquarius the sign of the open sky and winds.  This means that Neptune the indicator for floods had been transiting the positions of the peninsula to the east of New Orleans over a couple of years before the Katrina event. The climax of that weakening period was reached during the inauguration of George W. Bush as US – President on 20 Jan 2001 when Neptune was stationary on the 6°Aquarius position of the place of Katrina`s landfall 4 years later. Compare:  Criticism of the government response to Hurricane Katrina. The recent transit of Neptune over the peninsula that shelters New Orleans from the sea before the Katrina flood could describe a period of increades erosion through the rise of the sea level and  also a neglection of the protection of the City sínce the year 1999 or longer.

The position of Venus conjunct the South Node and Jupiter between 14° and 18° in air sign Libra fell in exact opposition to Buras-Triumph 16°Aries astrogeographical coordinate. This intense conjunction in an air sign (air signs as significators for wind) delivers the image of a most intense pressure exerted on the topics of the town`s location on a peninsula. Especially the presence of Venus opposite the land here and in addition to Neptune´s  square to Mars in Taurus could mark intense erosion and financial losses through the hurricane. Jupiter`s role in this overall process may be seen his the expansive influence on Venus. But Jupiter has also another aspect: through his rulership over fire sign Sagittarius the sign of circles makes him a strongest candidate also for an astrological significator for the whirling of the winds and the eye in the center of the hurricane.

The following image gives you an idea of the problematic situation of New Orleans due to the fact that large areas are located below sea level and therefore highly dependent on flood walls .