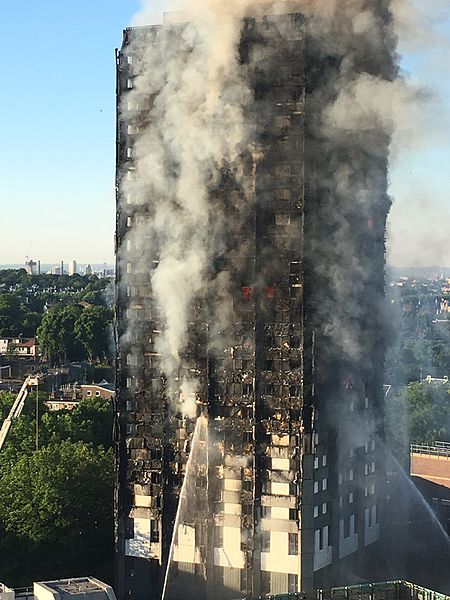 The Grenfell Tower fire in astrogeography, An analysis of the astrological event chart of the Grenfield Tower fiire and its astrogeographic position.

The Grenfell Tower fire was a large fire at the 27-storey Grenfell Tower a block of flats on the Lancaster West Estate in North Kensington, London on 14 June 2017. Grenfell Tower was built between 1972 and 1974 under the council housing system.

From the wiki article: “It was estimated there were hundreds of people in the block at the time of the fire. At least 12 are confirmed dead, with more fatalities expected to be found. 74 people have been confirmed to be in 5 hospitals across London, 20 of whom are in a critical condition.”

Compare: The Great Fire of London 350 years ago,  The Astrogeographic position of London, Saturn-Neptune conjunction over London: the Great London Smog of 1952,  The 3 June 2017 Terrorist Attack in London,  The 2017 UK general election in astrogeography, British EU Referendum on 23 June 2016

Grenfell Tower as a symbol for London`s Pluto

Catastrophic events can be manifestations of solutions of habitual blocks of the flow of energy in the morphogenetic field of the local area , city or region.  Astrogeographically the fact that the Grenfell Tower has both astrogeographical positions in Scorpio points at the resonance of topics related to Scorpio and its astrological ruler Pluto. If we consider that the Tower of London – erected by William the Conquerer as the basis for the capital status of London – is located in Scorpio too the resonance of the Grenfell Tower with London`s Pluto is getting even clearer.

Grenfell Tower has both coordinates in Scorpio

Astrogeographic position of Grenfell Tower for morphogenetic field level 4 which describes the energetical situation and topics of the tower itself: both coordinates are located in solid, fixed, mental water sign Scorpio the sign of steel, construction work, sculpting and imaging.  Scorpio describes the atmosphere of the building as of a stronghold and place of the resonance of patterns of perception derived from the imprint of habitual self-images, role conduct and social conditions and social hierarchy,  In Scorpio towers can be assumed to represent symbolic and even symptomatic manifestations of highly alert and defensive reflexes. The function of the White Tower inside the Tower of London which is located in Scorpio with Cancer as a stronghold and dungeon is an illustrative example for such towers in  London.

The astrological speculation about the resonance between the triggered astrological factors and the timeline is not just a playful consideration. It serves the examination of the possibilities to be considered in the process of events. The moment the South Node crossed the AC indicating unsolved issues (technical problems) from the past and the North Node in bright fire sign Leo on the DC indicating the visibility of the flames. Even before that at 0:20 the black moon – Lilith indicator of unconscious, ignored or suppressed issues from the past crossed midheaven in fire sign Sagittarius the sign of arson attacks. The fact that Lilith was in opposition to Mercury on the IC at the same moment indicates the strong probability of a conscious action deliberatly ignoring the danger from a broken device as the cause of the fire. This is because Mercury in his own sign and house stands for direct activity. At the same time iMercury`s  position near to the exact square to Neptune stands for negligence as the possible cause of the fire.

Pluto the indicator for Grenfell Tower`s astrogeographical position in Scorpio was in house 11 the house of emergency exists indicating that they were partly blocked.

By the time Saturn crossed the MC at 1:07 the fire brigades might have arrived trying to stop the fire.

The example of the Tower of London in Scorpio with Cancer

The central White Tower building inside the Tower of London was built by William the Conqueror in 1078.  It has played a prominent role in English history. It was besieged several times, and controlling it has been important to controlling the country. The Tower has served variously as an armoury, a treasury, a menagerie, the home of the Royal Mint, a public record office, and the home of the Crown Jewels of England.

Astrogeographic position of the Tower of London fortress for morphogenetic field level 4 which describes the energetical situation and topics of the whole fortress: The Tower of London has one coordinate in Scorpio the indicator for its fortress character. The second coordinate here lies in aristocratic air sign Libra the sign of royal courts, harmony, symmetry, justice, balance, beauty and relationship. Libra stands for the important

Astrogeographic position of the White Tower for morphogenetic field level 4 which describes the energetical situation and topics of the central dungeon tower itself: the White Tower is located in highly defensive, solid fixed water, mental water sign sign Scorpio the sign of stronghollds and self-protective, emotional water sign Cancer the sign of emotional autonomy and self-centeredness. Both signs Scorpio and Cancer – though for very different motives are known for their intensely defensive reflexes. Both signs are strongly related to physical as well as emotional pain. In this case Cancer also refers to the position next to the river bed as the natural habitat of crabs.

Comparison: I have discussed the topic of the highly defensive reflexes visible with buildings located in Cancer in this article: A WW2  “flak” tower in the sign of the crab .